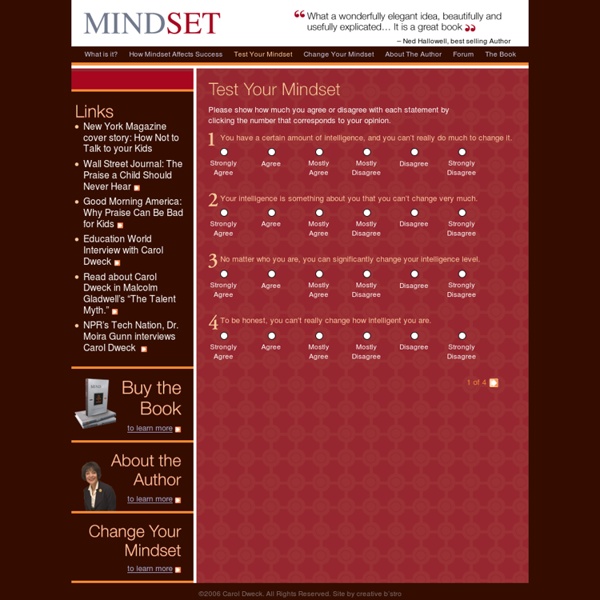 Principal: Growth Mindset Is Making a Difference at Munford Elementary | Blog... Brooke Morgan serves as Principal of Munford Elementary School in the Talladega County (AL) public schools. Dr. Morgan has over 11 years of experience in school administration and also serves as Key Leader for the district's 21st Century Teaching and Learning Network. By Dr. The research on Mindset During the summer, I reflected on Alexis’ mindset at the beginning of the year and how it transformed throughout the school year. What about our own mindsets? Research has shown that students who are told “You are so brilliant” actually fear failure more than students who are praised for their effort and determination. Ricci states, “An educator with a growth mindset believes that with effort and hard work from the learner, all students can demonstrate significant growth and therefore all students deserve opportunities for challenge.” Introducing the Mindset research into our school I felt led to share this important research and information with my staff before the first day of school.

How can you change from a fixed mindset to a growth mindset? Step1. Learn to hear your fixed mindset “voice.” As you approach a challenge, that voice might say to you “Are you sure you can do it? Maybe you don’t have the talent.” “What if you fail—you’ll be a failure” “People will laugh at you for thinking you had talent.” “If you don’t try, you can protect yourself and keep your dignity.” As you hit a setback, the voice might say, “This would have been a snap if you really had talent.” As you face criticism, you might hear yourself say, “It’s not my fault. Step 2. How you interpret challenges, setbacks, and criticism is your choice. So as you face challenges, setbacks, and criticism, listen to the fixed mindset voice and... Step 3. As you approach a challenge: THE FIXED-MINDSET says “Are you sure you can do it? THE GROWTH-MINDSET answers, “I’m not sure I can do it now, but I think I can learn to with time and effort.” FIXED MINDSET: “What if you fail—you’ll be a failure” GROWTH MINDSET: “Most successful people had failures along the way.” Then...

Mindset | The Nature of Change Whether they’re aware of it or not, all people keep a running account of what’s happening to them, what it means, and what they should do. In other words, our minds are constantly monitoring and interpreting. That’s just how we stay on track. But sometimes the interpretation process goes awry. Some people put more extreme interpretations on things that happen—and then react with exaggerated feelings of anxiety, depression, or anger. Or superiority. Mindsets frame the running account that’s taking place in people’s heads. People with a growth mindset are also constantly monitoring what’s going on, but their internal monologue is not about judging themselves and others in this way. Chapter 8 is about changing the internal monologue from a judging one to a growth-oriented one.

The Best Resources On Helping Our Students Develop A “Growth Mindset” Photo Credit: Antoine Gady via Compfight ‘Growth Mindset Starts With Us, Not With Them’ is the first post in a two-part series at my Education Week Teacher column. Also check out Here Are The Movie Scenes That Readers Have Said Demonstrate A Growth Mindset – & I’m Still Looking For More The “question of the week” at my Education Week Teacher column this week is “How Can We Help Our Students Develop a Growth Mindset?” (NOTE: You can now read Carol Dweck’s guest response to that question here). Carol Dweck, who identified the concept, will be one of the guests responding to that question, and several readers have already shared their ideas. You can find a specific lesson in my book, Helping Students Motivate Themselves, on how I incorporate the idea of a growth mindset in my classroom, and some of my other related ideas in my article in this month’s edition of ASCD Educational Leadership, Eight Things Skilled Teachers Think, Say, and Do. Here are a few previous related “The Best…” lists:

Mindset A mindset can also be seen as incident of a person's Weltanschauung or philosophy of life. For example there has been quite some interest in the typical mindset of an entrepreneur. Mindsets in politics[edit] A well-known[by whom?] example is the "Cold War mindset" prevalent in both the U.S. and USSR, which included absolute trust in two-player game theory, in the integrity of command chain, in control of nuclear materials, and in the mutual assured destruction of both in the case of war. Modern military theory attempts to challenge entrenched mindsets in dealing with asymmetric warfare, terrorism, and the proliferation of weapons of mass destruction. Collective mindsets[edit] Naturally, the question regarding the embodiment of a collective mindset comes to mind. There is a double relation between the institution embodying for example an entrepreneurial mindset and its entrepreneurial performance. Fixed mindset and growth mindset[edit] Productive mindset and defensive mindset[edit]

Omvärdera ditt tänk bild Fixed vs. Growth: The Two Basic Mindsets That Shape Our Lives “If you imagine less, less will be what you undoubtedly deserve,” Debbie Millman counseled in one of the best commencement speeches ever given, urging: “Do what you love, and don’t stop until you get what you love. Work as hard as you can, imagine immensities…” Far from Pollyanna platitude, this advice actually reflects what modern psychology knows about how belief systems about our own abilities and potential fuel our behavior and predict our success. Much of that understanding stems from the work of Stanford psychologist Carol Dweck, synthesized in her remarkably insightful Mindset: The New Psychology of Success (public library) — an inquiry into the power of our beliefs, both conscious and unconscious, and how changing even the simplest of them can have profound impact on nearly every aspect of our lives. One of the most basic beliefs we carry about ourselves, Dweck found in her research, has to do with how we view and inhabit what we consider to be our personality.

Definitions of Fixed mindset and Growth mindset Growth mindset - posters I USA har man ofta uppmuntrande posters på väggarna i skolan. Jag har nu gjort ett antal själv som jag tänker sätta upp i klassrummet. Om du vill ha någon så är du välkommen att låna. (Några fler posters har du i det här blogginlägget.) Jag lägger in den här också. growth mindset | The Coaching Journey Are geniuses born or created? What about natural goalscorers? We’ve all seen a player who just has that knack. It’s my belief that the thought process mentioned above is a seriously flawed notion that many people may hold. Whenever most athletes describe their own feats or the ability of another “worldly” superstar, usually the talk of natural ability, god given talent, or a knack for scoring (or defending, or coming up in the clutch, etc) always comes into play. An insult. First, let’s look at why I believe natural ability is a myth at the highest levels, and then let’s look at how believing in the myth has catastrophic consequences at the youth level. Something important to understand first. Everyone who describes Messi talks about his natural talent. You have to fight to reach your dream. Perhaps Messi isn’t a good example, because it’s inconceivable for many that it’s possible for a player to reach that level. Let’s take Thierry Henry as I’m biased. So what happened? Wow.