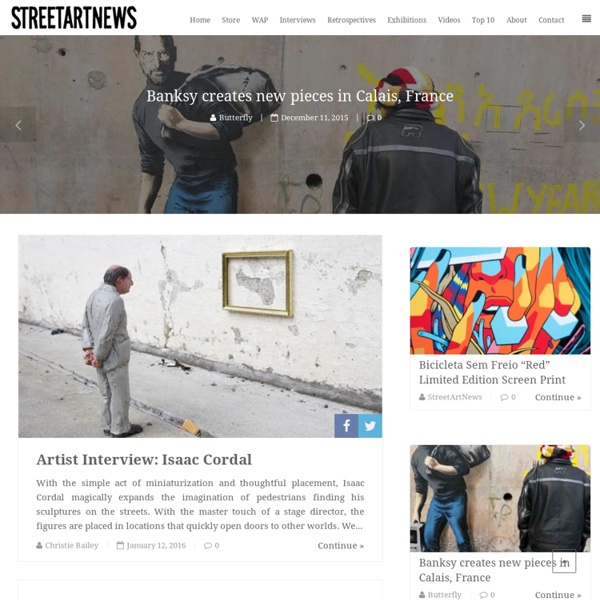 Australian street artist RONE is back in London for his first UK solo exhibition entitled 'Wallflower' at London’s StolenSpace Gallery opening today. We managed to stop by to bring you this exclusive preview. Best known for his unique depiction of beauty through his portraits of women, Rone’s show includes a stunning range of new works that he especially created for the show. The exhibition features a mix of paintings on canvas with some using wooden shipping crates as a backdrop. The transparency of the paintings based on a female muse surrounded by flowers reminds us of the short-lived nature of what we conventionally consider beautiful, sometimes blooming and dying in just a day. Continue reading for more images and make sure you stop by East London, the show runs until Early May at StolenSpace, 17 Osborn Street.

Street artist Malarky hits wall on Redchurch Street. Street Art London Redchurch Street (near Brick Lane) became a lot more colourful this weekend as street artist Malarky hit up a long wall behind Rich Mix with some of his trademark characters. We caught up with him over the two days that it took him to paint the wall. On a bit of a roll, Malarky also hit up some shutters and walls in the Brick Lane area which we’ll be featuring soon. If you’d like a little more background on Malarky, be sure to check out the great interview that Street Art London did with him back in May this year here: Malarky Interview. Here are some progress shots so you can see how the wall developed.Day 1 Day 2

Practical Creativity by Ken C. Judd Practical Creativity goes big: House Painting and Garden Design I have been painting houses, interior and exterior, for over 25 years. I'm great with color consultation if you desire, and also happy to paint whatever you have chosen yourself. I'm a craftsman as well an artist - fast and professional. Brooklyn Street Art - ...loves you more every day. : Brooklyn Street Art Posted on April 7, 2014 “After photographing in the mosh pits for awhile I began to get familiar with patterns in the music. Eventually it got to the point where I could sense the moment coming when things would really cut loose and go berserk,” says painter Dan Witz about his process and method for catching the moment when the roiling mass of hardcore music fans hit the perfect state of frenzy. “NY Hardcore Paintings”, opening this past Saturday night and on view currently at The Jonathan Levine gallery in Chelsea, presents Witz with his new body of convulsing bodies and to say they are a revelation is only part of the story. When we saw his first mosh pit paintings a few years ago we were struck by the raw thrilling chaotic energy and calculated abandon in them – and reminded of many such nights in the 80s and 90s in lower Manhattan when we also joined in the fray.

Artist milla nuzzoli About milla nuzzoli The image directory is represented by the world that surrounds me, from its multiple facets, interpreted through the filter of emotion. Through the image I opened a window on the flow of feelings, memories. The painting is the medium that allows me to process this alchemical process, is the space in which the color and shape are open to endless reading images depicted with oil paints, pastels, charcoal, watercolors. My painting, while maintaining an introspective voltage welcomes the dialectic between the abstract and the figurative, the intersection of the personal and symbolic narrative, depicting a moment in its infinite variety of expression, participation of "If", as unique and unrepeatable Act of the creative process. In my works the leitmotif is the nature â€“ individual, dualism that urges continued dialogue between rationality and emotion, figuration and abstraction.

Malarky x VNA Magazine Hookedblog regular Malarky continues to dominate the East London landscape with the addition of this new shutter above near Petticoat Lane market. The artist is set to feature in the upcoming issue of Very Nearly Almost magazine which is due for release in early December. The team at the magazine caught up with Malarky in this short video interview as he painted the featured shutter. Directed by JOÃO RETORTA Music 2Hot by JAM CIITY Blu’s Massive New Mural in Rome Turns 48 Windows into Faces View full detail Italian street artist Blu (previously) just wrapped up work on this giant mural that wraps around two sides of a building in Rome. The pieces utilizes nearly 50 windows to create the mouths and eyes of some 27 bizarre faces all vying for attention. You can see some more views of the piece on his blog and explore it in detail on Google Street View.

El Mac // Great Urban Artists // Street Art Online // Mr Pilgrim El Mac // Great Urban Artists When you are looking at more classically inspired urban artists there aren’t many with the mind blowing skills to actually pull it off. Of course there are some and one you will undoubtedly come across is El Mac. Visual Artists' Information & Networking… worldwide March 2014 MEDIA CONTACT: Paula Danoff, pdanoff@evanstonartcenter.org (847) 475-5300, ext.206 Howard Sandroff’s “The Obsessive Image” Presents a Unique Relationship between Musical Compositions and Sculptural Objects

La Pandilla New Mural In Progress, Miami Your Ultimate Street Art News Site La Pandilla is a Puerto Rican based duo, they are currently in Miami painting this new mural in the Wynwood Art Districts for Art Basel 2011. With amazing technical skills these two are up and coming, so keep 'em on your radar and check back with us soon for the completed piece.