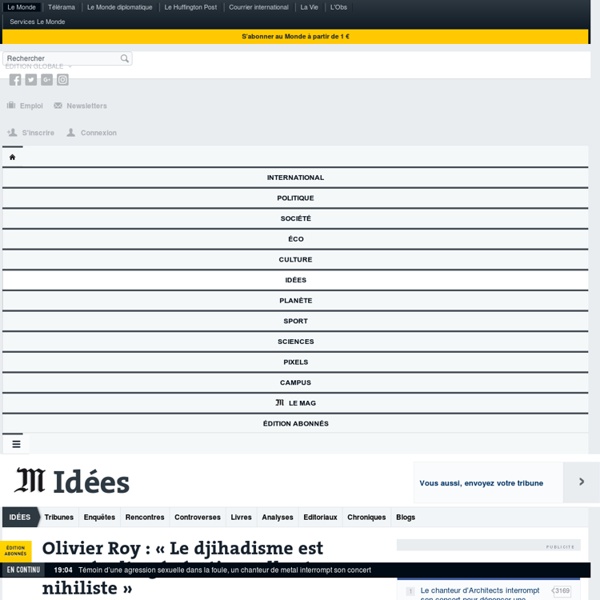 Why Is the Killer of British MP Jo Cox Not Being Called a “Terrorist”? British Labour MP Jo Cox was brutally murdered yesterday. Although the motive is not yet proven, there is mounting evidence that the detained suspect, 52-year-old white male Thomas Mair, was motivated by political ideology. Cox was an outspoken advocate for refugees. At least two witnesses say Mair, as he carried out the attack, yelled “Britain First,” the name of a virulently right-wing anti-immigrant party. He has years of affiliation with neo-Nazi groups: what Southern Poverty Law Center describes as “a long history with white nationalism.”

At up to 455 exabytes on a single gram, DNA storage could create mankind’s permanent record In the era of cloud storage and ever-recoverable user accounts, the idea of data just “disappearing” can seem downright odd. The EU has had to pass Right to be Forgotten legislation just to require companies to work to make it possible for data to go away. Yet given the sheer volume of data being generated and made available on the Internet these days, can that trend possibly persist? Tweets already pass out of easy access through Search in just a few weeks’ time. The Internet is beginning to buckle under the weight of user-generated video. Can digital storage media progress fast enough to keep up with mankind’s ability to generate 1’s and 0’s?

Trump in the White House: An Interview With Noam Chomsky Noam Chomsky speaks in Buenos Aires, Argentina, on March 12, 2015. (Photo: Ministerio de Cultura de la Nación Argentina) On November 8, 2016, Donald Trump managed to pull the biggest upset in US politics by tapping successfully into the anger of white voters and appealing to the lowest inclinations of people in a manner that would have probably impressed Nazi propagandist Joseph Goebbels himself. But what exactly does Trump's victory mean, and what can one expect from this megalomaniac when he takes over the reins of power on January 20, 2017?

By inflating Islamic extremism Cameron has lost sight of what really threatens us Sir Winston Churchill’s statue in Parliament Square should be removed to a museum. All busts and portraits of the great man in parliament and the prime minister’s residence should be taken down and placed in storage. Why? What Mass Killers Really Have in Common In the wake of the terrorist attack in Nice, France, on Thursday, Republican Newt Gingrich, perhaps still hoping (in vain, it turns out) to be tapped by Donald Trump as a vice-presidential nominee, amplified Trump’s past calls to round up Muslim suspects in an effort to stop future terrorist violence. Gingrich said that “Western civilization is in a war,” and suggested that “we should frankly test every person here who is of a Muslim background, and if they believe in Sharia, they should be deported.” Muslims who do not believe in Sharia law, Gingrich continued, would be welcome. But if Trump and Gingrich are truly looking to stem terrorism and mass violence of the sort that happened in Nice, they might do better to look to a different kind of litmus test: domestic violence and grievances against women.

CERN starts first lead collisions in upgraded Large Hadron Collider The LHC was primarily designed as a particle discovery machine. It has already spotted the Higgs boson, and the hope is that its upgrade to higher energies will allow it to uncover more. But each LHC run is capped off by a period of experimentation that has as much to do with cosmology as particle physics. Normally, the quarks and gluons that make up most of familiar matter come bundled in discrete packages like protons and neutrons. But increase the energy and density enough, and you reach conditions similar to those of the Universe a fraction of a second after the Big Bang.

It's not Muslims or people with mental health problems who are most likely to kill you in a terrorist attack – it's men Mass male violence is everywhere right now. First it was Orlando. Then Nice. And Bavaria. Munich. Kabul. The neural correlates of implicit and explicit sequence learning: Interacting networks revealed by the process dissociation procedure + Author Affiliations Abstract In two H215O PET scan experiments, we investigated the cerebral correlates of explicit and implicit knowledge in a serial reaction time (SRT) task. To do so, we used a novel application of the Process Dissociation Procedure, a behavioral paradigm that makes it possible to separately assess conscious and unconscious contributions to performance during a subsequent sequence generation task. To manipulate the extent to which the repeating sequential pattern was learned explicitly, we varied the pace of the choice reaction time task—a variable that is known to have differential effects on the extent to which sensitivity to sequence structure involves implicit or explicit knowledge.