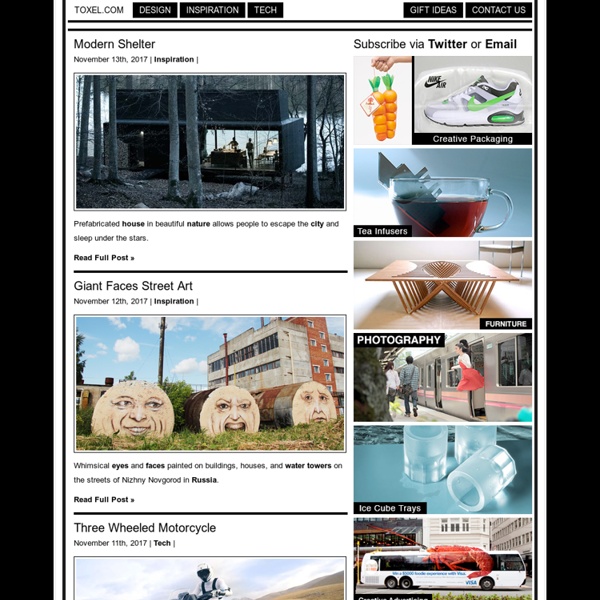 35 Brilliant Resume Designs Learn how to earn $125 or more per hour as a freelancer - Click Here Looking for hosting?. We recommend MediaTemple for web hosting. Use Code MTLOVESDESIGN for 20% off There is a part 2 to this post which is called 27 More Outstanding Resume Designs Part II. 10 Futuristic Cell Phone Concepts Collection of the most creative and interesting cell phone concepts designed by talented people from all over the globe. Weather Cell Phone Concept Beautiful cell phone concept design by Seunghan Song accurately detects and illustrates present weather conditions. [link] Mobile Script Cell Phone Concept Designed by Aleksander Mukomelov, this cell phone comes with a large touchscreen, that is located inside the phone in the collapsed state.

Art More than 400 invited guests attended the opening event of The Art Hunter in Sydney on Tuesday night. The Art Hunter launch is a collaboration between The Cool Hunter and Jaguar, and the opening night was also the Australian debut of the spectacular Jaguar C-X17 concept car. To present The Art Hunter, we engaged our dream team of collaborators, led by the incomparable Natalie Longeon, Peter Pengly and Phil Barker from The Artistry (they designed and executed our Summer Lovers store as well), to transform a 500 m2 warehouse in Alexandria into a genuinely exciting, temporary three-week art exhibition experience. The Art Hunter is not a white-walled space where you quietly walk past pieces of art.

15 Coolest Photos You Won't Believe Are Not Photoshopped Dean Potter's most recent solo walk at Taft Point in Yosemite by Photographer Jeff Cunningham. Sleeping on Heaven. Apparently, the model was just jumping! (The left-hand side is a mirror, and the right-hand side is clear glass, with another girl standing on the other side). 40+ Interesting Pinterest Boards for Designers Only recently, the startup social pinboard site Pinterest, has taken the social bookmarking scene by storm as it earned its fame as the fastest growing social networking site. Since then, Pinterest continues to grow and now it hold a #45 Alexa ranking making popular social bookmark sites like digg.com, delicious.com, stumbleupon.com look like they had better days (see screenshot from Alexa at the bottom). This soaring popularity of Pinterest has caught the attention of designers and other creative individuals, and in no time, the virtual pinboard became popular among the design community. One reason for this is the simple yet powerful Pinterest interface and how great it is for structuring work, ideas, inspiration etc. and at the same time build an online portfolio to show of some creative juice. Pinterest provide a convenient and visual way for users to see, repin and comment on other users collections and pins and the pleasure of doing this is what makes Pinterest so viral. Sonny M.

Collection of Cool Umbrella Designs Today we showcase our favorite examples of creative umbrella designs. Electric Umbrella The Electric Umbrella will glow with many pinpoints of light. Storyboard Of the thousands and thousands of micro-cultures extant today, the pursuit of bending things is a particularly niche obsession. This is the world of Bending Steel, which follows the personal journey of Chris Schoeck as he tries to find path forward to improving his body, mind, and spirit. He locates this path via the traditions of the vaudeville strongmen of Coney Island, who were known to bend nails, horseshoes, and steel bars with their hands, legs, necks, or even their hair and teeth. As Schoeck trains and challenges himself to bend, he finds a family of sorts among other would-be strongmen – the kind of kinship and validation that had eluded him for his entire life. The story culminates in a strongman show on Coney Island where Schoeck attempts to bend a steel bar that has always defeated him before, in front of his friends and a crowd of strangers who represent all his fears and doubts.

How to Use Amazon Web Services to Make a Video on Demand Service - ReadWriteCloud Google TV is about to launch. It's playing a part in the way people think about how the Internet and traditional media meet to form an entertainment experience that is new but not relegated to a traditional television set or a personal computer. Right now, television shows or movies can be converted to be seen online but it requires a digital device to view the programming. The television set can support digital media but it often lacks a browser. That's what Google is banking on will make the difference. A browser, search and content that can be seen on a television set as easily as on a digital device.