History - World Wars: Countdown to World War Two: Monday 28 August 1939. 15 Epic Facts About Napoleon Bonaparte. One of the most fascinating figures to ever live was born 246 years ago. 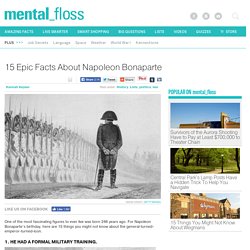 For Napoleon Bonaparte’s birthday, here are 15 things you might not know about the general-turned-emperor-turned-icon. Napoleon was born into a family of minor nobility on Corsica­—a large island off the coast of Italy—a year after it became a French territory. His parents were well off enough to send him to school in France, although he never lost his Corsican accent and claimed to have been teased for it throughout his life. As a teen, he attended the prestigious École Militaire in Paris, but when his father died in his first year there, the younger Bonaparte (whose name was actually “Napoleone di Buonaparte” before he changed it as a young adult to sound more French) was forced to graduate early to help his family financially.

Cutting his studies short caused Napoleon’s grades to suffer and he ended up graduating 42nd in a class of 58 students. All images courtesy of Getty Images unless otherwise noted. What is Napoleon Bonaparte famous for? According to BBC History, Bonaparte was born on French-held Corsica in 1769, and was sent to France to be educated. 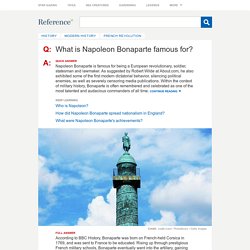 Rising up through prestigious French military schools, Bonaparte eventually went into the artillery, gaining skills which he used to great affect at the Siege of Toulon during the French Revolutionary Wars. After that battle, Napoleon's star rose quickly, and he saw further action in Italy and Egypt. In 1799, Bonaparte took part in a coup overthrowing the weak and corrupt Directory, and became the most powerful man in France under the newly installed Consulate. By 1804, the Revolution was over, and Napoleon was crowned Emperor of the French at Notre Dame Cathedral. 6 Things You Should Know About Napoleon - History in the Headlines.

Print Cite Article Details:6 Things You Should Know About Napoleon Author Jesse Greenspan Website Name History.com Year Published 2014 Title 6 Things You Should Know About Napoleon URL Access Date August 31, 2016 Publisher A+E Networks At the height of his power, Napoleon Bonaparte controlled a huge chunk of Europe, from the Iberian Peninsula in the west to present-day Poland in the east. 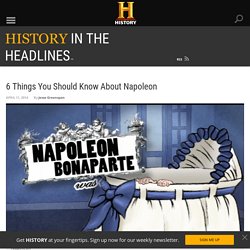 But on April 11, 1814, after a series of military setbacks culminating in the fall of Paris, he abdicated as emperor of France and was ordered into exile on the Mediterranean island of Elba. Depressed, he swallowed poison in an unsuccessful suicide attempt and then narrowly escaped an angry mob on the guarded journey to France’s southern coast. Virtual Classroom — Faculty of History. The Civil War Part 2: Crash Course US History #21. Image gallery: Le gateau des rois, / tiré au Congrès de Vienne en 1815. Veto message from the President of the United States, returning the bank bill, with his objections, &c. To the Senate ... Andrew Jackson. Washington, July 10, 1832. Herald Office. GHDI - Document. The Serfdom Patent Patent of November 1, 1781, in re Manorial Lords and Subjects. 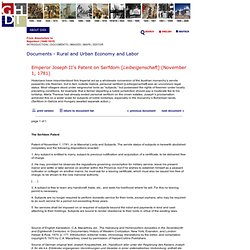 The servile status of subjects is herewith abolished completely and the following dispositions enacted: 1. Any subject is entitled to marry, subject to previous notification and acquisition of a certificate, to be delivered free of charge. 2. 3. 4. 5. Source of English translation: C.A. Source of German original text: Joseph Kropatschek, ed., Handbuch aller unter der Regierung des Kaisers Joseph II. für die k.k. Enlightenment in Austria - Reforms under Joseph II. Download Full Lesson Plan PDF Description Through an in-depth analysis of various primary and secondary sources, students in this lesson will identify, understand and be able to explain Enlightened Despotism in the Hapsburg Lands under the reign of Joseph II, in particular the decision to abolish serfdom, the legalizing of different religious denominations, and how the emperor strove to unite his divided, multinational empire under an equal system of laws. 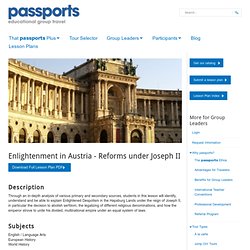