The Bots for Killing or...

Armed Ground Robots Could Join the Ukrainian Conflict Next Year. At AUSA, officials showed off a robot shaped by the hard lessons of hybrid war. 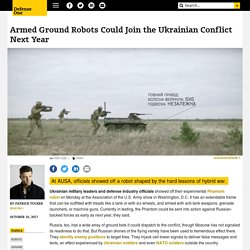 Ukrainian military leaders and defense industry officials showed off their experimental Phantom robot on Monday at the Association of the U.S. Army show in Washington, D.C. It has an extendable frame that can be outfitted with treads like a tank or with six wheels, and armed with anti-tank weapons, grenade launchers, or machine guns.

Currently in testing, the Phantom could be sent into action against Russian-backed forces as early as next year, they said. Russia, too, has a wide array of ground bots it could dispatch to the conflict, though Moscow has not signaled its readiness to do that. “What’s interesting about the Ukrainian conflict is that it’s the Ukrainian side that is developing unmanned systems it thinks will help it fight. Subscribe Receive daily email updates: Aisbq-137.pdf. The future of warfare: Why we should all be very afraid. It is said that in 16th-century Prague, a giant made of clay stalked the slums from moonrise till sunbreak. 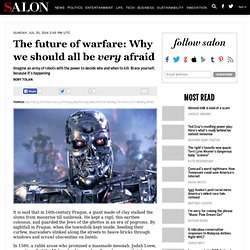 He kept a vigil, this earthen colossus, and guarded the Jews of the ghettos in an era of pogroms. By nightfall in Prague, when the townsfolk kept inside, heeding their curfew, marauders slinked along the streets to heave bricks through windows and scrawl obscenities on lintels. In 1580, a rabbi arose who promised a manmade messiah. Judah Loew, a mystic called the Maharal, whispered spells and commands into a clod of mud and sculpted a monster to crush the vandals and brutes. A clockwork man, a witless machine, the sentinel followed the rabbi’s orders to the letter: “Clear the precinct after dusk.”

Fairytales are for campfire powwows and bedside reveries. The United Nations has its own name for our latter-day golems: “lethal autonomous robotics.” The ban cannot come soon enough. Russia has given rifles to true automatons, which can slaughter at their own discretion. Smoke Rings, Mystery Backpacks and Gun-Toting Robots: The Weird Wartech of the Korean Conflict. In his documentary 'Deepsea Challenge 3D,' James Cameron shows us what it's like to climb into a cramped sphere and plunge 35,798 feet into darkness at the bottom of the ocean. 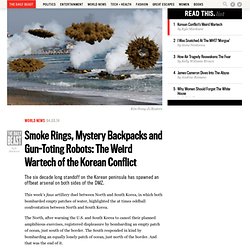 The first two explorers to reach the very bottom of the ocean—a point in the Mariana Trench 35,798 feet below the surface—were Don Walsh and Jacques Piccard. They traveled there in a submersible called Trieste. This was way back in 1960. Their feat landed them on the cover of LIFE magazine. Armed Russian robocops to defend missile bases - 23 April 2014. THE West has always been a little squeamish about the idea of arming robots. 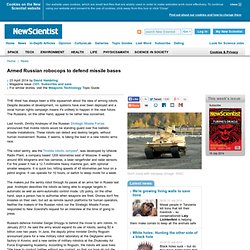 Despite decades of development, no systems have ever been deployed and a vocal human rights campaign means it's unlikely to happen in the near future. The Russians, on the other hand, appear to be rather less concerned. Last month, Dmitry Andreyev of the Russian Strategic Missile Forces announced that mobile robots would be standing guard over five ballistic missile installations. These robots can detect and destroy targets, without human involvement. Russia, it seems, is taking the lead in a new robotic arms race. The robot sentry, aka the "mobile robotic complex", was developed by Izhevsk Radio Plant, a company based 1200 kilometres east of Moscow. The makers put the sentry robot through its paces at an arms fair in Russia last year. Russia's defence minister Sergei Shoygu is behind the move to arm robots. Thomas Nash, director of Article 36, the UK-based arms control campaign group, is worried.

Stay Safe. Pentagon Shows Off Terminator-Like Robot... For Humanitarian Missions. Killer Robots: Natural Evolution, or Abomination? Ask one technologist and he or she might say that lethal autonomous weapons — machines that can select and destroy targets without human intervention — are the next step in modern warfare, a natural evolution beyond today's remotely operated drones and unmanned ground vehicles. Others will decry such systems as an abomination and a threat to International Humanitarian Law (IHL), or the Law of Armed Conflict.

The U.N. Human Rights Council has, for now, called for a moratorium on the development of killer robots. But activist groups like the International Committee for Robot Arms Control (ICRAC) want to see this class of weapon completely banned. The question is whether it is too early — or too late — for a blanket prohibition. From stones to arrows to ballistic missiles, human beings have always tried to curtail their direct involvement in combat, said Ronald Arkin, a computer scientist at Georgia Institute of Technology. Choosing targets, ranking values Of robots and men.