The Business Model Of Private Prisons. According to a report from Think Progress, there are between 1.57 and 2.4 million people incarcerated in the U.S. prison system. 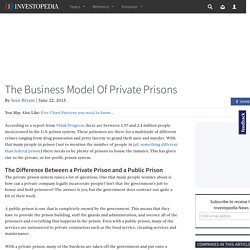 These prisoners are there for a multitude of different crimes ranging from drug possession and petty larceny to grand theft auto and murder. With that many people in prison (not to mention the number of people in jail, something different than federal prison) there needs to be plenty of prisons to house the inmates. This Is How Private Prison Companies Make Millions Even When Crime Rates Fall.

We are living in boom times for the private prison industry. 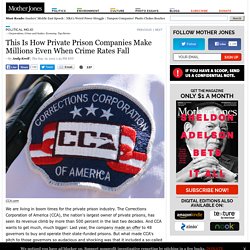 The Corrections Corporation of America (CCA), the nation's largest owner of private prisons, has seen its revenue climb by more than 500 percent in the last two decades. And CCA wants to get much, much bigger: Last year, the company made an offer to 48 governors to buy and operate their state-funded prisons. But what made CCA's pitch to those governors so audacious and shocking was that it included a so-called occupancy requirement, a clause demanding the state keep those newly privatized prisons at least 90 percent full at all times, regardless of whether crime was rising or falling. Occupancy requirements, as it turns out, are common practice within the private prison industry.

A new report by In the Public Interest, an anti-privatization group, reviewed 62 contracts for private prisons operating around the country at the local and state level. Read the full report below: Prison labor booms in US as low-cost inmates bring billions. 9 Surprising Industries Profiting Handsomely from America's Insane Prison System. It's no coincidence that the United States now imprisons more of its people than any other country in the world: mass incarceration has become a giant industry in the U.S., resulting in huge profits not only for private prison companies, but also, for everything from food companies and telecoms to all the businesses that are using prison labor to cut their manufacturing costs. 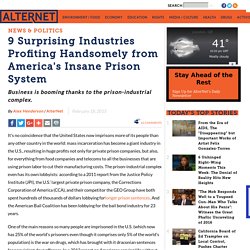 The prison-industrial complex even has its own lobbyists: according to a 2011 report from the Justice Policy Institute (JPI), the U.S.’ largest private prison company, the Corrections Corporation of America (CCA), and their competitor the GEO Group have both spent hundreds of thousands of dollars lobbying forlonger prison sentences. And the American Bail Coalition has been lobbying for the bail bond industry for 23 years. One of the main reasons so many people are imprisoned in the U.S. Reform is at odds with the agenda of many powerful industries. 1. 2. 3. 4. 5. 6. 7. 8. 9. These 7 Household Names Make a Killing Off Prison-Industrial Complex. What Do Prisoners Make for Victoria's Secret? Tens of thousands of US inmates are paid from pennies to minimum wage—minus fines and victim compensation—for everything from grunt work to firefighting to specialized labor. 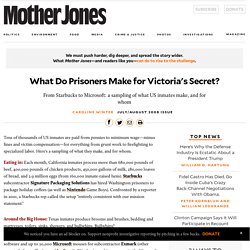 Here's a sampling of what they make, and for whom. Eating in: Each month, California inmates process more than 680,000 pounds of beef, 400,000 pounds of chicken products, 450,000 gallons of milk, 280,000 loaves of bread, and 2.9 million eggs (from 160,000 inmate-raised hens). Starbucks subcontractor Signature Packaging Solutions has hired Washington prisoners to package holiday coffees (as well as Nintendo Game Boys).

Confronted by a reporter in 2001, a Starbucks rep called the setup "entirely consistent with our mission statement. " Whole Foods, Expensive Cheese, and the Dilemma of Cheap Prison Labor. On the heels of a public apology in June by Whole Foods CEOs over allegations that the store overcharges customers for seafood, produce, and other goods weighed by the pound, the grocery chain is now receiving a fresh round of criticism for its use of cheap prison labor to produce some of those goods. 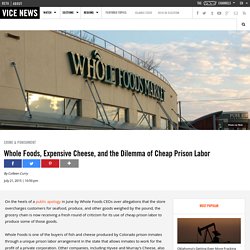 Whole Foods is one of the buyers of fish and cheese produced by Colorado prison inmates through a unique prison labor arrangement in the state that allows inmates to work for the profit of a private corporation. Other companies, including Hyvee and Murray's Cheese, also sell products made by prison laborers, though recent attention has focused squarely on Whole Foods.

Newsflash, — DJ Meph (@djmeph) June 2, 2015 — MLR (@greenrebenyc) June 4, 2015 Under the arrangement, Colorado Corrections Industries — a part of the DOC that oversees labor and the sale of goods and services — enters into contracts with private businesses that want inmates to help with the labor of producing goods.