The 100 Best, Most Interesting Blogs and Websites of 2012 (Categorized) 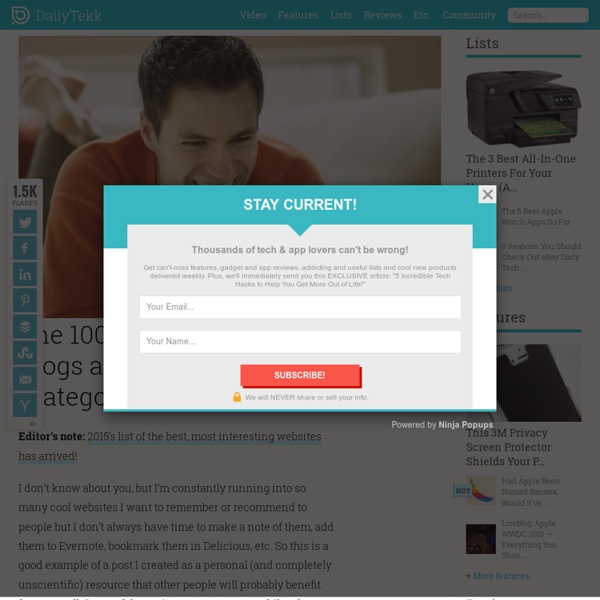 Editor’s note: 2015’s list of the best, most interesting websites has arrived! I don’t know about you, but I’m constantly running into so many cool websites I want to remember or recommend to people but I don’t always have time to make a note of them, add them to Evernote, bookmark them in Delicious, etc. So this is a good example of a post I created as a personal (and completely unscientific) resource that other people will probably benefit from as well. Some of these sites are pretty new while others have been around for a while now, but they are all awesome right now in 2012. So whether you are looking for a way to catch up on the latest Internet trends, want to find some exciting new content to load into your favorite news aggregating app or are just bored and need to waste some time online, this list represents hours of potential discovery. You might also like: Cool Curators Creativity and Design Tech & Gadgets Startups and Entrepreneurship Photos Video Living Business Miscellaneous / Other

The 100 Best, Most Interesting Blogs and Websites of 2013 Editor’s note: 2015’s list of the best, most interesting websites has arrived! Welcome to one of the web’s most anticipated lists of the year: The 100 Best, Most Interesting Blogs and Websites of 2013. This is the second such list I have made since founding DailyTekk and it’s very special. A website can only be featured ONCE in this annual series, so make sure to check out last year’s list so you don’t miss 100 other amazing sites and blogs. I’ve broken this monster list down into 19 categories and limited myself to five links per category (except for the last category) to ensure I whittled away all but what I thought were the most deserving candidates of right here and right now in 2013.

Colour my life with the chaos of trouble. Colour my life with the chaos of trouble. Photo April 05, 2014 8,298 notes xpvrvdise: dick-tations: Minimal Boolean Formulas 28. That's the minimum number of AND or OR operators you need in order to write any Boolean function of five variables. Alex Healy and I computed that in April 2010. Until then, I believe no one had ever known that little fact. List of lists of lists Some articles that consist of a list of things that are themselves about lists of things, such as the lists of lists listed below. General reference[edit] Culture and the arts[edit] Random people Her life has to be a certain way. She decided an unbearably long time ago what way that was. As a result, her life is burdened with expectations and everything she wanted for herself so long ago seems heavy, undesirable and unattainable. It is time to let go of those worn out dreams, to let go of those old ambitions and goals, but that, to her, seems as impossible as holding on to them. So now she is stuck, smothered between two lives, the one she once wanted and the one she thinks she wants now. Both lives seem impossible to live.