Killing Ugandans to save the planet

World Bank and UN carbon offset scheme 'complicit' in genocidal land grabs - NGOs. Between 2000 and 2010, a total of 500 million acres of land in Asia, Africa, Latin America and the Caribbean was acquired or negotiated under deals brokered on behalf of foreign governments or transnational corporations. 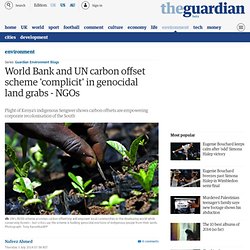 Many such deals are geared toward growing crops or biofuels for export to richer, developed countries – with the consequence that small-holder farmers are displaced from their land and lose their livelihood while local communities go hungry. The concentration of ownership of the world's farmland in the hands of powerful investors and corporations is rapidly accelerating, driven by resource scarcity and, thus, rising prices.

According to a new report by the US land rights organisation Grain: "The powerful demands of food and energy industries are shifting farmland and water away from direct local food production to the production of commodities for industrial processing. " Less known factors, however, include 'conservation' and 'carbon offsetting.' Dr. Uganda. The New Forests Company has rapidly established itself as Uganda’s biggest tree planter with more than 20,000 hectares of forestry land and is emerging as the country’s pre-eminent sustainable forestry company. 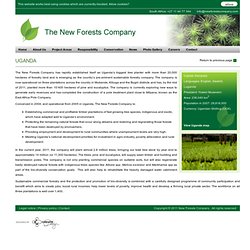 The company is now operational on three plantations across the country in Mubende, Kiboga and the Bugiri districts and has, by the mid of 2011, planted more than 10’400 hectares of pine and eucalyptus. Killing Ugandans to save the planet. Ugandan farmers have been apparently forced off their land as part of a "clean air" programme I've been urged by many readers to report on this disgraceful story: (H/T Tom Nelson and others) KICUCULA, Uganda — According to the company’s proposal to join a United Nations clean-air program, the settlers living in this area left in a “peaceful” and “voluntary” manner.People here remember it quite differently. 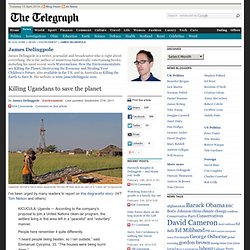 “I heard people being beaten, so I ran outside,” said Emmanuel Cyicyima, 33. Disgraceful indeed. But though credit is due to Oxfam for exposing the scandal, can anyone detect a whiff of hypocrisy here? After all, few NGOs are more assiduous than Oxfam in talking up the threat of "Global warming": And presumably, the kind of concerted action Oxfam is urging world leaders to adopt includes measures like the carbon credit scheme yielding such fat rewards for those caring, nurturing environmental types at businesses like New Forests Company.

Director Jonathan R Aisbitt is ex-Goldman Sachs. Carbon Credit Outrage: Carbon Offset Pushers Push Africans Off Their Land. The green economy has villagers seeing red in Uganda: Across Africa, some of the world’s poorest people have been thrown off land to make way for foreign investors, often uprooting local farmers so that food can be grown on a commercial scale and shipped to richer countries overseas. DASILVALAW: World Bank troops invade a... EnergyFairness: A tragic example of an env... » Armed Troops Burn Down Homes, Kill Children To Evict Ugandans In Name Of Global Warming Alex Jones. Neo-colonial land grabs carried out on behalf of World Bank-backed British company Paul Joseph Watson Infowars.com Friday, September 23, 2011 Armed troops acting on behalf of a British carbon trading company backed by the World Bank burned houses to the ground and killed children to evict Ugandans from their homes in the name of seizing land to protect against “global warming,” a shocking illustration of how the climate change con is a barbarian form of neo-colonialism. 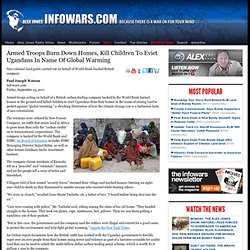 The evictions were ordered by New Forests Company, an outfit that seizes land in Africa to grow trees then sells the “carbon credits” on to transnational corporations. The company is backed by the World Bank and HSBC. Its Board of Directors includes HSBC Managing Director Sajjad Sabur, as well as other former Goldman Sachs investment bankers. Oxfam GB. UN and the World Bank now involved in land theft over carbon credit scheme - National Finance Examiner. George Monbiot: The western appetite for biofuels is causing starvation in the poor world. It doesn't get madder than this. 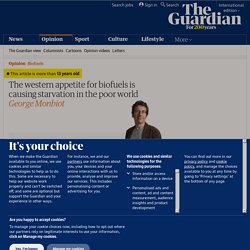 Swaziland is in the grip of a famine and receiving emergency food aid. Forty per cent of its people are facing acute food shortages. So what has the government decided to export? Biofuel made from one of its staple crops, cassava. The government has allocated several thousand hectares of farmland to ethanol production in the district of Lavumisa, which happens to be the place worst hit by drought. This is one of many examples of a trade that was described last month by Jean Ziegler, the UN's special rapporteur, as "a crime against humanity".

Even the International Monetary Fund, always ready to immolate the poor on the altar of business, now warns that using food to produce biofuels "might further strain already tight supplies of arable land and water all over the world, thereby pushing food prices up even further". The cost of rice has risen by 20% over the past year, maize by 50%, wheat by 100%. Www.monbiot.com. Oxfam calls on the New Forests Company to investigate Uganda land grabs claims. Ugandan villagers evicted to make way for forestry company - video. US universities in Africa 'land grab' Ethiopia at centre of land grab.

The new African land grab. The "town" chief of the village seemed to be in a state of shock. 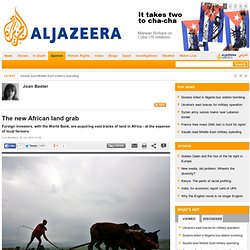 Sitting on the front porch of his mud and thatch home in Pujehun District in southern Sierra Leone, he struggled to find words that could explain how he had signed away the land that sustained his family and his community. He said he was coerced by his Paramount Chief, told that whether he agreed, or not, his land would still be taken and his small oil palm stand destroyed. Ugandan Troops Burn Homes, Kill Children In Name Of Globull Warming. British firm illegally evicts 20,000 Ugandans. The revelation is contained in a report, Land and Power, released on Thursday by British NGO Oxfam, which notes that speculators, pension funds and global agri-businesses from rich countries have been quietly acquiring large chunks of land in developing countries such as Uganda, South Sudan and Indonesia, leading to conflict, hunger and human rights abuses. 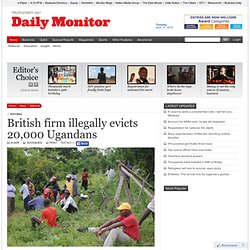 Oxfam reported that many evictees told of how they were forcibly removed and have been left destitute, without enough food or money to send their children to school. Oxfam: Communities in #Uganda tol... EU, World Bank Brutalize Africans for “Carbon Credits” Under the guise of saving the environment from global warming and climate change, armed enforcers reportedly burned locals’ houses to the ground — along with at least one child who was inside his home when it was set ablaze. 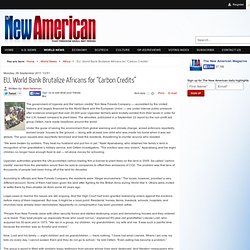 The goon squads also reportedly terrorized and beat the residents, threatening to murder anyone who resisted. “We were beaten by soldiers. They beat my husband and put him in jail,” Naiki Apanabang, who obtained her family’s land in recognition of her grandfather’s military service, told Oxfam investigators. “The eviction was very violent.” Apanabang and her eight children no longer have enough food to eat — let alone money for schooling.