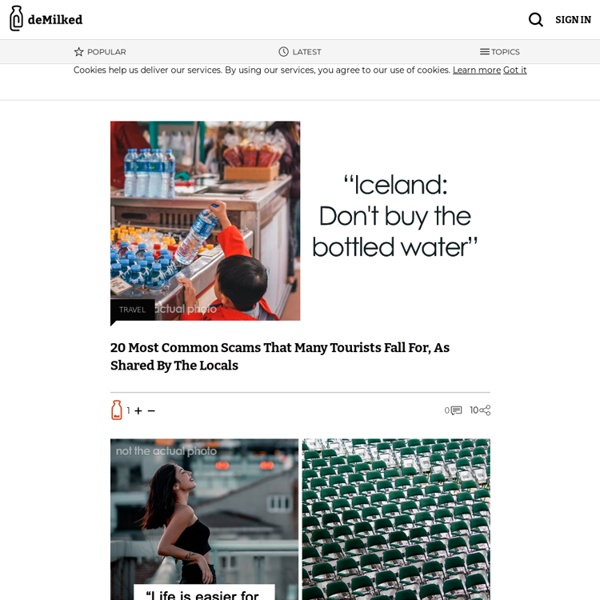 16-Year-Old Artist Wins The National Art Competition With Her Impressive Hyper-Realistic Pencil Drawing 16-Year-Old artist Shania McDonagh has just won the top prize at the annual Texaco Children’s Art Competition for her sensational pencil portrait. The new Irish star artist has been drawing since she was 12 years old and has stunned the world with "Coleman," her hyper-realistic pencil portrait of an elderly man. Can You Find Momo The Hide-And-Seek Dog? Andrew Knapp and his beautiful dog Momo the border collie, which we previously wrote about here, have a unique on-going game that they play with thousands of fans all over the world. The two best buddies have been find tons of great locations for Momo to hide in everywhere they go - urban areas, shops,...

Michael Tittel: Behavior This week we are sharing work submitted to Lenscratch… It does not happen often, but every now and then I will catch someone sneaking a candid of me in public. It is the photographer in me that relates to the strides taken for the perfect image, and because of this I always pretend I cannot see them. I shake their presence off in hopes that I embodied what they needed, that in some way I managed to help them in their quest for a perfect image. Michael Tittel’s photographs satisfy my curiosity for all the photos of me I do not know, that I have not seen. His portrayal of people touches on the humor in coincidence, and brings an evocative narrative to the casual.

How to Make Difficult Conversations Easy: 7 Steps From a Clinical Psychologist Someone is screaming in your face at the top of their lungs. Or ranting angrily and you can’t get a word in edgewise. Or maybe they’re sobbing so hard you can barely understand what they’re saying. We’ve all been there. These situations don’t happen a lot (thank god) but we all feel helpless when they do.

ABOUT US Hi there! So here’s our story…. This is how it all started… From Newspapers, Magazines, Journals, Books to Websites, Blogs, Twitter Profiles and Quota accounts, we, just like the other youngsters, were attracted to the process of information assimilation and drawing conclusions based on those pieces of information. But, what was the impact of that consumption? We never contemplated on that and life showcased us examples of the effect of what kind of information or news we consumed.

Blog Each year brings with it new challenges for web designers and 2014 is no different. In order to meet the diverse challenges that are thrown at you, your fundamentals need to be clear, but that’s not all. You need to be able to predict and identify these challenges and make sure you’ve a solution in place for them. Web design is a domain that was always competitive, but it’s becoming more so over the years. As a designer, your talent will be judged on the basis of whether you were able to face down a designing challenge and come up trumps. This will help you differentiate your services from that of your competitors.

You are one? You are alone? You are by yourself? - The scenic route back to Kathmandu with my imaginary friends.... Advertisement "Yes, yes, yes I know, I'm a billy no mates and have no friends", is what I felt like saying after the 6th person in two hours spoke or gestured, combined usually with a look of concern or confusion, to ask whether I was on my own. I was beginning to get the feeling that in everyday Nepal, ie. outside of the tourist bubble I'd been living in, perhaps women didn't travel on their own.... I was staying in Bandipur, some three hours from Pokhara, having decided to take the scenic route back to Kathmandu. I'd finished my Annapurna trek with a day being shaken around (as much as is possible when there are four squished into a row) in the back of various jeeps as we travelled a road that was in parts more rock and less road.

What to eat before, during and after the London Marathon - Women's Health © Shutterstock It has finally arrived; the London marathon is back for another year! You've been training hard and eating right for weeks, so now is the time to ensure that all your hard work doesn't go to waste. Keep reading to find out which foods will help boost your energy before you begin, sustain and replenish you as you power through, and help you recover from the gruelling exercise afterwards. Before your run Contemporary Photography I made this series with the desire to build a set of symbolic portraits inspired by my background of double cultures. I'm French with Middle Eastern origins. I worked by using the pictorial tradition of still lives. I chose to put forward characters where the nature and objects they carry come from different rites and customs.

Aquaculture Solaiman Sheik shows off the harvest from his father’s small pond near Khulna, Bangladesh: freshwater prawns, a profitable export. The family also raises fish in the pond and, in the dry season, rice fertilized by fish waste—a polyculture that has tripled output with little environmental downside. Photograph by Jim Richardson In a dark, dank warehouse in the Blue Ridge foothills of Virginia, Bill Martin picks up a bucket of brown pellets and slings them into a long concrete tank. Fat, white tilapia the size of dinner plates boil to the surface. Martin, president of Blue Ridge Aquaculture, one of the world’s largest indoor fish farms, smiles at the feeding frenzy.

Future - Welcome to a home for the insatiably curious What is BBC Future? Well, for starters we are about so much more than making predictions. Our mission statement is simple: "Making you smarter every day." The latest in style and grooming, food and drink, business, lifestyle, culture, sports, restaurants, nightlife, travel and power. Ah the iPhone. A wonderful piece of technology that has made it come to be that no one can go 10 minutes without checking them and needs them permanently attached to their hip. Yet, despite us all being obsessed with our iPhones, we really don’t know all they can do very well at all. Here are 10 things might not know about what your iPhone can do. Take a Burst of Photos at Once Hold down the shutter and it will take lost of photos in quick succession.The Power of Airplane Mode

Features « Paper Journal Features Martin Kollar – Nothing Special Pierre Le Hors Elusive acid finally created After more than a century of searching, chemists have finally nabbed a legendary acid. The acid called cyanoform or tricyanomethane appears widely in textbooks as one of the strongest carbon-based acids known. Yet despite attempts to make the acid dating back to 1896, cyanoform has evaded chemists until now.