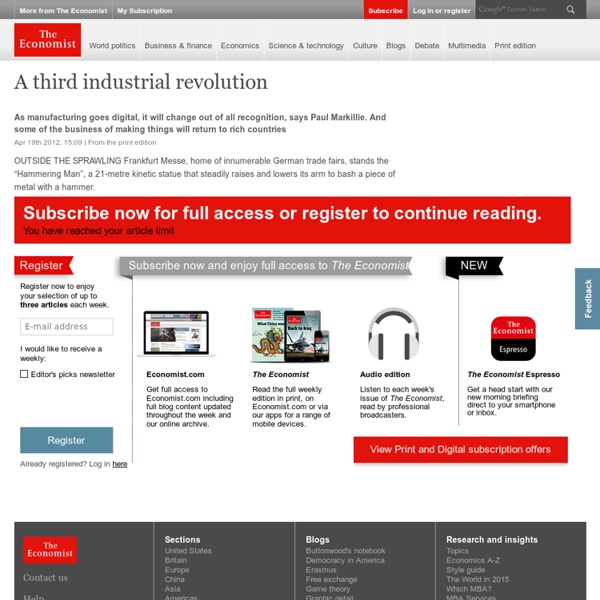 OUTSIDE THE SPRAWLING Frankfurt Messe, home of innumerable German trade fairs, stands the “Hammering Man”, a 21-metre kinetic statue that steadily raises and lowers its arm to bash a piece of metal with a hammer. Jonathan Borofsky, the artist who built it, says it is a celebration of the worker using his mind and hands to create the world we live in. That is a familiar story. But now the tools are changing in a number of remarkable ways that will transform the future of manufacturing. One of those big trade fairs held in Frankfurt is EuroMold, which shows machines for making prototypes of products, the tools needed to put those things into production and all manner of other manufacturing kit. Old-school engineers worked with lathes, drills, stamping presses and moulding machines.

Comment une antenne imprimée en 3D pourrait changer Manufacturing 0 Flares Twitter 0 Facebook 0 Google+ 0 Pin It Share 0 LinkedIn 0 inShare0 Reddit 0 0 Flares × Many people question the utility of 3D printers because they believe they’re only capable of printing simple plastic parts. 3D printers are capable of much more. For a while now they’ve been creating objects from glass, ceramic, and metals, among other basic materials. Transplant jaw made by 3D printer claimed as first 6 February 2012Last updated at 09:07 ET A computer model of the fitted 3D-printed jaw is shown next to an image of the manufactured part A 3D printer-created lower jaw has been fitted to an 83-year-old woman's face in what doctors say is the first operation of its kind.

The open source way Open exchange We can learn more from each other when information is open. A free exchange of ideas is critical to creating an environment where people are allowed to learn and use existing information toward creating new ideas. Rapport McKinsey identifie également l'impression 3D comme une technologie disruptive clé 1 Flares Twitter 0 Facebook 0 Google+ 1 Pin It Share 0 LinkedIn 0 inShare0 Reddit 0 1 Flares × James Manyika and other researchers at McKinsey have identified 3D printing as a key disruptive technology and believe by 2025 it will have a significant impact on the global economy. They forecast that by 2025, 3D printing in total could have an economic impact of $230 – $550 billion based on its ability to reduce cost and create value through customization.

Print you own counterfeit trainers: Is 3D piracy closer than we think? Pirate Bay starts offering 'blueprints' of 3D objects to 'steal'People would steal designs then 'print out' objectsCopyright groups say if it takes off, 'Everything would go out the window' By Amy Oliver Updated: 20:01 GMT, 1 February 2012 'Stealing' trainers by downloading a blueprint then covertly printing out a 'copy' at home may seem like the work of science fiction. But the concept could be a reality sooner than we think. Black LGBT Feminist Confronts Dr. Umar Johnson & Gets Schooled On The Black Struggle - Urban Intellectuals Not many in the black community lay down the truth like Dr. Umar Johnson has done over the years. Nevertheless, everyone doesn’t love everything that comes out of his mouth. Specifically, many in the feminist and LGBT community find his speech offensive and demeaning to the woman’s movement and the gay community. Fortunately for us, video was captured during a Q&A session where a black LGBT feminist confronted Dr.

Potential Cost, Eco & Functional Benefits of 3D Printing Mobile Device Antennae Optomec Inc, an often overlooked OEM of industrial 3D printers, recently announced the development of a digital production solution that enables the direct printing of mobile device antennae. This solution is based on Optomec’s proprietary Aerosol Jet Printed Electronics technology, an Additive Manufacturing (AM) process used to print electronics directly on to 3D surfaces. For this application, the Aerosol Jet technology is used to directly print 3D antennae onto plastic inserts and enclosures for smart phones and other devices. As well as functional benefits, such as reducing the overall thickness of the handheld devices, the new 3D-printed antenna solution may potentially also reduce logistics, material consumption and overall processing and offer health & safety and environmental benefits. This is because the process eliminates the use of chemical plating and the hazardous nickel content used in current manufacturing methods.

3D Printed Meats May Soon Be on the Menu Ready for the latest oddity to come out of the 3D printing craze? A startup wants to create 3D printed meat to fill the human craving for animal protein without continuing to take an environmental toll on the planet. According to Cnet, billionaire Peter Thiel is directing between $250,000 to $350,000 from his philanthropic foundation toward Missouri-based Modern Meadow to create the bio-printed meat. Applications électroniques imprimés pour l'impression 3D Conformal Printed Antenna Dual Band Antennaprinted with Aerosol Jet Direct Write process Aerosol Jet Printing Process Highlight for Antenna Low cost – no plating, simplified logistics Standard plastics – no additives or coating Digital process– flexible, no hard tooling Environment friendly – no harsh chemicals Health Benefits – no exposure to Nickel Scalable – prints up to 4 cases simultaneously High Machine output – average 30,000 units/week Good antenna performance – comparable to other methods A new high volume process will soon be available which will lower manufacturing costs for antennas used in mobile devices. The new process works with standard injection molded plastics - no special additives or coatings are required.