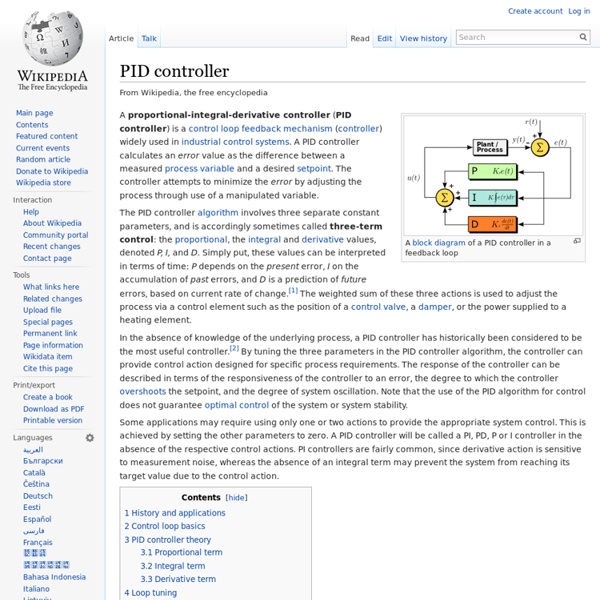 Some applications may require using only one or two actions to provide the appropriate system control. This is achieved by setting the other parameters to zero. A PID controller will be called a PI, PD, P or I controller in the absence of the respective control actions. PI controllers are fairly common, since derivative action is sensitive to measurement noise, whereas the absence of an integral term may prevent the system from reaching its target value due to the control action. History and applications[edit] PID theory developed by observing the action of helmsmen. The Navy ultimately did not adopt the system, due to resistance by personnel. Electronic analog controllers can be made from a solid-state or tube amplifier, a capacitor and a resistor. Most modern PID controllers in industry are implemented in programmable logic controllers (PLCs) or as a panel-mounted digital controller. Control loop basics[edit] The sensed water temperature is the process variable (PV). where : Error and . . Related:  PID controllers • Industrial

Discrete PID Controllers Before discussing the design of digital control algorithms, let us consider discrete equivalents of analog controllers. This includes electronic controllers, which although discrete in nature, implements control by emulating the continuous nature of analog control strategies. A typical example is the electronic PI/PID algorithm. PI/PID Controller Design from the Time domain Consider the ideal PID controller written in the continuous time domain form: To discretise the controller, we need to approximate the integral and the derivative terms to forms suitable for computation by a computer. and The discretised PID algorithm is therefore: which is now in the form of a difference equation, suitable for coding in an appropriate programming language. Back to top PI/PID Controller Design from the Laplace Domain We can also formulate discrete PID controllers directly from the Laplace domain. Say we apply the backward difference method. Simplification yields: term in the approximation.

Industrial Internet The industrial internet is a term coined by General Electric[1] and refers to the integration of complex physical machinery with networked sensors and software. The industrial Internet draws together fields such as machine learning, big data, the Internet of things, machine-to-machine communication and Cyber-physical system to ingest data from machines, analyze it (often in real-time), and use it to adjust operations. As of 27 March 2014, the Industrial Internet Consortium (IIC) was founded by AT&T, Cisco, General Electric, IBM, and Intel to bring together industry players—from multinational corporations to academia and governments—to accelerate the development, adoption and wide-spread use of Industrial Internet technologies.[2] Examples[edit] The Google driverless car takes in environmental data from roof-mounted LIDAR, uses machine-vision techniques to identify road geometry and obstacles, and controls the car’s throttle, brakes and steering mechanism in real-time.[3] See also[edit]

Applications: Cellular Remote Monitoring Anatomy Of A Feedback Control System Here is the classic block diagram of a process under PID Control. What’s going on this diagram? The Setpoint (SP) is the value that we want the process to be. For example, the temperature control system in our house may have a SP of 22°C. “we want the heating and cooling process in our house to achieve a steady temperature of as close to 22°C as possible” The PID controller looks at the setpoint and compares it with the actual value of the Process Variable (PV). If the SP and the PV are the same – then the controller is a very happy little box. However, if there is a disparity between the SP and the PV we have an error and corrective action is needed. Let’s imagine the temperature PV in our house is higher than the SP. The sensor picks up the lower temperature, feeds that back to the controller, the controller sees that the “temperature error” is not as great because the PV (temperature) has dropped and the air con is turned down a little. Derivatives

CTM: PID Tutorial In this tutorial we will introduce a simple yet versatile feedback compensator structure, the Proportional-Integral-Derivative (PID) controller. We will discuss the effect of each of the pid parameters on the closed-loop dynamics and demonstrate how to use a PID controller to improve the system performance. Key MATLAB commands used in this tutorial are: tf , step , pid , feedback , pidtool , pidtune Contents PID Overview In this tutorial, we will consider the following unity feedback system: The output of a PID controller, equal to the control input to the plant, in the time-domain is as follows: First, let's take a look at how the PID controller works in a closed-loop system using the schematic shown above. ) represents the tracking error, the difference between the desired input value ( ) and the actual output ( ). ) will be sent to the PID controller, and the controller computes both the derivative and the integral of this error signal. ) to the plant is equal to the proportional gain ( ).

PID Controller For Lego Mindstorms Robots A PID Controller is a common technique used to control a wide variety of machinery including vehicles, robots and even rockets. The complete mathematical description of a PID Controller is fairly complex but a much simpler understanding is really all that is needed to use a PID effectively. This document is a description of how to create a PID Controller for use with Lego Mindstorms Robots using the NXT-G programming language. It will be easier if we have an actual task in mind so I will describe how to create a PID to do line following. A PID is really pretty straight forward and the typical description of a PID is easily understood by anyone that has had Calculus. So lets start with the basic layout of a robot that would be suitable for line following. Our goal is to get the robot to follow the fat black line. Line followers can be built with one light sensor, or two, or a dozen or however many you happen to have. Lets try to fix that. This approach works better than the first one.

Hysteresis Such loops may occur purely because of a dynamic lag between input and output. This effect disappears as the input changes more slowly. This effect meets the description of hysteresis given above, but is often referred to as rate-dependent hysteresis to distinguish it from hysteresis with a more durable memory effect. Etymology and history[edit] The term "hysteresis" is derived from ὑστέρησις, an ancient Greek word meaning "deficiency" or "lagging behind". Some early work on describing hysteresis in mechanical systems was performed by James Clerk Maxwell. Types of hysteresis[edit] Rate-dependent[edit] One type of hysteresis is a simple lag between input and output. Such behavior can occur in linear systems, and a more general form of response is where i is the instantaneous response and d is the impulse response to an impulse that occurred time units in the past. This kind of hysteresis is often referred to as rate-dependent hysteresis. Rate-independent[edit] Hysteresis in engineering[edit]

Automation Automation or automatic control, is the use of various control systems for operating equipment such as machinery, processes in factories, boilers and heat treating ovens, switching in telephone networks, steering and stabilization of ships, aircraft and other applications with minimal or reduced human intervention. Some processes have been completely automated. The biggest benefit of automation is that it saves labor, however, it is also used to save energy and materials and to improve quality, accuracy and precision. The term automation, inspired by the earlier word automatic (coming from automaton), was not widely used before 1947, when General Motors established the automation department.[1] It was during this time that industry was rapidly adopting feedback controllers, which were introduced in the 1930s.[2] Automation has been achieved by various means including mechanical, hydraulic, pneumatic, electrical, electronic and computers, usually in combination. Types of automation[edit]

Panasonic Tech Insights: Electronic Components, Factory Automation and Lighting Solutions Articles Tuning a control loop – PID – is the adjustment of its control parameters (gain/proportional band, integral gain/reset, derivative gain/rate) to the optimum values for the desired control response. Stability (bounded oscillation) is a basic requirement, but beyond that, different systems have different behavior, different applications have different requirements, and requirements may conflict with one another. PID tuning is a difficult problem, even though there are only three parameters and in principle is simple to describe, because it must satisfy complex criteria within the limitations of PID control. There are accordingly various methods for loop tuning, and more sophisticated techniques are the subject of patents; this section describes some traditional manual method for loop tuning. Manual Tuning If the system must remain online, first set Ti and Td values to zero*. * Use minimum value possible in case PID Functions (F355 & F356) doesn’t allows you to use zero as a valid number.

Modbus Modbus is a serial communications protocol originally published by Modicon (now Schneider Electric) in 1979 for use with its programmable logic controllers (PLCs). Simple and robust, it has since become a de facto standard communication protocol, and it is now a commonly available means of connecting industrial electronic devices.[1] The main reasons for the use of Modbus in the industrial environment are: developed with industrial applications in mindopenly published and royalty-freeeasy to deploy and maintainmoves raw bits or words without placing many restrictions on vendors Modbus enables communication among many (approximately 240) devices connected to the same network, for example a system that measures temperature and humidity and communicates the results to a computer. Modbus is often used to connect a supervisory computer with a remote terminal unit (RTU) in supervisory control and data acquisition (SCADA) systems. Communication and devices[edit] Frame format[edit]

Tuning Examples Click on the graph to see it enlarged in a new window. Open loop test From this we determine process gain, delay time etc and can estimate... Zeigler-Nichols settings which almost invariably have too litttle gain and/or integral action Too little integral action, i.e. too large an reset time, is characterised by a sluggish return to the setpoint, here zero on the graph. Too much gain or integral But this is what a bit too much of both will look like. Less gain ... ... and not quite enough integral, as offset is not removed. Too much integral i.e. reset time too small ... ... and hard to judge whether gain is OK. Not enough integral ... but now with reduced integral (i.e. Unstable And here there is much too much of everything! Classic `quarter amplitude decay' This is what the book says we should look for. Personal preference But we'd often prefer something like this. The initial deviation is only slightly larger, but the plant settles down much faster.