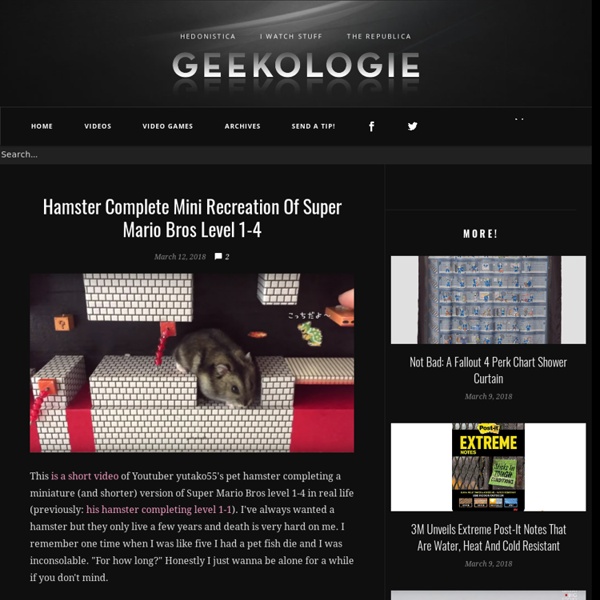 Beautiful Shots Of Clone Trooper Action Figures IRL This is a photographic series by Malaysian photographer Zahir Batin of clone trooper toys doing their thing in real life. It's reminiscent of this photo series of how stormtroopers spend their day off. If I was a clone trooper, you know what I would do in my spare time? Kill Darth Vader. Then I would be a rebel hero and, hopefully, be rewarded with the most beautiful Ewok bride in the whole treehouse village.

Two Suns? Twin Stars Could Be Visible From Earth By 2012 By Dean Praetorius | HuffingtonPost.com Earth could be getting a second sun, at least temporarily. Dr. Brad Carter, Senior Lecturer of Physics at the University of Southern Queensland, outlined the scenario to news.com.au. Betelgeuse, one of the night sky’s brightest stars, is losing mass, indicating it is collapsing. It could run out of fuel and go super-nova at any time. Blog 500px Shop offers you the best photography supplements, carefully curated by our team. We’ll introduce high quality and useful products to make your lives easier and your photography experiences even more amazing. Today we bring you the Photographer’s Pouch, designed and produced by Will Kortum. We caught up with him to talk about his product and his love of photography. Hi Will!

HyperEpos Responding to the lack of genre-based sites on the web, I've gathered here an array of sites focused on epic poetry, aiming for the occasionally quirky as well as the canonical vision of the genre. In addition to the links to individual poems and poets, I've tried to incorporate a few key sites for chronological study. Thus, links to sites like Perseus, The Labyrinth or Romantic Circles, with all their wealth of connections, are included at the bottom of the appropriate page. Your comments and suggestions for inclusion or updating are appreciated.

Reuben Margolin’s Kinetic Wave Sculptures Our Mechanics theme brought to mind San Francisco Bay Area kinetic sculptor Reuben Margolin, one of my all-time favorite artists. He makes mind-blowing, moving art based on tiny observations in nature. His collection of waves has the ability to quiet, soothe, and inspire awe in the viewer. Margolin combines math and simple materials (and insanely neat string and pulley systems) to recreate and amplify subtle effects that often go unnoticed in nature, like a tiny ripple or the movement of a caterpillar.

Hey, Let's Fix The Internet We're Forgetting To Not Be Jerks in Real Life When web-surfing became too boring in the early days, which happened almost instantly, me and my other twelve-year-old friends would stumble into anonymous chatrooms and stir s**t up. Just go in, figure out what was important to everyone chatting, and then talk about how s****y it was. Then we'd giggle and leave. We never meant any harm by it, we were just bored, and curious, and stupid, and going into a chatroom to make fun of a bunch of strangers was our version of making prank phone calls, (though, yes, we also made prank phone calls).

AFP Hall of Fame « AwkwardFamilyPhotos.com No babies were hurt in the making of this photo. Here is Dad’s story: We had just finished up a family reunion in California and decided to do some family pictures on the final day. Before this photo was taken, we had just spent time getting about 18 people (many of whom were kids) to pose for a large family picture. Those with young ‘uns can attest that sitting still and smiling for the camera are like torture to a 4 year old, so by the time we had finished with the large family we had used up all of my 4 year old’s good graces and he was in a sour mood.

American Woodworker With the October 2014 issue, American Woodworker merged with Popular Woodworking Magazine. PWM welcomes subscribers to AW; in issues to come, we also welcome some of the best-known and best-loved authors from AW – Alan Lacer, Spike Carlsen and more. AW subscribers will receive an issue of PWM for each remaining issue on an AW order. Inside every issue of Popular Woodworking Magazine, you’ll discover expert woodworking techniques, tricks and inspiring projects from some of the best-known names in woodworking (Toshio Odate, Jeff Miller, Don Williams, Christopher Schwarz and Mike Dunbar, to name just a few). Welcome!

Heads Up, Hoverboarders: Here Comes Quantum Levitation Few motifs of science fiction cinema have been more appealing to us than the subtle defiance of gravity offered by futuristic hovercraft. So every once in a while we check in to see how humanity is progressing on that front, and whether the promise of hoverboards will be delivered by 2015 as evidenced in Back to the Future Part 2. We’re not quite there yet, but we’re definitely getting off the ground, so to speak. Get ready to hover your brain around the art of quantum levitation. Star Wars on Earth Design Art Cartoons Cars About Follow RSS Advertise Search Star Wars on Earth - /by @42concepts . Written by Thomas Baekdal | Wednesday, February 08, 2012 Color Survey Results « xkcd Who in the rainbow can draw the line where the violet tint ends and the orange tint begins? Distinctly we see the difference of the colors, but where exactly does the one first blendingly enter into the other? So with sanity and insanity. —Herman Melville, Billy Budd Orange, red? I don’t know what to believe anymore!

Salute yo’Suit Women wearing female clothes is not a very novel concept. Women wearing mens clothes is probably even less novel. Women wearing womens clothes designed to emulate those of the male variety–here sparks a bit of interest. I used to have a theory about women being drawn to mens clothing for the sake of quantifying an absolute sense of equality among our gender counterpants–this is a typo I will not fix, the pun is serendipitous. Borowitz Report Our privacy promise The New Yorker's Strongbox is designed to let you communicate with our writers and editors with greater anonymity and security than afforded by conventional e-mail. When you visit or use our public Strongbox server at The New Yorker and our parent company, Condé Nast, will not record your I.P. address or information about your browser, computer, or operating system, nor will we embed third-party content or deliver cookies to your browser. Strongbox servers are under the physical control of The New Yorker and Condé Nast. Strongbox is designed to be accessed only through a “hidden service” on the Tor anonymity network, which is set up to conceal both your online and physical location from us and to offer full end-to-end encryption for your communications with us.