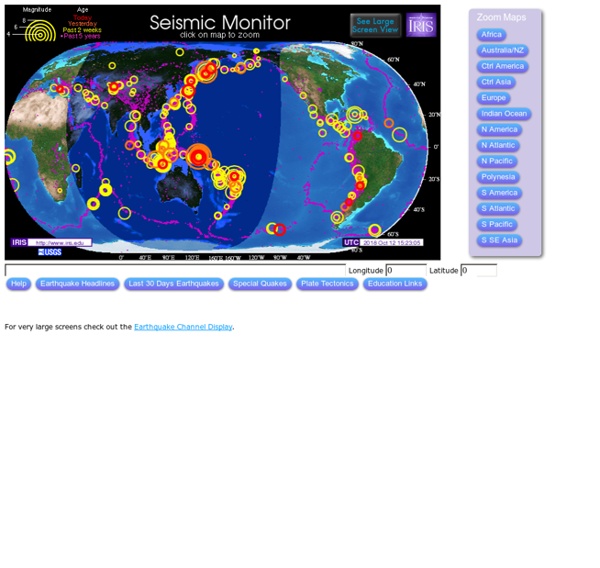 Map Tunnelling Tool Tunnel to the Other Side of the Earth Have you ever wondered which part of the other side of the earth is directly below you? Find out using this map tunnelling tool. Map Tunnelling Tool Options Unlink Zoom between Map 1 and Map 2 How You Can Make Good Use Of Your Old Machines Almost everyone reading the articles on this site will have spare computers languishing about. The rapid growth and improvements in hardware means that we cycle through a whole machine in only a few years. If you have spare machines and parts languishing about, you can put them to good use! In this article I have outlined some of the purposes your old hardware can serve. Like the article? Trafic Aérien en Temps Réel Created in 2009 by Laurent Duval, this website did not have a business vocation, it was just a passion about flying machines. On April 14th 2010 the icelandic volcano Eyjafjöll went into eruption, and cause the cessation of a major part of the air traffic in Europe. Our website was overwhelm with connections and stay offline for half a day before it can progressibely be in service again. Thank to Guillaume Esnault of the company Digicube for his help, and the whole contributor. We decide in June 2010 to create a company named Openskymap, to respond to the users' expectations. Despite the buzz and numerous prices, the company had to end its activity in november 2012 because of a lack of significant client...

World Sunlight Map Watch the sun rise and set all over the world on this real-time, computer-generated illustration of the earth's patterns of sunlight and darkness. The clouds are updated daily with current weather satellite imagery. The Mercator projection used here is one way of looking at the spherical earth as a flat map. Used since the 16th century for navigation, straight lines on this map can be used accurately as compass bearings but the size and shape of continents are distorted. Compare this with Peters, Mollweide or equirectangular projection maps. World's largest solar plant powers up - Green Living - Environment Big almost beyond belief, it is powerful, clean and looks unlike any power station you could ever imagine. Spread over terrain which covers the equivalent of 210 football pitches, there is nothing to see behind the security fences and drainage ditches but interminable lines of gleaming, eerily silent, parabolic mirrors. They gyrate simultaneously to follow the sun's path through the sky – for all the world like an enormous Star Wars android army awaiting orders from above to destroy the local populace. The bleak, empty flatlands of the Guadix plateau, 30 miles from Granada, were chosen by the backers of Andasol, a joint venture by four German companies, as the location for their €350m (£293bn) investment because, at 1,100 metres above sea level, Guadix's atmosphere is clearer and less turbulent than lower altitudes. Purely because of that, it captures more solar energy than the entire Saudi Arabian peninsula.

Could cold spot in the sky be a bruise from a collision with a parallel universe? Scientists have long tried to explain the origin of a mysterious, large and anomalously cold region of the sky. In 2015, they came close to figuring it out as a study showed it to be a “supervoid” in which the density of galaxies is much lower than it is in the rest of the universe. However, other studies haven’t managed to replicate the result. Now new research led by Durham University, submitted for publication in the Monthly Notices of the Royal Astronomical Society, suggests the supervoid theory doesn’t hold up.

Wind Map An invisible, ancient source of energy surrounds us—energy that powered the first explorations of the world, and that may be a key to the future. This map shows you the delicate tracery of wind flowing over the US. The wind map is a personal art project, not associated with any company. We've done our best to make this as accurate as possible, but can't make any guarantees about the correctness of the data or our software.

Schrödinger’s Cat: Explained Erwin Schrödinger was born in Vienna on August 12, 1887 and was awarded the Nobel Prize in Physics in 1933. He is best known for his work regarding quantum theory, particularly about his thought experiment involving a cat in order to explain the flawed interpretation of quantum superposition. The Copenhagen Interpretation of quantum mechanics essentially states that an object in a physical system can simultaneously exist in all possible configurations, but observing the system forces the system to collapse and forces the object into just one of those possible states. Schrödinger disagreed with this interpretation.