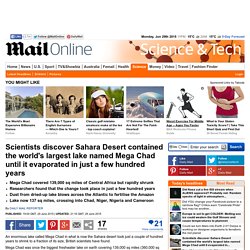 Study: Vast Underground Ocean Discovered Near Earth's Core. Scientists have discovered vast water reserves near Earth’s mantle, a finding that could reshape our understanding of where Earth’s water came from. 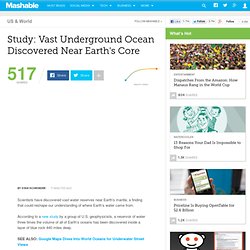 According to a new study by a group of U.S. geophysicists, a reservoir of water three times the volume of all of Earth’s oceans has been discovered inside a layer of blue rock 440 miles deep. Geophysicist Steve Jacobsen of Northwestern University, who coauthored the study, says it’s evidence the planet’s water bubbled up from somewhere underground. The water is thought to be trapped in a layer of ringwoodite, a rock with a crystalline structure that acts like a sponge, to attract and trap the hydrogen and oxygen atoms that comprise water. Erosion tries to destroy the evidence, but geologists crack the case. Geologists frequently examine sedimentary rocks in order to reveal the history they record. 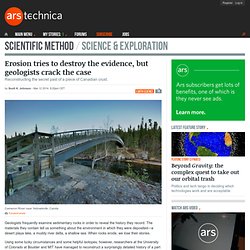 The materials they contain tell us something about the environment in which they were deposited—a desert playa lake, a muddy river delta, a shallow sea. When rocks erode, we lose their stories. Mantle Flux Discovery Could Explain Earth's Origins. July 17, 2013 Brett Smith for redOrbit.com – Your Universe Online One of the more popular theories surrounding the formation of the planets involves the countless collisions of smaller objects in orbit around the sun 4.5 billion years ago. 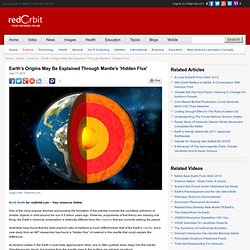 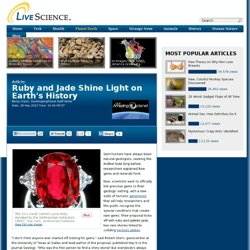 Now, scientists want to officially link precious gems to their geologic setting, with a new suite of tectonic gemstones that will help researchers and the public recognize the special conditions that create rare gems. Their proposal kicks off with ruby and jadeite jade, two rare stones linked to colliding tectonic plates . "I don't think anyone ever started off looking for gems," said Robert Stern, geoscientist at the University of Texas at Dallas and lead author of the proposal, published May 9 in the journal Geology. Grand Canyon is actually 65million years older than thought. By Daily Mail Reporter Published: 19:12 GMT, 29 November 2012 | Updated: 21:29 GMT, 29 November 2012 The Grand Canyon's outstanding beauty has certainly stood the test of time - and now it has emerged that time is actually 65million years older than previously thought. 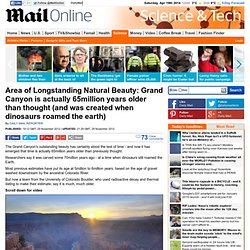 Researchers say it was carved some 70million years ago - at a time when dinosaurs still roamed the Earth. Most previous estimates have put its age at 5million to 6million years, based on the age of gravel washed downstream by the ancestral Colorado River. But now a team from the Unviersity of Colorado Boulder, who used radioactive decay and thermal dating to make their estimate, say it is much, much older. Scroll down for video. Age of oldest rocks off by millions of years - space - 29 March 2012. China running out of 'rare earth materials' By Eddie Wrenn Published: 14:25 GMT, 20 June 2012 | Updated: 16:26 GMT, 20 June 2012 China's rare earth reserves account for approximately 23 percent of the world's total - but are being excessively exploited, the Chinese government has said. 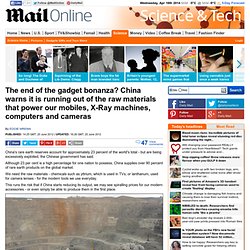 Although 23 per cent is a high percentage for one nation to possess, China supplies over 90 percent of rare earth products on the global market. Agate Basics. This web page contains the following sections: Agates are semi-precious gemstones that are a variegated form of chalcedony (pronounced kal-sed'-nee), which is silicon dioxide in the form of microscopic fibrous quartz crystals. 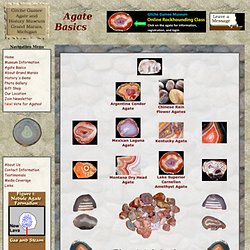 Agates naturally develop when an empty pocket inside a host rock fills in molecule-by-molecule, layer-by-layer as these microcrystals self organize to form concentric bands or other patterns. The colors and arrangement of the microcrystals are influenced by changes in pressure, temperature, and mineral content that occur during the formation process. Unlike other gemstones, each agate is unique. Even slabs cut from the same specimen will vary in color and design.

Soil’s Hidden Secrets. Scientists around the world are closing in on some dirty truths about carbon emissions and climate change. belterz/Istockphoto DIFFERENT DIRTS | Soils are divided into orders depending on their characteristics and the environment in which they form. 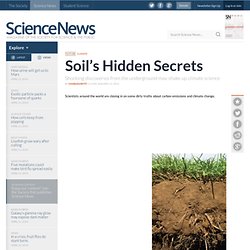 While the moderately leached alfisols are common in forests, organic histosols are prevalent in peat bogs. Finding out what microbes reside in each soil type and how those organisms react when the ground warms is key to understanding soil’s role in climate change. Natural History Museum, London - Fossil Dept. Conventional Wisdom Regarding Oil Origins May Be Wrong. Review of Black Gold Stranglehold: The Myth of Scarcity and the Politics of Oil Jerome R. 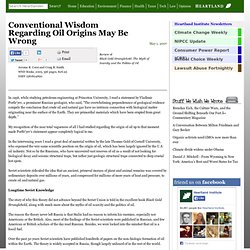 Corsi and Craig R. Smith WND Books, 2005, 356 pages, $26.95 ISBN 1581824890 In 1956, while studying petroleum engineering at Princeton University, I read a statement by Vladimir Porfir’yev, a prominent Russian geologist, who said, “The overwhelming preponderance of geological evidence compels the conclusion that crude oil and natural gas have no intrinsic connection with biological matter originating near the surface of the Earth. They are primordial materials which have been erupted from great depth.”