Scotland's geological foundations - Scottish Natural Heritage. The five geologically distinct foundation blocks which make up Scotland were once separate by hundreds of kilometres. 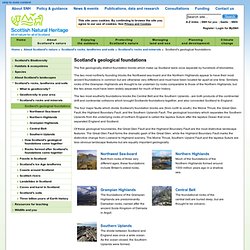 The two most northerly founding blocks the Northwest sea-board and the Northern Highlands appear to have their most ancient foundations in common but are otherwise very different and must have been located far apart at one time. Geology of Scotland. An early geological map of Central Scotland The geology of Scotland is unusually varied for a country of its size, with a large number of differing geological features.[1] There are three main geographical sub-divisions: the Highlands and Islands is a diverse area which lies to the north and west of the Highland Boundary Fault; the Central Lowlands is a rift valley mainly comprising Paleozoic formations; and the Southern Uplands, which lie south of the Southern Uplands Fault, are largely composed of Silurian deposits. 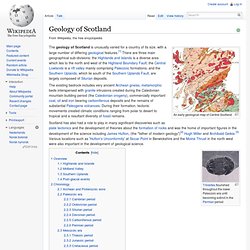 The existing bedrock includes very ancient Archean gneiss, metamorphic beds interspersed with granite intrusions created during the Caledonian mountain building period (the Caledonian orogeny), commercially important coal, oil and iron bearing carboniferous deposits and the remains of substantial Paleogene volcanoes. During their formation, tectonic movements created climatic conditions ranging from polar to desert to tropical and a resultant diversity of fossil remains. Geology of Scotland. Distinct fossils first made their appearance around 540 million years ago when marine organisms developed shells or carapaces that had a reasonable chance of preservation. 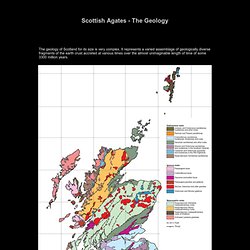 Major changes in the evolution of life, particularly as indicated by animal fossils provide the basis for useful time breaks. There are three principal time divisions, or Eras, primarily based on such palaeontological evidence: The Palaeozoic – extending from 540 to 250 million years ago The Mezozoic – from about 250 to 60 million years ago The Cainozoic – from the end of the Mesozoic to the present day. Collectively these three Eras are known as the Phanerozoic. Each of these “Eras” is then sub-divided into a number of “Periods” [See diagram] In Scotland there is no evidence of volcanic activity in the Mesozoic Era, which consists of the Triassic, Jurassic and the Cretaceous Periods.

This timescale is used by geologists to describe the timing and relationship between events that have occured during Earth's history. Nature and geography of Scotland. With over 11,000km of coastline, hundreds of islands, majestic mountains and beautiful canals, rivers and lochs, Scotland’s landscape and distinct geography offers a stunning mix of unique and inspiring habitats for you to explore. Scotland’s nature and geography will take your breath away. Read more Discover over 1,400 Sites of Special Scientific Interest (SSSI) and 47 National Nature Reserves (NNR) each containing some of Scotland’s most dramatic scenery and threatened wildlife.

These rich and diverse habitats range from the sub arctic wilderness of the mountainous Cairngorms National Park , with its numerous arctic landforms and rare alpine plants, to the rare blanket bog of Caithness, and the unique low-lying, flower rich machair lands of the Hebridean coast, one of the most unique habitats in Europe. 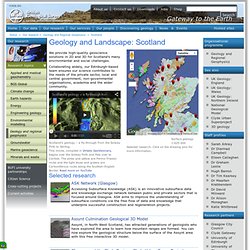