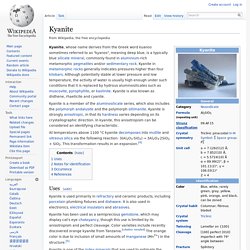 Kyanite in metamorphic rocks generally indicates pressures higher than four kilobars. Although potentially stable at lower pressure and low temperature, the activity of water is usually high enough under such conditions that it is replaced by hydrous aluminosilicates such as muscovite, pyrophyllite, or kaolinite. Kyanite is also known as disthene, rhaeticite and cyanite. At temperatures above 1100 °C kyanite decomposes into mullite and vitreous silica via the following reaction: 3(Al2O3·SiO2) → 3Al2O3·2SiO2 + SiO2. This transformation results in an expansion.[4] Uses[edit] Azurite. Mineralogy[edit] Azurite is one of the two basic copper(II) carbonate minerals, the other being bright green malachite. 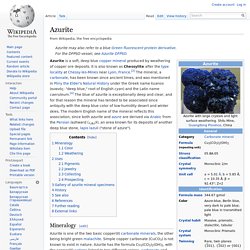 Simple copper carbonate (CuCO3) is not known to exist in nature. Azurite has the formula Cu3(CO3)2(OH)2, with the copper(II) cations linked to two different anions, carbonate and hydroxide. Small crystals of azurite can be produced by rapidly stirring a few drops of copper sulfate solution into a saturated solution of sodium carbonate and allowing the solution to stand overnight. Aventurine. Aventurine is used for a number of applications, including landscape stone, building stone, aquaria, monuments, and jewelry. 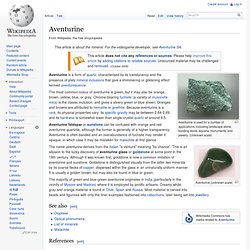 (Unknown scale) Aventurine (unknown scale) Aventurine feldspar or sunstone can be confused with orange and red aventurine quartzite, although the former is generally of a higher transparency. Aventurine is often banded and an overabundance of fuchsite may render it opaque, in which case it may be mistaken for malachite at first glance. The majority of green and blue-green aventurine originates in India (particularly in the vicinity of Mysore and Madras) where it is employed by prolific artisans. Gemstones of Pakistan. Various types of topaz found in Pakistan. 1st row: Pink topaz, Cognac coloured topaz, Light pink topaz crystal with black tourmaline on matrix. 2nd row: Rare purple topaz, Champagne coloured topaz on albite, Rare topaz and green hydroxylherderite matrix. 3rd row: Naturally cut topaz, Irradiated blue topaz, White topaz on matrix Extremely rare purple-lavender hued topaz on a matrix from Katlang in Mardan District, Khyber Pakhtunkhwa[1][2] Pakistan has large reserves of mineral ores and gemstones. 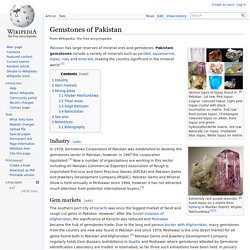 Aegirine. Aegirine is a member of the clinopyroxene group of inosilicates. 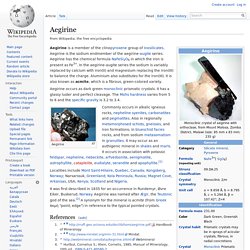 Aegirine is the sodium endmember of the aegirine-augite series. Aegirine has the chemical formula NaFeSi2O6 in which the iron is present as Fe3+. In the aegirine-augite series the sodium is variably replaced by calcium with iron(II) and magnesium replacing the iron(III) to balance the charge. Aluminium also substitutes for the iron(III). Agpaitic rock. An agpaitic rock is a peralkaline igneous rock, typically nepheline syenite or phonolite. 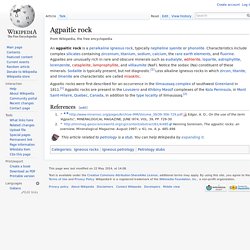 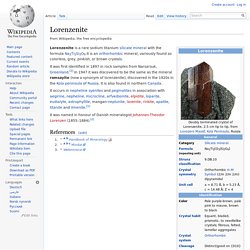 It was first identified in 1897 in rock samples from Narsarsuk, Greenland.[2] In 1947 it was discovered to be the same as the mineral ramsayite (now a synonym of lorenzenite), discovered in the 1920s in the Kola peninsula of Russia. It is also found in northern Canada. Siderophyllite. Siderophyllite is a rare member of the mica group of silicate minerals with formula KFe2+2Al(Al2Si2)O10(F,OH)2. 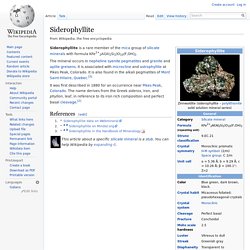 The mineral occurs in nepheline syenite pegmatites and granite and aplite greisens. It is associated with microcline and astrophyllite at Pikes Peak, Colorado. Zircophyllite. Zircophyllite is a complex mineral, formula (K,Na)3(Mn,Fe)7(Zr,Ti,Nb)2Si8O24(OH,F)7. 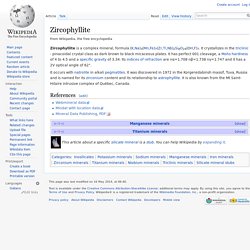 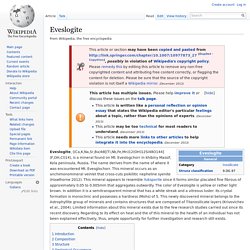 Eveslogchorr in khibiny Massif, Kola peninsula, Russia. The name derives from the name of where it was encountered Mt. Evesglochorr. This mineral occurs as an anchimonomineral veinlet that cross-cuts poikilitic nepheline syenite (Hawthorne 2012). This mineral appears to resemble Yuksporite since it forms similar placated fine fibrous of approximately 0.05 to 0.005mm that aggregates outwardly. Introduction[edit] Sérandite. Sérandite, also serandite,[3] is a mineral with formula Na(Mn2+,Ca)2Si3O8(OH). The mineral was discovered in Guinea in 1931 and named for J. M. Sérand. Astrophyllite. Astrophyllite is a very rare, brown to golden-yellow hydrous potassium iron titanium silicate mineral. Belonging to the astrophyllite group, astrophyllite may be classed either as an inosilicate, phyllosilicate, or an intermediate between the two.

It forms an isomorphous series with kupletskite, to which it is visually identical and often intimately associated. Astrophyllite is of interest primarily to scientists and collectors. Heavy, soft and fragile, astrophyllite typically forms as bladed, radiating stellate aggregates. It is this crystal habit that gives astrophyllite its name, from the Greek words astron meaning "star" and phyllon meaning "leaf".

As the crystals themselves possess perfect cleavage, they are typically left in situ, the entire aggregate often cut into slabs and polished. Aragonite. Occurrence[edit] Aragonite forms naturally in almost all mollusk shells, and as the calcareous endoskeleton of warm- and cold-water corals (Scleractinia). Several serpulids have aragonitic tubes. Apophyllite. The name apophyllite refers to a specific group of phyllosilicates, a class of minerals. Originally, the group name referred to a specific mineral, but was redefined in 1978 to stand for a class of minerals of similar chemical makeup that comprise a solid solution series, and includes the members apophyllite-(KF), apophyllite-(KOH), and apophyllite-(NaF).

The name apophyllite is derived from the Greek ἀπόΦυλλίςο apophylliso, meaning "it flakes off", a reference to this class's tendency to flake apart when heated, due to water loss. These minerals are typically found as secondary minerals in vesicles in basalt or other volcanic rocks. A recent change in the nomenclature system used for this group was approved by the International Mineralogical Association, removing the prefixes from the species names and using suffixes to designate the species.[2] Uses[edit] Apatite. The mineral was named apatite by the German geologist Abraham Gottlob Werner in 1786, although the specific mineral he had described was reclassified as fluorapatite in 1860 by the German mineralogist Karl Friedrich August Rammelsberg. Apatite is derived from the Greek απατείν (apatein), which means to deceive or to be misleading, as it was often mistaken for other minerals.[3] Apatite is one of a few minerals produced and used by biological micro-environmental systems.

Apatite is the defining mineral for 5 on the Mohs scale. Hydroxyapatite, also known as hydroxylapatite, is the major component of tooth enamel and bone mineral. A relatively rare form of apatite in which most of the OH groups are absent and containing many carbonate and acid phosphate substitutions is a large component of bone material.

Limu o Pele. Closeup picture of a Limu o Pele volcanic sheet glass fragment. Pele's tears. Pele’s tears is a geological term for small pieces of solidified lava drops formed when airborne particles of molten material fuse into tearlike drops of volcanic glass. Pele’s tears are jet black in color and are often found on one end of a strand of Pele's hair. Pele's tears is primarily a scientific term used by volcanologists. Introduction[edit] Lava fountains produce spectacular displays of volcanic activity with lava spurting out of the vent in a showering cascade of hot molten droplets. Many of the clots aggregate to form the familiar types of lava flows that we see in Hawaiian[1] and Strombolian eruptions.[2] However, there is also another interesting process that is occurring at the same time that is relatively unknown.

Pele's hair. Hyaloclastite. Palagonite. Palagonite layers at Moya Beach, Mayotte. Palagonite is an alteration product from the interaction of water with volcanic glass of chemical composition similar to basalt. Palagonite can also result from the interaction between water and basalt melt. The water flashes to steam on contact with the hot lava and the small fragments of lava react with the steam to form the light colored palagonite tuff cones common in areas of basaltic eruptions in contact with water. An example is found in the pyroclastic cones of the Galapagos Islands. Charles Darwin recognized the origin of these cones during his visit to the islands. Sideromelane. Tachylite. Basaltic glass in thin section, plane light top; cross-polarized light below Geographic occurrences[edit] Pumice. Volcanic glass. A sand grain of volcanic glass under the petrographic microscope. Apache tears. The apache tears originate from obsidian lava flows or lava domes. If water is present during cooling of the obsidian lava, the obsidian may hydrate (i.e., water enters the obsidian glass converting it to perlite).

Curved, onion-like fractures may form. If the central core does not get hydrated, that fresh obsidian core ends up being the apache tear. An Apache tear The name "Apache tear" comes from a legend of the Apache tribe: about 75 Apaches and the US Cavalry fought on a mountain overlooking what is now Superior, Arizona in the 1870s. American singer songwriter Johnny Cash wrote a song entitled "Apache Tears" for his 1964 album Bitter Tears: Ballads of the American Indian.