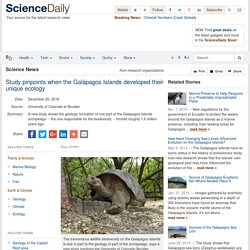 But why this is, and when it all began, remains something of an open question. Now scientists may have at least one more piece of the puzzle. According to a new study out today in Earth and Planetary Science Letters, the geologic formation of one particular part of the archipelago -- the part responsible for the huge biodiversity -- formed, approximately 1.6 million years ago. The lead author of the study is CIRES Fellow Kris Karnauskas, who you might say has a thing for these islands. He's studied them extensively, authoring six peer-reviewed scientific papers with "Galápagos" in the title.

"I asked around and couldn't get a straightforward answer," says Karnauskas, who's also an Assistant Professor in the Department of Atmospheric and Oceanic Sciences at the University of Colorado Boulder. Earth’s mantle is cooling faster than expected. SAN FRANCISCO — Earth’s innards are cooling off surprisingly fast. 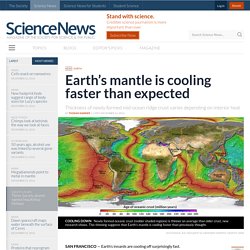 The thickness of new volcanic crust forming on the seafloor has gotten thinner over the last 170 million years. That suggests that the underlying mantle is cooling about twice as fast as previously thought, researchers reported December 13 at the American Geophysical Union’s fall meeting. The rapid mantle cooling offers fresh insight into how plate tectonics regulates Earth’s internal temperature, said study coauthor Harm Van Avendonk, a geophysicist at the University of Texas at Austin. “We’re seeing this kind of thin oceanic crust on the seafloor that may not have existed several hundred million years ago,” he said.

Scientists reconstruct formation of the southern Appalachians. Around 300 million years ago, the landmass that is now North America collided with Gondwana, a supercontinent comprised of present-day Africa and South America. 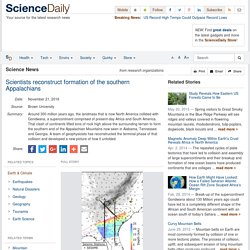 That clash of continents lifted tons of rock high above the surrounding terrain to form the southern end of the Appalachian Mountains now seen in Alabama, Tennessee and Georgia. A team of geophysicists has reconstructed the terminal phase of that collision and developed a new picture of how it unfolded. The study, led by Brown University researchers, used seismic monitoring stations to create a sonogram-like image of the crust beneath the southern U.S., near of the southern base of the Appalachians. The research shows that Gondwana crust was thrust atop North America when the two continents collided, sliding northward as much as 300 kilometers before the two continents separated and drifted apart about 200 million years ago. Wind Power: Creating a Wind Generator NGSS.

Investigation 1: Where does my electricity come from? 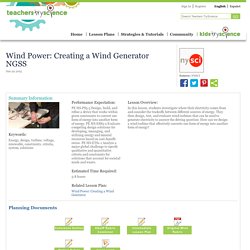 Teacher Preparation Prior to Investigation 1, be sure to research the sources your state or city utilizes for energy production. You can use the U.S. Energy Information Administration or other government websites to find this information. This will help you guide students as they research energy production during the investigation. Materials Energy readings Computers or tablets for Internet research Instructional Sequence Begin by asking students to do a quick write on the following prompt: “Where does your electricity come from?” For students who might struggle with writing, you can ask the class to create an annotated drawing instead of a full paragraph.

Next, ask students to think about everything they did from the time they woke up in the morning to the time they made it to class. For students who may not have access to electricity at home, you can focus their attention on electricity use in the classroom only. Sample Readings. Earth and Space Science - SDUHSD Common Core Resources. How Was the Earth Formed? How Was the Earth Formed? 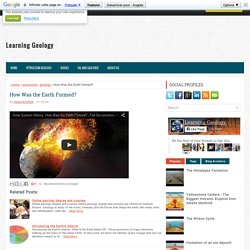 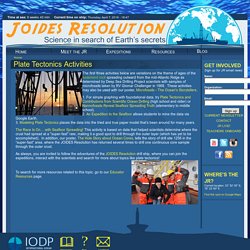 These activities may also be used with our poster, Microfossils - The Ocean's Storytellers. 1. The Race Is On… with Seafloor Spreading! As always, you are invited to follow the adventures of the JOIDES Resolution drill ship, where you can join the expeditions, interact with the scientists and search for more about topics like plate tectonics! To search for more resources related to this topic, go to our Educator Resources page. The%20Rumble Seismic. Strain%20Some%20Pasta Seismic. ESV-19-COMP-mapping_ocean_floor. A Model of Three Faults.