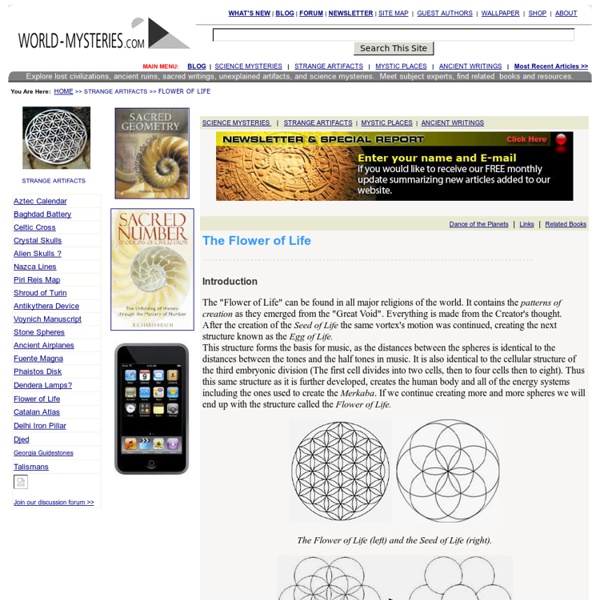 Sacred Geometry - Flower of Life By Andrew Monkman I believe the complete ancient flower of life is an inter-dimensional tool, a portal, a stargate, a window into what some call the inter space plains. The original flower of life (found on several pillars within "the Osireion" at abydos in Egypt) is incomplete, because it is only the first layer of three (pic1+2). 1. Flower of Life carved on a temple wall The Temple of Osiris at Abydos, Egypt. 2. The complete flower has the other two layers added, making it three dimensional (pic3). 3. What appears is a reptilian entity. Flower of Life - Beijing, China The second being is the Chinese dragon ( the fu dog). You may know that the complete flower contains the kabbalah`s tree of life, the fruit, the egg and the seed of life (pic. 4 & 5). 4. 5. The complete flower also contains the three dimensional metatron cube (pic6), which holds all the Platonic solids (pic7). 6. 7. 8. 9. 10. I was born and bred and now live back in Kirkwall. 12. 13. 14. 15.

Body Language Throughout history it has been an advantage if an individual can read body language. Body language helps in everyday life from closing a business deal or trusting someone with your life, to recognising when someone is upset. Body language is the art of making an educated guess at a person’s feelings or intentions based on their posture, movement and positioning. To understand a person’s body language you need to take into account more than one aspect of their body language.

Exploring the UVG Grid with Google Earth Basic Instructions for Exploring the UVG Grid with Google Earth Bethe Hagens Nazca The basic Google Earth program is available for PC and Mac—free!—at Beyond Pink and Blue: A Look at Gender Colors It goes beyond culture. There is science behind the gender-relationships when it comes to colors. A study by John Hallock compares the color preferences among various demographics and takes into account information collected from 22 countries.

Hydroponics NASA researcher checking hydroponic onions with Bibb lettuce to his left and radishes to the right Hydroponics is a subset of hydroculture, the method of growing plants without soil, using mineral nutrient solutions in a water solvent.[1] Terrestrial plants may be grown with only their roots exposed to the mineral solution, or the roots may be supported by an inert medium, such as perlite or gravel. The nutrients in hydroponics can be from fish waste, duck manure, or normal nutrients.

Cosmos, Moby’s Song ‘We Are All Made of Stars’, Universe & Solar System The theory that everyone and everything on Earth contains minuscule star particles dates back further than Moby's popular 2002 song "We Are All Made of Stars." In the early 1980s, astronomer Carl Sagan hosted and narrated a 13-part television series called "Cosmos" that aired on PBS. On the show, Sagan thoroughly explained many science-related topics, including Earth's history, evolution, the origin of life and the solar system. "We are a way for the universe to know itself. Guide to flirting Why do we flirt? Flirting is much more than just a bit of fun: it is a universal and essential aspect of human interaction. Anthropological research shows that flirting is to be found, in some form, in all cultures and societies around the world.

Make Cool Stuff: Concealing Your Secret Lair by Mindy Holahan on March 7, 2011 To the Batcave! Admit it. You’re prepared should a radioactive accident turn you into a superhero. You have your super name picked out, practiced the intimidating stance that will bring villains to their knees, and you’ve even considered how to combat your primary weakness. Where to go next? Space Zen: Will Humans' Brains Change During Travel in Outer Space? -A Galaxy Insight In February, 1971, Apollo 14 astronaut Edgar Mitchell experienced the little understood phenomenon sometimes called the “Overview Effect”. He describes being completely engulfed by a profound sense of universal connectedness. Without warning, he says, a feeing of bliss, timelessness, and connectedness began to overwhelm him. He describes becoming instantly and profoundly aware that each of his constituent atoms were connected to the fragile planet he saw in the window and to every other atom in the Universe.

Oath Keepers » About OathKeepers About Oath Keepers Oath Keepers is a non-partisan association of current and formerly serving military, police, and first responders who pledge to fulfill the oath all military and police take to “defend the Constitution against all enemies, foreign and domestic.” That oath, mandated by Article VI of the Constitution itself, is to the Constitution, not to the politicians, and Oath Keepers declare that they will not obey unconstitutional orders, such as orders to disarm the American people, to conduct warrantless searches, or to detain Americans as “enemy combatants” in violation of their ancient right to jury trial. See the Oath Keepers Declaration of Orders We Will Not Obey for details. Oath Keepers reaches out to both current serving and veterans to remind them of their oaths, to teach them more about the Constitution they swore to defend, and to inspire them to defend it. See below for details on how we do that.

Nibiru's Orbit, The Red Star of Bethlehem, Sonic Levitation, Ancient Wisdom by David Millo www.world-mysteries.com Articles by David Millo All Articles Copyright 2002 by David Millo, MysteriesUnsealed.com Copyright 2002 World-Mysteries.com The Red Star of Bethlehem by David Millo "We have seen his star appear in the first rays of dawn... and lo, the star which they had seen in the east, went on before them, until it came and stood over where the child was." Top 10 Strange Phenomena of the Mind Humans The mind is a wonderful thing – there is so much about it which remains a mystery to this day. Science is able to describe strange phenomena, but can not account for their origins. While most of us are familiar with one or two on this list, many others are mostly unknown outside of the psychological realm. This is a list of the top ten strange mental phenomena. We have all some experience of a feeling, that comes over us occasionally, of what we are saying and doing having been said and done before, in a remote time – of our having been surrounded, dim ages ago, by the same faces, objects, and circumstances – of our knowing perfectly what will be said next, as if we suddenly remember it!