From Wolfram MathWorld. An incircle is an inscribed circle of a polygon, i.e., a circle that is tangent to each of the polygon's sides. 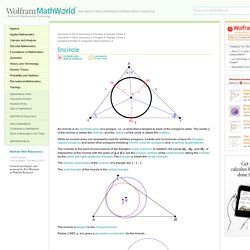 The center of the incircle is called the incenter, and the radius of the circle is called the inradius. While an incircle does not necessarily exist for arbitrary polygons, it exists and is moreover unique for triangles, regular polygons, and some other polygons including rhombi, bicentric polygons, and tangential quadrilaterals. Incircle and excircles of a triangle - Wikipedia. A triangle (black) with incircle (blue), incenter (I), excircles (orange), excenters (JA,JB,JC), internal angle bisectors (red) and external angle bisectors (green). 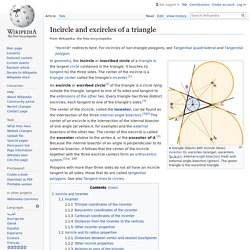 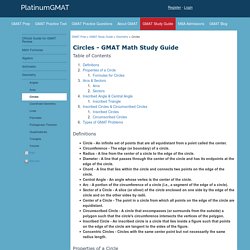 The length of the equidistant points from the center is the radius, r. Brilliant Math & Science Wiki. Introduction How would you draw a circle inside a triangle, touching all three sides? 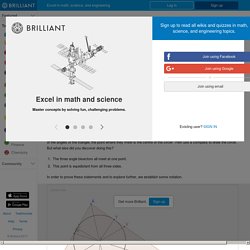 It is actually not too complex. Simply bisect each of the angles of the triangle; the point where they meet is the centre of the circle! Then use a compass to draw the circle. But what else did you discover doing this? Brilliant Math & Science Wiki. In the above diagram, circle O of radius 3 is inscribed in △ABC. 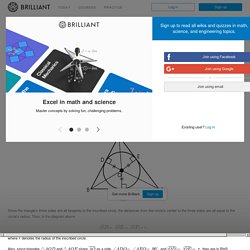 If the perimeter of △ABC is 30, what is the area of △ABC? The area of a circumscribed triangle is given by the formula 21​×r×(the triangle’s perimeter), where r is the inscribed circle's radius. Brilliant Math & Science Wiki. Other centers of the triangle include the The orthocenter is the point where the three altitudes of a triangle meet. 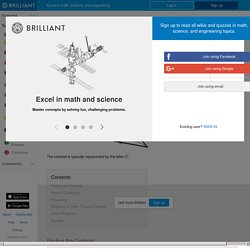 The altitude is a line segment drawn from one vertex to the opposite side, and it is perpendicular to the opposite side. The incenter is the center of the triangle's incircle. The incircle is the circle subscribed inside the triangle and it is tangent ot each of its sides. Brilliant Math & Science Wiki. In this section, we will try problems that can be greatly simplified by applying properties of the circumcenter, even though the problems themselves don't directly involve the circumcenter. 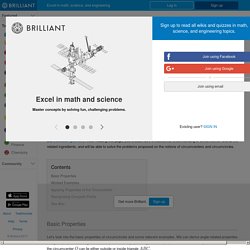 Since the circumcenter is a rich structure that interrelates angles and lengths, using it correctly in a problem (e.g. International Mathematical Olympiad, or IMO) can be very powerful. Brilliant Math & Science Wiki. If the altitudes of a triangle have lengths , then Triangle has area 15 and perimeter 20. 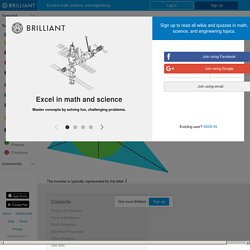 Furthermore, the product of the 3 side lengths is 255. If the three altitudes of the triangle have lengths , and , then the value of can be written as for relatively prime positive integers and . What is ? Brilliant Math & Science Wiki. The area of a triangle, given the coordinates of its vertices, is equal to the absolute value of (The sign is positive if the points are given in clockwise order, and negative if they are in counterclockwise order.) 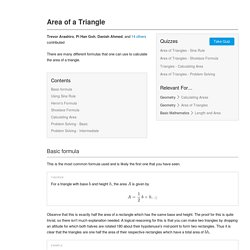 Upon expansion, we get If the triangle is in three dimensions, then the area becomes Triangle exists in the 2D Cartesian plane and has two vertices at points and . Point exists on the parabola such that the -coordinate of point satisfies . Find the maximum possible area of triangle . We begin by plugging in our givens: Substituting and expanding, we get Using , the maximum occurs at . Area of Triangles - Heron's Formula Practice Problems Online. Brilliant Math & Science Wiki. Find the area of the triangle below. 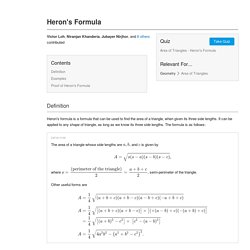 Let's check it: Calculating this becomes: And that is true. In the given figure, ABCD is a parallelogram and E, F, G and H are mid : GMAT Problem Solving (PS) Bunuel wrote: Attachment: SimilarTriangles2.jpg. How to Find the Area of Shaded Regions.