Pietà (Michelangelo) Detail of Mary The structure is pyramidal, and the vertex coincides with Mary's head. 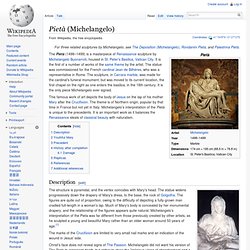 The statue widens progressively down the drapery of Mary's dress, to the base, the rock of Golgotha. The figures are quite out of proportion, owing to the difficulty of depicting a fully-grown man cradled full-length in a woman's lap. Much of Mary's body is concealed by her monumental drapery, and the relationship of the figures appears quite natural. Michelangelo's interpretation of the Pieta was far different from those previously created by other artists, as he sculpted a young and beautiful Mary rather than an older woman around 50 years of age.[1] Kimber scott&#039;s posterous - Art and a little bit of other stuff. Mostly art. Michael Keropian Bronze Sculpture. Art Deco Study Guide.

What is Art Deco? 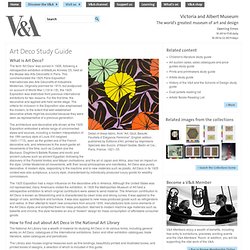 The term 'Art Deco' was coined in 1926, following a retrospective exhibition entitledLes Années '25, held at the Musée des Arts Décoratifs in Paris. This commemorated the 1925 Paris Exposition Internationale des Arts Décoratifs et Industriels Modernes. Originally planned for 1915, but postponed on account of World War I (1914–18), the 1925 Exposition was distinctive from previous international exhibitions for two reasons. For the first time, the decorative and applied arts held centre stage.

The criteria for inclusion in the Exposition also emphasised the modern, to the extent that well-established decorative artists might be excluded because they were seen as representative of a previous generation. The 1925 Exposition had a major influence on the decorative arts in America. How to find out about Art Deco in the National Art Library General books on Art Deco A list has been provided below of general books on Art Deco in its various media. International exhibitions. TITLES ARE FOR PEOPLE WITH IDEAS. JP MORRISON. Angelica Ström Photography. British Art, British Artists, Paintings and Limited Edition Prints. 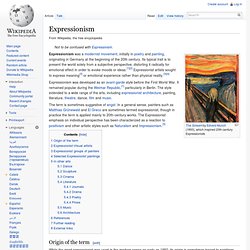 Its typical trait is to present the world solely from a subjective perspective, distorting it radically for emotional effect in order to evoke moods or ideas.[1][2] Expressionist artists sought to express meaning[3] or emotional experience rather than physical reality.[3][4] Origin of the term[edit] In 1905, a group of four German artists, led by Ernst Ludwig Kirchner, formed Die Brücke (the Bridge) in the city of Dresden. This was arguably the founding organization for the German Expressionist movement, though they did not use the word itself. A few years later, in 1911, a like-minded group of young artists formed Der Blaue Reiter (The Blue Rider) in Munich. "View of Toledo" by El Greco, 1595/1610 has been indicated to have a particularly striking resemblance to 20th-century expressionism. Portrait Sculptures. Stanford movement research group. Richard renaldi - photographs. Daily Campello Art News. Richard MacDonald Studio.

The Fine art of Bryce Cameron Liston. Photography Magazine - Digital Photo Magazine. Pierre-Auguste Renoir. Pierre-Auguste Renoir (US /rɛnˈwɑr/ or UK /ˈrɛnwɑr/; French: [pjɛʁ oɡyst ʁənwaʁ]; 25 February 1841 – 3 December 1919) was a French artist who was a leading painter in the development of the Impressionist style. 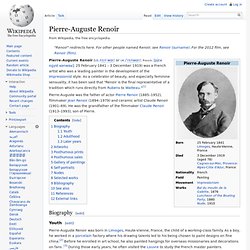 As a celebrator of beauty, and especially feminine sensuality, it has been said that "Renoir is the final representative of a tradition which runs directly from Rubens to Watteau. "[1] Pierre-Auguste was the father of actor Pierre Renoir (1885–1952), filmmaker Jean Renoir (1894–1979) and ceramic artist Claude Renoir (1901–69). He was the grandfather of the filmmaker Claude Renoir (1913–1993), son of Pierre. Biography[edit] Youth[edit] Pierre-Auguste Renoir was born in Limoges, Haute-Vienne, France, the child of a working-class family. In 1862, he began studying art under Charles Gleyre in Paris. Adulthood[edit] Renoir experienced his initial acclaim when six of his paintings were hung in the first Impressionist exhibition in 1874. Later years[edit] Pierre-Auguste Renoir, c. 1910. John William Waterhouse. John William Waterhouse (born between January and April 1849; died 10 February 1917) was an English painter known for working in the Pre-Raphaelite style. 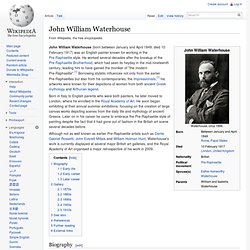 He worked several decades after the breakup of the Pre-Raphaelite Brotherhood, which had seen its heyday in the mid-nineteenth century, leading him to have gained the moniker of "the modern Pre-Raphaelite".[1] Borrowing stylistic influences not only from the earlier Pre-Raphaelites but also from his contemporaries, the Impressionists,[1] his artworks were known for their depictions of women from both ancient Greek mythology and Arthurian legend. Born in Italy to English parents who were both painters, he later moved to London, where he enrolled in the Royal Academy of Art. He soon began exhibiting at their annual summer exhibitions, focusing on the creation of large canvas works depicting scenes from the daily life and mythology of ancient Greece. Biography[edit] Early life[edit] Waterhouse working on Lamia, circa 1908-09.