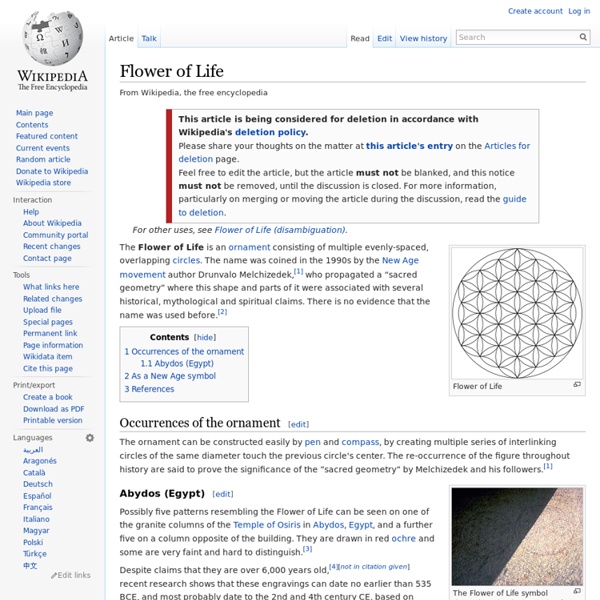 Occurrences of the ornament[edit] The Flower of Life symbol drawn in red ochre Temple of Osiris at Abydos, Egypt Abydos (Egypt)[edit] Possibly five patterns resembling the Flower of Life can be seen on one of the granite columns of the Temple of Osiris in Abydos, Egypt, and a further five on a column opposite of the building. They are drawn in red ochre and some are very faint and hard to distinguish.[3] As a New Age symbol[edit] The New York Times quoted a New Age artist as saying, "The Flower of Life has been found in sacred sites throughout the world. References[edit] ^ Jump up to: a b Melchizedek, Drunvalo.

The Sacred Geometry Of Music The Sacred Geometry Of Music by Andrew Lorimer Music uses the laws of vibration to manifest aurally what exists at the center of everything. Into our reality springs a non-visual harmonic law that is universal. The notes and intervals of music speak directly to the chakra centers and causes them to vibrate in harmony to the vibration of a string or vocal chords, speakers moving through the air, or the sound of someone’s lips making a farting noise through a metal tube. Music uses the laws of physics and mathematics to bring out an emotional response in the listener. The music of the Western world uses a mathematical system based on Twelve.

Parabola The parabola has many important applications, from a parabolic antenna or parabolic microphone to automobile headlight reflectors to the design of ballistic missiles. They are frequently used in physics, engineering, and many other areas. Strictly, the adjective parabolic should be applied only to things that are shaped as a parabola, which is a two-dimensional shape.

The Flower of Life The flower of life holds a secret through which one can discover the most important and sacred pattern in the universe. This is the source of all that exists; it’s called the Fruit of Life. It contains 13 informational systems. Geometry in Art & Architecture Unit 3 Pythagoras & Music of the Spheres There is geometry in the humming of the strings ... there is music in the spacing of the spheres. Pythagoras From Egypt we move across the Mediterranean Sea to the Greek island of Samos, the birthplace of Pythagoras, whose ideas dominate most of the material in this course. We'll introduce Pythagoras and his secret society of the Pythagoreans.

Pascal's Triangle and the Fibonacci Series Pascal’s Triangle, developed by the French Mathematician Blaise Pascal, is formed by starting with an apex of 1. Every number below in the triangle is the sum of the two numbers diagonally above it to the left and the right, with positions outside the triangle counting as zero. The numbers on diagonals of the triangle add to the Fibonacci series, as shown below. Pascal’s triangle has many unusual properties and a variety of uses: Horizontal rows add to powers of 2 (i.e., 1, 2, 4, 8, 16, etc.)The horizontal rows represent powers of 11 (1, 11, 121, 1331, etc.)Adding any two successive numbers in the diagonal 1-3-6-10-15-21-28… results in a perfect square (1, 4, 9, 16, etc.)It can be used to find combinations in probability problems (if, for instance, you pick any two of five items, the number of possible combinations is 10, found by looking in the second place of the fifth row. Be Sociable.

Underwater Pyramid Structures Found Near Western Cuba September 29, 2012 - Pyramids under the waters of Cuba were discovered by two scientists Paul Weinzweig and Pauline Zalitzki. They found the ruins of ancient buildings for about a mile below the sea and considered them to be Atlantis. Paulina found elsewhere in Cuba ancient descriptions and symbols that was identical to those on the waterfront structures below. The two scientists used submarines to found tremendous pyramid structures (that remainds giza in Egypt), built of stones weighing hundreds of tons. They found sphinxes, stones that arranged like Stonehenge, and a written language engraved on the stones. Why it was not discovered before?

Cardioid A cardioid generated by a rolling circle around another circle and tracing one point on the edge of it. A cardioid given as the envelope of circles whose centers lie on a given circle and which pass through a fixed point on the given circle. The name was coined by de Castillon in 1741[2] but had been the subject of study decades beforehand.[3] Named for its heart-like form, it is shaped more like the outline of the cross section of a round apple without the stalk. A cardioid microphone exhibits an acoustic pickup pattern that, when graphed in two dimensions, resembles a cardioid, (any 2d plane containing the 3d straight line of the microphone body.) Science and the Scriptures Chapter 11 Science and the Scriptures While scores of theological scholars have been studying the literal meaning of biblical phrases and the historical facts mentioned therein, leading to an endless stream of interpretations, scientists have studied the scriptures and discovered scientific hidden meaning within them. Along with our rapid scientific evolution, our understanding of ancient scriptures such as the Vedas and the Upanishads is growing. Now we’re not only rediscovering the scientific significance of Eastern spirituality but also that of the Bible!

Human Form From Sacred Geometry New Discoveries Linking The Great Pyramid to the Human Form Copyright 1997 - 2000 CHARLES R. About Sacred Geometry Introduction Sacred Geometry is the blueprint of Creation and the genesis of all form. It is an ancient science that explores and explains the energy patterns that create and unify all things and reveals the precise way that the energy of Creation organizes itself. On every scale, every natural pattern of growth or movement conforms inevitably to one or more geometric shapes. As you enter the world of Sacred Geometry you begin to see as never before the wonderfully patterned beauty of Creation. The molecules of our DNA, the cornea of our eye, snow flakes, pine cones, flower petals, diamond crystals, the branching of trees, a nautilus shell, the star we spin around, the galaxy we spiral within, the air we breathe, and all life forms as we know them emerge out of timeless geometric codes.

The revival of an ancient science At the other end of the scientific spectrum of contemporary science an ancient science is being restored. For ages it has been preserved carefully. It is more or less an art form and it is called ‘sacred geometry’. Why sacred, what is so sacred about geometry? In spiritual mystery-schools of the past it was taught that sacred geometry has been used by God to create the universe. About Sacred Geometry Introduction Sacred Geometry is the blueprint of Creation and the genesis of all form. It is an ancient science that explores and explains the energy patterns that create and unify all things and reveals the precise way that the energy of Creation organizes itself. On every scale, every natural pattern of growth or movement conforms inevitably to one or more geometric shapes.