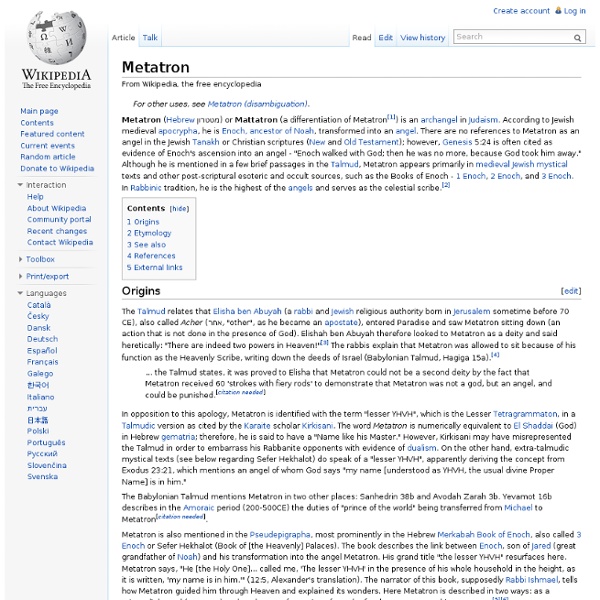 Origins[edit] The identification of Metatron with Enoch is not explicitly made in the Talmud although it does reference a Prince of the World who was young but now is old. However, some of the earliest kabbalists assumed the connection. There also seems to be two Metatrons, one spelled with six letters (מטטרון), and one spelled with seven (מיטטרון). The former may be the transformed Enoch, Prince of the Countenance within the divine palace; the latter, the Primordial Metatron, an emanation of the "Cause of Causes", specifically the tenth and last emanation, identified with the earthly Divine Presence.[6] Furthermore, the Merkabah text Re’ uyot Yehezkel identifies the Ancient of Days from Daniel as Metatron.[5] Talmud[edit] The Talmud states, it was proved to Elisha that Metatron could not be a second deity by the fact that Metatron received 60 "strokes with fiery rods" to demonstrate that Metatron was not a god, but an angel, and could be punished.[5] Etymology[edit] See also[edit] Related:  figurative art • Sequenze, frattali, geometrie sacre

About Sacred Geometry Introduction Sacred Geometry is the blueprint of Creation and the genesis of all form. It is an ancient science that explores and explains the energy patterns that create and unify all things and reveals the precise way that the energy of Creation organizes itself. On every scale, every natural pattern of growth or movement conforms inevitably to one or more geometric shapes. As you enter the world of Sacred Geometry you begin to see as never before the wonderfully patterned beauty of Creation. The molecules of our DNA, the cornea of our eye, snow flakes, pine cones, flower petals, diamond crystals, the branching of trees, a nautilus shell, the star we spin around, the galaxy we spiral within, the air we breathe, and all life forms as we know them emerge out of timeless geometric codes. Viewing and contemplating these codes allow us to gaze directly at the lines on the face of deep wisdom and offers up a glimpse into the inner workings of the Universal Mind and the Universe itself. 1.

Metatron with Eve's Grid I recently meditated on the subject of my writing. During this session I had a vision. I would like some clarification on this, if possible. I saw what appeared to be a rectangle with a triad on the top and bottom. It came in very slowly, then I realized it was more than two dimensional. I began to see sacred patterns within this symbol (five pointed star, Initiates Star, etc). Hello, There is a little information here that may pertain to your individual circumstances. Love..............r rayflowers Metatron Cube and Eve's Grid

The Math Behind the Beauty By M. Bourne Jessica Simpson What has mathematics got to do with beauty? Our attraction to another person's body increases if that body is symmetrical and in proportion. Scientists believe that we perceive proportional bodies to be more healthy. Leonardo da Vinci's "Vitruvian Man", showing the golden ratio in body dimensions Leonardo da Vinci's drawings of the human body emphasised its proportion. (foot to navel) : (navel to head) Similarly, buildings are more attractive if the proportions used follow the Golden Ratio. Golden Ratio The Golden Ratio (or "Golden Section") is based on Fibonacci Numbers, where every number in the sequence (after the second) is the sum of the previous 2 numbers: We will see (below) how the Fibonnaci Numbers lead to the Golden Ratio: Physical Beauty Why do many people feel that Jessica Simpson is beautiful? This mask of the human face is based on the Golden Ratio. Her beauty is mathematical! You can play with this concept in the following interactive. Choose mask:

"The Mind as the Software of the Brain" by Ned Block Ned BlockNew York University 1. Machine Intelligence 2. Intelligence and Intentionality 3. 4. Cognitive scientists often say that the mind is the software of the brain. 1. In this section, we will start with an influential attempt to define `intelligence', and then we will move to a consideration of how human intelligence is to be investigated on the machine model. 1.1 The Turing Test One approach to the mind has been to avoid its mysteries by simply defining the mental in terms of the behavioral. Behaviorists don't define the mental in terms of just plain behavior, since after all something can be intelligent even if it has never had the chance to exhibit its intelligence. An especially influential behaviorist definition of intelligence was put forward by A. Turing suggested that we replace the concept of intelligence with the concept of passing the Turing test. A second purpose might be utility for theoretical purposes. This type of program is easy to trip up if you know how it works.

The Home of Charles Gilchrist: Artist, Photographer, Teacher Fibonacci Numbers and The Golden Section in Art, Architecture and Music This section introduces you to some of the occurrences of the Fibonacci series and the Golden Ratio in architecture, art and music. Contents of this page The icon means there is a Things to do investigation at the end of the section. 1·61803 39887 49894 84820 45868 34365 63811 77203 09179 80576 ..More.. The Golden section in architecture The Parthenon and Greek Architecture The ancient Greeks knew of a rectangle whose sides are in the golden proportion (1 : 1.618 which is the same as 0.618 : 1). The Acropolis (see a plan diagram or Roy George's plan of the Parthenon with active spots to click on to view photographs), in the centre of Athens, is an outcrop of rock that dominates the ancient city. Links Modern Architecture The Eden Project's new Education Building The Eden Project in St. California Polytechnic Engineering Plaza As a guiding element, we selected the Fibonacci series spiral, or golden mean, as the representation of engineering knowledge. The United Nations Building in New York Music Art

ANCIENT EGYPT : The Ten Keys of Hermes Trismegistos I, King Pepi, am THOTH, the mightiest of the gods ... Pyramid Texts, § 1237. I, said he, am POIMANDRES, the Mind of the Sovereignty. Corpus Hermeticum (CH), Libellus I (Poimandres), Book 1.2 "Do You not know that You have become a God, and son of the One, even as I have ?" 1 The mental origin of the world and of man. 2 Corresponding harmonics. 3 Dynamics of alternation. 4 Bi-polarity and complementarity. 5 Cyclic repolarisation. 6 Cause and effect. 7 Gender. 8 The astrology of the Ogdoad. 9 The magic of the Ennead. 10 The alchemy of the Decad. "Content is Atum, father of the gods. With this great and might word, which issued from the mouth of THOTH for Osiris, the Treasurer of Life, Seal-bearer of the gods, Anubis, who claims hearts, claims Osiris King Pepi ... Hear O THOTH, in whom is the peace of the gods ... Not the Qabalah (Jewish or Christian), but the Ancient Egyptian Mystery Tradition (or Kemetism) is the backbone of the Western Tradition. Introduction ► the Hermetic Divine triad

Sacred Geometry, alternative, vibrational healing, transformational art, visionary art, mandala art Vibrations of the New World Experienced as Art All Things VibrateEvery thing in form is vibrating. How it vibrates stipulates much of its form. By isolating color as found in ColorCards and Mini ColorCards vibrations can be used to understand much about life. For example, depending on how it is used red can mean anger, frustration, blocked energy or it can become the energy needed to get a project started or the passion needed to proceed with life purpose. Combining Color and Sacred GeometryWhen the vibration of color is combined with sacred geometry a new, more complex vibration is created. Here's a video that shows you the combination of color, sacred geometry, and sound. How Geometry Changes our Experience of Color Try this: Close your eyes and think of a blotch of red with no particular boundaries around it. Now look at this art created by Lahrinda Eileen using red. This Mandala Art is called “Core Crucible.” Here is a sample from the deck.