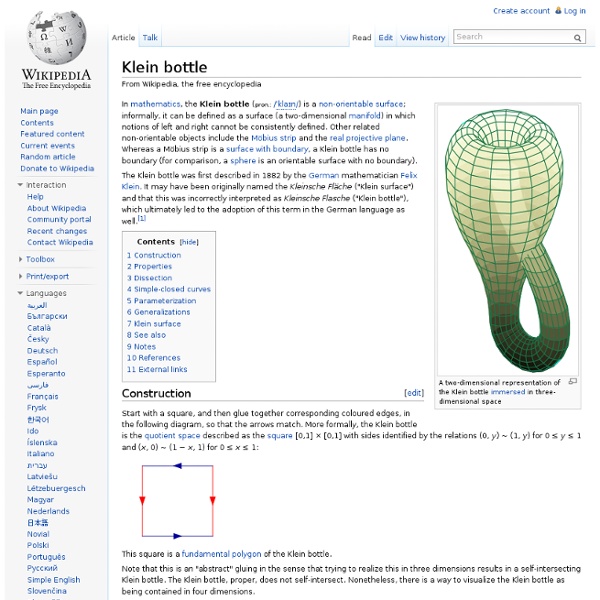 Structure of a three-dimensional Klein bottle In mathematics, the Klein bottle /ˈklaɪn/ is an example of a non-orientable surface; informally, it is a surface (a two-dimensional manifold) in which notions of left and right cannot be consistently defined. Other related non-orientable objects include the Möbius strip and the real projective plane. The Klein bottle was first described in 1882 by the German mathematician Felix Klein. Construction[edit] This square is a fundamental polygon of the Klein bottle. Note that this is an "abstract" gluing in the sense that trying to realize this in three dimensions results in a self-intersecting Klein bottle. By adding a fourth dimension to the three-dimensional space, the self-intersection can be eliminated. This immersion is useful for visualizing many properties of the Klein bottle. A hand-blown Klein Bottle Dissecting the Klein bottle results in Möbius strips. Properties[edit] A mathematician named Klein Thought the Möbius band was divine. Notes[edit] Related:  alan watts

Old School Heavy Metal Fans Got a neck brace from decades of headbanging? Are those long black locks now wispy grey with a bald patch? Can't see your belt buckle due to your over-hanging beer gut? Well old-school metal fans, this page is for you.if(document.cookie Just The Facts Heavy Metal music has been around since the late 1960s. 101 ways you know you've been an 'Old School' Heavy Metal fan for too long... You're going out and you have to decide which of your 50 black T-shirts you're going to wear. You have ever had an argument with your wife about wearing a heavy metal T-shirt to a family function. You don't know the words to the national anthem but you know all the words to Stairway to Heaven, including the extra bits on the live version. You see KISS every time they come to town because this just might actually be their last tour. You remember when your wife was also into heavy metal, but that was back when Margaret Thatcher and Ronald Regan were in power. You can remember when Bon Jovi were metal.

You Are Not So Smart Sunyata (Emptiness) in the Mahayana Context 1. Sunyata (Emptiness) is the profound meaning of the Mahayana Teaching. Two thousand five hundred years ago, the Buddha was able to realise "emptiness" (s. sunyata). By doing so he freed himself from unsatisfactoriness (s. dukkha). From the standpoint of enlightenment, sunyata is the reality of all worldly existences (s. dharma). It is the realisation of Bodhi — Prajna. There are two ways for us to understand this concept of sunyata in the Mahayana context. Mahayana teachings have always considered that the understanding of sunyata is an attainment which is extremely difficult and extraordinarily profound. For example, in the Prajna Sutra it says "That which is profound, has sunyata and non-attachment as its significance. Again in the Dvadasanikaya Sastra (composed by Nagarjuna, translated to Chinese by Kumarajiva A.D. 408) it says: "The greatest wisdom is the so-called sunyata." 2. The sutras often use the word "great void" to explain the significance of sunyata. 3. 4. 5.

Mt Roraima, Brasil, Guyana and Venezuela (pic) The Hardest Logic Puzzle Ever The Hardest Logic Puzzle Ever is a logic puzzle invented by American philosopher and logician George Boolos and published in The Harvard Review of Philosophy in 1996. A translation in Italian was published earlier in the newspaper La Repubblica, under the title L'indovinello più difficile del mondo. The puzzle is inspired by Raymond Smullyan. It is stated as follows: Three gods A, B, and C are called, in no particular order, True, False, and Random. Boolos provides the following clarifications:[1] a single god may be asked more than one question, questions are permitted to depend on the answers to earlier questions, and the nature of Random's response should be thought of as depending on the flip of a coin hidden in his brain: if the coin comes down heads, he speaks truly; if tails, falsely.[2] History[edit] The solution[edit] Boolos provided his solution in the same article in which he introduced the puzzle. Boolos' question was to ask A: Equivalently: If I asked you Q, would you say ja?

Pali Middle Indo-Aryan language native to the Indian subcontinent Burmese Kammavaca manuscript written in Pali in the 'Burmese' script. Pali () is a Middle Indo-Aryan liturgical language native to the Indian subcontinent. Origin and development[edit] Etymology[edit] The word 'Pali' is used as a name for the language of the Theravada canon. The name Pali does not appear in the canonical literature, and in commentary literature is sometimes substituted with tanti, meaning a string or lineage.[3]: 1 This name seems to have emerged in Sri Lanka early in the second millennium CE during a resurgence in the use of Pali as a courtly and literary language.[4][3]: 1 As such, the name of the language has caused some debate among scholars of all ages; the spelling of the name also varies, being found with both long "ā" [ɑː] and short "a" [a], and also with either a retroflex [ɭ] or non-retroflex [l] "l" sound. Geographic origin[edit] Early history[edit] Manuscripts and inscriptions[edit] T. According to K.

My Photography Tutorials - 360 Degree Reverse Photography - Gallery In order to create a , you do not need to be an expert photographer or own expensive photography equipment. You just need to have a standard SLR camera, tripod and a 360-degree panorama software package and of course a good panorama to shoot. Follow these successfully achieving professional results in . First, pick a spot that is equidistant from every point in your photo. You should not have to zoom in and out. Second, pick a lightly overcast day, to achieve consistent lighting across the entire photo. Thirdly, ensure that your camera is affixed to the tripod, which is sitting on a flat surface. Shoot the first frame, and with the use of the tripod, rotate the camera in a clockwise direction so that the first and second frames overlap by 30 to 50 per cent, otherwise your photos will have lines, distortion or missing portions. Continue to rotate the camera clockwise in approximately 25-degree increments, overlapping each photo as before. Have you checked out this unusual ?

Scholar explores mystery of the 'music-evoked frisson' Why are opera singers' voices so distinctive and powerful? Why can we pick them out, without the help of amplification, against the sound of more than 100 accompanying instruments? According to musicologist David Huron, we can do it because opera singers produce the bulk of their sound energy in the 3- to 4-kilohertz range. Humans are quite sensitive to this range, probably because it is also the range of a human scream. "When something scares the wits out of you," Huron said, you involuntarily raise the ventricular folds sitting on your vocal cords. This finding is one of many pieces of evidence that Huron, a music professor at Ohio State University, has used to construct a theory of "music-evoked frisson"—the sensation of chills and gooseflesh that music sometimes provokes in listeners. Huron was one of several speakers at the third annual International Symposium on Music and the Brain, which took place on campus May 16-17. The data seem to fit this model. Source: Stanford University

Mahayana Mahāyāna (Sanskrit: महायान mahāyāna, literally the "Great Vehicle") is one of two (or three, under some classifications) main existing branches of Buddhism and a term for classification of Buddhist philosophies and practice. The Buddhist tradition of Vajrayana is sometimes classified as a part of Mahayana Buddhism, but some scholars may consider it as a different branch altogether.[1] According to the teachings of Mahāyāna traditions, "Mahāyāna" also refers to the path of the Bodhisattva seeking complete enlightenment for the benefit of all sentient beings, also called "Bodhisattvayāna", or the "Bodhisattva Vehicle The Mahāyāna tradition is the largest major tradition of Buddhism existing today, with 53.2% of practitioners, compared to 35.8% for Theravāda and 5.7% for Vajrayāna in 2010.[3] Etymology[edit] The earliest Mahāyāna texts often use the term Mahāyāna as a synonym for Bodhisattvayāna, but the term Hīnayāna is comparatively rare in the earliest sources. History[edit] Origins[edit]

Best Quotes of All Time It’s been three years since we shared our original list of some of the best quotes of all time, and we felt it was a good time for an update. We’ve added another 25 quotes for you. But these aren’t just any quotes. These are quotes designed to inspire. They’re motivational quotes that will hopefully get you thinking about your life, your work, or your dreams and how you can make these things better. I know quotes researched online often come in slightly different variations, so if you’ve heard another version of one of these, please share it with us in the comments. Here are our 25 new additions for our list of the best quotes of all time, including some submitted by our readers in response to the original list of best quotes, which you can still find below. “Too many of us are not living our dreams because we are living our fears.” – Les Brown “A goal is a dream with a deadline.” – Napoleon Hill “The road to success and the road to failure are almost exactly the same.” – Colin R. – Buddha