The Buddha. Books - Science of Being and Art of Living by Maharishi Mahesh Yogi. A Conversation with Eckhart Tolle & Deepak Chopra. For the first time ever, Deepak Chopra and Eckhart Tolle come together to share their insight and wisdom, and discuss some of life's biggest questions with you. 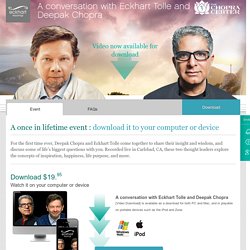 Recorded live in Carlsbad, CA, these two thought leaders explore the concepts of inspiration, happiness, life purpose, and more. Download $19.95 Watch it on your computer or device A conversation with Eckhart Tolle and Deepak Chopra [Video Download] is available as a download for both PC and Mac, and is playable on portable devices such as the iPod and Zune. Watch an example clip Also: Includes an appearance with Wayne Dyer WAYNE W. Global Country of World Peace.

Global Country of World Peace. The Global Country of World Peace (GCWP) was declared by Maharishi Mahesh Yogi , the founder of Transcendental Meditation , on Vijayadashami (Victory Day), October 7, 2000. [ 1 ] He described it as "a country without borders for peace-loving people everywhere". [ 2 ] [ 3 ] GCWP is structured as a kingdom, with Tony Nader as its current Maharaja or Sovereign Ruler. [ 4 ] It became incorporated in the state of Iowa , USA on October 15, 2002 as a nonprofit organization with Bevan Morris as its president. [ 5 ] The corporation has its headquarters in Maharishi Vedic City , Iowa . [ 5 ] [ 6 ] It has, or is building, capitals in the Netherlands, Iowa, Kansas, West Virginia, Manhattan, and India. 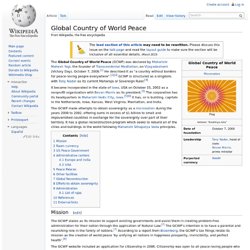 The GCWP made attempts to obtain sovereignty as a micronation during the years 2000 to 2002, offering sums in excess of $1 billion to small and impoverished countries in exchange for the sovereignty over part of their territory. Vedanta. Vedanta (/vɪˈdɑːntə/; Hindustani pronunciation: [ʋeːd̪aːn̪t̪], Devanagari: वेदान्त, Vedānta) is one of the six orthodox schools of Hindu philosophy. 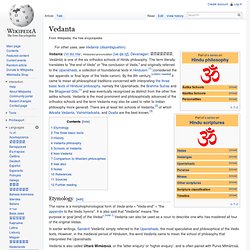 The term literally translates to "the end of Veda" or "the conclusion of Veda," and originally referred to the Upanishads, a collection of foundational texts in Hinduism (considered the last appendix or final layer of the Vedic canon). By the 8th century,[citation needed] it came to mean all philosophical traditions concerned with interpreting the three basic texts of Hinduist philosophy, namely the Upanishads, the Brahma Sutras and the Bhagavad Gita, and was eventually recognized as distinct from the other five astika schools.

Vedanta is the most prominent and philosophically advanced of the orthodox schools and the term Vedanta may also be used to refer to Indian philosophy more generall. Maharishi Mahesh Yogi. Maharishi Mahesh Yogi (12 January 1918[1] – 5 February 2008) was born Mahesh Prasad Varma and obtained the honorific Maharishi (meaning "Great Seer")[2][3] and Yogi as an adult.[4][5] He developed the Transcendental Meditation technique and was the leader and guru of a worldwide organization that has been characterized in multiple ways including as a new religious movement and as non-religious.[6][7][8] Maharishi Mahesh Yogi became a disciple and assistant of Swami Brahmananda Saraswati, the Shankaracharya (spiritual leader) of Jyotirmath in the Indian Himalayas. 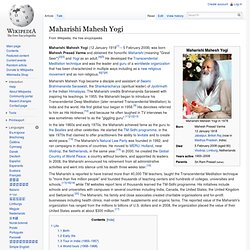 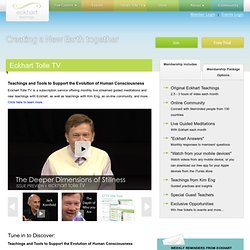 Click here to learn more. Tune in to Discover: Teachings and Tools to Support the Evolution of Human Consciousness Simple practices for inner peace How to bring presence into everyday life Wisdom to transform your relationships How to find your purpose in life How to balance "doing" and "being" Insights for working with ego This week's present moment reminder from Eckhart “When you are fully present with everyone you meet, you relinquish the conceptual identity you made for them — your interpretation of who they are and what they did in the past — and are able to interact without the egoic movements of desire and fear. Browse: Ram Dass. Youth and education[edit] Richard Alpert was born to a Jewish family in Newton, Massachusetts. 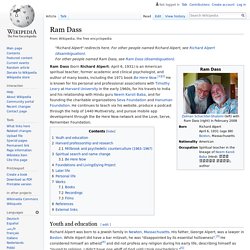 His father, George Alpert, was a lawyer in Boston. While Alpert did have a bar mitzvah, he was "disappointed by its essential hollowness".[3] He considered himself an atheist[4] and did not profess any religion during his early life, describing himself as "inured to religion. I didn’t have one whiff of God until I took psychedelics. Harvard professorship and research[edit] McClelland moved to Cambridge to teach at Harvard University, and helped Alpert accept a tenure-track position there in 1958 as an assistant clinical psychology professor.[5][7][8] Alpert worked with the Social Relations Department, the Psychology Department, the Graduate School of Education, and the Health Service, where he was a therapist.