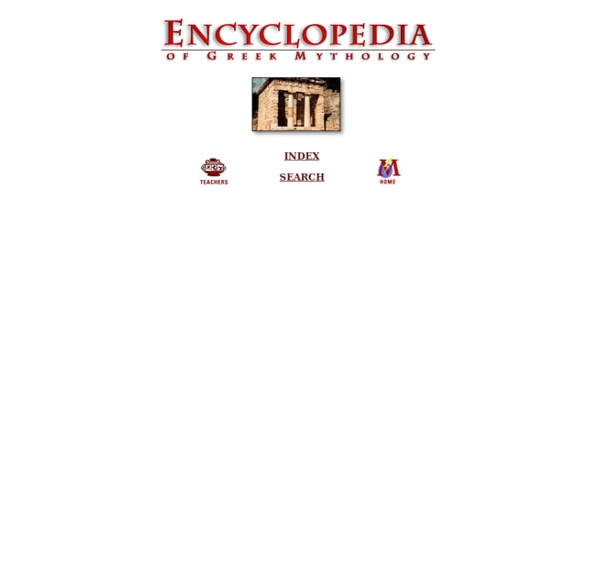 Perseus Digital Library Jewish angelic hierarchy Angels in Judaism (angel: Hebrew: מַלְאָךְ‎ mal’āḵ, plural mal’āḵīm) appear throughout the Hebrew Bible, Talmud, Rabbinic literature, and traditional Jewish liturgy. They are categorized in different hierarchies. Maimonides[edit] Maimonides, in his Mishneh Torah or Yad ha-Chazakah: Yesodei ha-Torah, counts ten ranks of angels in the Jewish angelic hierarchy, beginning from the highest: Kabbalah[edit] According to the Golden Dawn's interpretation of the Kabbalah, there are ten archangels, each commanding one of the choirs of angels and corresponding to one of the Sephirot. See also[edit] Hermetic Order of the Golden Dawn References[edit] External links[edit]

Ancient Greece - History, mythology, art, war, culture, society, and architecture. Greek Mythology Gods Olympians The Olympians are a group of 12 gods who ruled after the overthow of the Titans. All the Olympians are related in some way. They are named after their dwelling place Mount Olympus. Zeus Zeus overthew his Father Cronus. He then drew lots with his brothers Poseidon and Hades. Poseidon Poseidon is the brother of Zeus. At one point he desired Demeter. His weapon is a trident, which can shake the earth, and shatter any object. Hades Hades is the brother of Zeus. He is also the god of wealth, due to the precious metals mined from the earth. Hestia Hestia is Zeus sister. Hera Hera is Zeus wife and sister. Hera's marriage was founded in strife with Zeus and continued in strife. Once when Zeus was being partcularly overbearing to the other gods, Hera convinced them to join in a revolt. Most stories concerning Hera have to do with her jealous revenge for Zeus's infidelities. Ares Ares is the son of Zeus and Hera. Athena Athena is the daughter of Zeus. Apollo Apollo is the son of Zeus and Leto. Aphrodite

Ancient Days :: Who Were the Sons of God in Genesis 6? :: by David Livingston In Genesis 6:1-8 we read about some persons who may be a pre-Flood link between the Bible and the cultures of the ancient Near East. They are the "sons of the gods." The biblical reference to them should have some relationship with historical fact. If so, we should be able to lift these early chapters of Genesis out of what may be to some a foggy mysticism, and make connections with extra-biblical historical accounts. Suggested Meanings for the "sons of god" Who actually were the "sons of god?" Another interpretation is that they were the sons of Seth, the godly line. The third possibility is that of rabbinical Jewish interpretation. Perhaps a combination of the first and third is the best explanation. A New Interpretation A new interpretation has been suggested by Meredith Kline (in The Westminster Theological Journal, May 1962). Thus, the king is divine, he is god, and manifested himself as such especially on the New Year Festival. Divine Kingship What is it? How Divine Kingship Works 1.

Odyssey Though, Penelope was comfort with the news of the beggar, she dismissed such hope. The next day in the banquet hall, Penelope had decided to take one of the suitors as her husband, if that suitor could string Odysseus' bow and shoot an arrow through rings of twelve axes in a row. According to Homer, he tells that Iphitus had given the bow to Odysseus, when the hero was a young man. The bow had belonged to Iphitus' father, Eurytus, the king of Oechalia. Eurytus had been killed by Apollo. But according to the story of Heracles, Heracles had killed Iphitus after the twelve labours, but Homer says that Zeus had killed Iphitus. Telemachus saw the advantage of taking his revenge upon the suitors, said that he would see if he was strong enough to string his father's bow. While the suitors were unsuccessfully trying to string the bow, Odysseus revealed himself to two faithful servants, Eumaeus the swineherd and Philoetius the cowman. Two men threw themselves on the ground before Odysseus' feet.