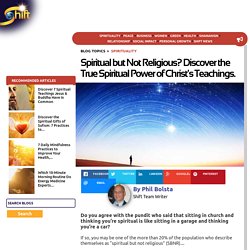 If so, you may be one of the more than 20% of the population who describe themselves as “spiritual but not religious” (SBNR).... So what’s the difference between many organized religions and spirituality anyway? Here are 5 key distinctions: Many organized religions represent God as an external entity. Spirituality portrays God as an integral aspect of our humanity. And as mystic scholar Andrew Harvey passionately illuminates in the audio clip I’ll be sharing with you below, Jesus himself was spiritual but not religious.

However, over the centuries, theologians and church leaders have edited, misinterpreted and distorted Jesus’ original teachings. It’s not surprising then that many former churchgoers eventually grew disillusioned with the Jesus presented in organized religion, and “threw out the baby with the bathwater” when they stopped attending.

Techniques. Egyptian Judeo Christian Muslim Religion. Meditation. Philosophy. Freemasons, Rosicrucians and Related. 35 Must-Read Spiritual Books You’ve Never Heard Of. Author Amateo Ra: You might have had an experience many of us share: We get an idea, a thought or even a dream with a theme that truly inspires us, stretches our minds or opens us up to a greater understanding ourselves and our lives. 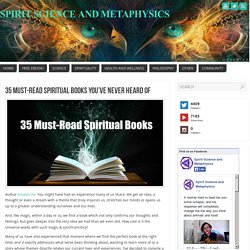 And, like magic, within a day or so, we find a book which not only confirms our thoughts and feelings, but goes deeper into the very idea we had than we even did. How cool is it the Universe works with such magic & synchronciticy? Many of us have also experienced that moment where we find the perfect book at the right time, and it exactly addresses what we’ve been thinking about, wanting to learn more of or a story whose themes directly relates our current lives and experiences. I’ve decided to compile a list of 35-very special books which have fit this description for thousands if not millions of people.

These are primarily lesser-known books, although there are a few you might identify or think are very popular. 1) The 5th Sacred Thing by Starhawk. Is Consciousness A Product Of The Brain Or A Receiver Of It? “I regard consciousness as fundamental. 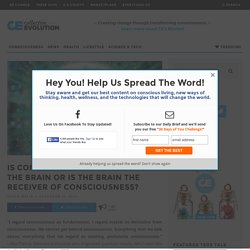 I regard matter as derivative from consciousness. We cannot get behind consciousness. How to Develop the Four Primary Skills of All Meditation. Paul Cavel, ContributorWaking Times Emancipation or freedom from slavery and bondage is ultimately what the human spirit craves. 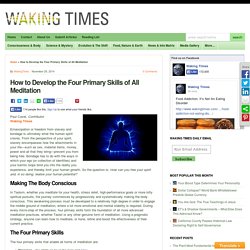 From the perspective of your spirit, slavery encompasses how the attachments in your life—such as sex, material items, money, power and all that they bring—prevent you from being free. Bondage has to do with the ways in which your ego (or collection of identities) and your karmic loops bind you into the reality you experience, and thereby limit your human growth.

So the question is: How can you free your spirit and, in so doing, realise your human potential? Making The Body Conscious. Sound Meditation for Escalation of Chaotic Nodes and the Dismantling of 3-D Reality. Tom Kenyon A Hathor Planetary Message Through Tom Kenyon Due to time-acceleration and cosmic forces far beyond your control you are in the midst of a crescendo of interlocking Chaotic Nodes. 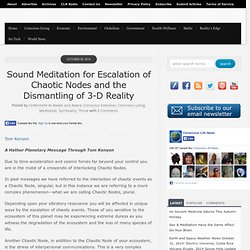 In past messages we have referred to the interaction of chaotic events as a Chaotic Node, singular, but in this instance we are referring to a more complex phenomenon—what we are calling Chaotic Nodes, plural. Depending upon your vibratory resonance you will be affected in unique ways by the escalation of chaotic events. The power of charisma—perceived charisma inhibits the frontal executive network of believers in intercessory prayer. + Author Affiliations Correspondence should be addressed to Uffe Schjoedt. 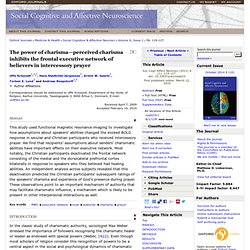 Department of the Study of Religion, Aarhus University, Taasingegade 3, 8000 Århus C, Denmark, E-mail: us@teo.au.dk Received April 7, 2009. Accepted February 16, 2010. Abstract This study used functional magnetic resonance imaging to investigate how assumptions about speakers’ abilities changed the evoked BOLD response in secular and Christian participants who received intercessory prayer. In the classic study of charismatic authority, sociologist Max Weber stressed the importance of followers recognising the charismatic healer or leader as endowed with special powers (Weber, 1922). It is a general finding that attentional processing and executive function recruit the same frontal regions and therefore compete for resources in critical situations (Engle et al., 1995; Richeson et al., 2003; Fuentes, 2004). We hypothesize that a mechanism similar to that of hypnosis may facilitate charismatic influence. 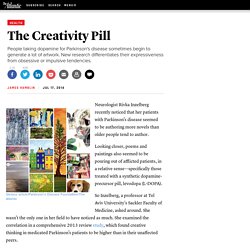 New research differentiates their expressiveness from obsessive or impulsive tendencies. Please consider disabling it for our site, or supporting our work in one of these ways Subscribe Now > Neurologist Rivka Inzelberg recently noticed that her patients with Parkinson’s disease seemed to be authoring more novels than older people tend to author.