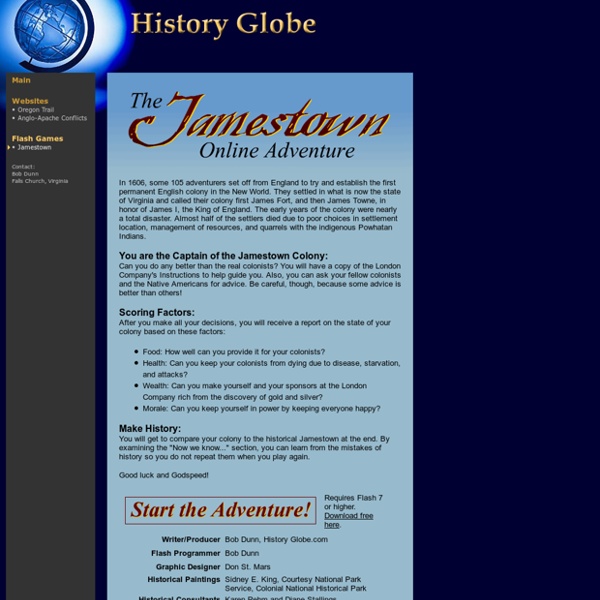 In 1606, some 105 adventurers set off from England to try and establish the first permanent English colony in the New World. They settled in what is now the state of Virginia and called their colony first James Fort, and then James Towne, in honor of James I, the King of England. The early years of the colony were nearly a total disaster. Almost half of the settlers died due to poor choices in settlement location, management of resources, and quarrels with the indigenous Powhatan Indians. You are the Captain of the Jamestown Colony: Can you do any better than the real colonists? You will have a copy of the London Company's Instructions to help guide you. Scoring Factors: After you make all your decisions, you will receive a report on the state of your colony based on these factors: Food: How well can you provide it for your colonists? Make History: You will get to compare your colony to the historical Jamestown at the end. Good luck and Godspeed!

13 Colonies Trades and Jobs Cooper Coopers were tradesman who made casks, buckets, barrels, and containers for flour, gunpowder, tobacco, shipping, wine, milk, and other liquids. One kind of container, the hogshead, was used to ship huge quantities of tobacco from the colonies to England. Written in Bone - The Secret in the Cellar: A Written in Bone Forensic Mystery from Colonial America The Secret in the Cellar, is a Webcomic based on an authentic forensic case of a recently discovered 17th Century body. Using graphics, photos, and online activities, the Webcomic unravels a mystery of historical, and scientific importance. Online sleuths can analyze artifacts and examine the skeleton for the tell-tale forensic clues that bring the deceased to life and establish the cause of death. Launch The Secret in the Cellar Webcomic.

Pilgrim Hall Museum - About the Pilgrims Sargent’s “Landing of the Pilgrims" The Pilgrims have become larger than life figures in American history, their story an enduring narrative of America’s founding. At Pilgrim Hall Museum, we share monumental paintings depicting key moments in their early history which have become iconic moments in America’s history. Many of these paintings, as well as literary depictions of the Pilgrims, tell us more about the times in which they were created than they do about the Pilgrims themselves. We also share the Pilgrims’ own possessions, including objects that came over on the Mayflower, to tell the story of the realities of life for those first settlers and their native Wampanoag neighbors.

The Thirteen Colonies The 13 Colonies - good information about each state 50 States - current information, flags, some history Daily Life in the Colonies (Interactive) A Colonial Family and Community (Interactive) Food in Colonial Times Colonial Clothing (Interactive) 13 Colonies Map: 13 colonies names matching map game Select and drop the colony name on the dot Social Studies 13 Colonies Timeline13 Colonies Facts To link to this page, copy the following code to your site: <a href=" Colonies </a> Virtual Tour - Statue Of Liberty National Monument Want to know what's going on inside the Statue of Liberty's head? The eTour will take you around the island and up to the crown. NPS Photo

National Portrait Gallery Pocahontas c. 1595–1617 | Born near present-day Richmond, Virginia (left image) Unidentified artist, after Simon van de Passe | Oil on canvas, after 1616 | Transfer from the National Gallery of Art; gift of the A. W. Mellon Educational and Charitable Trust, 1942 (right image) Simon van de Passe, 1595–1647 | Engraving on paper, 1616 Pocahontas, the Indian princess who allegedly saved the life of English colonist John Smith, survives and flourishes as an example of an early American heroine. While Smith certainly embellished the story of his rescue, the importance of Pocahontas to relations between colonists and Native Americans is undisputed. Following her conversion to Christianity and marriage to Englishman John Rolfe, Pocahontas journeyed to England with her family to demonstrate the ability of new settlers and native tribes to coexist in the Virginia colony.

New England Colonies - The 13 Colonies for Kids The New England colonies were composed of the colonies of New Hampshire, Rhode Island, Connecticut, and Massachusetts. In the New England colonies, land was given to a colony by the crown (the king or queen of England.) In these early days of settlement, a colony was not a state. A colony was a business. Each colony was in the business of sending riches back to England in exchange for money, tools, and supplies they needed in their colony. Each colony had a central government. Learn: For Students: WWII History: Take a Closer Look at Primary Sources Exploring Primary Sources with the National WWII Museum There are a lot of ways to learn history: reading books about a certain time and place, watching videos about a past event, traveling to a different part of the world. When you visit a museum—or in this case a museum’s website—you come in contact with actual pieces of history. Those pieces of history are called Primary Sources. They come in the form of artifacts, archives, and oral histories. When you explore primary sources from WWII, you get to see what people saw 70 years ago at a very interesting time in world history.