On the Trail of Captain John Smith: A Jamestown Adventure 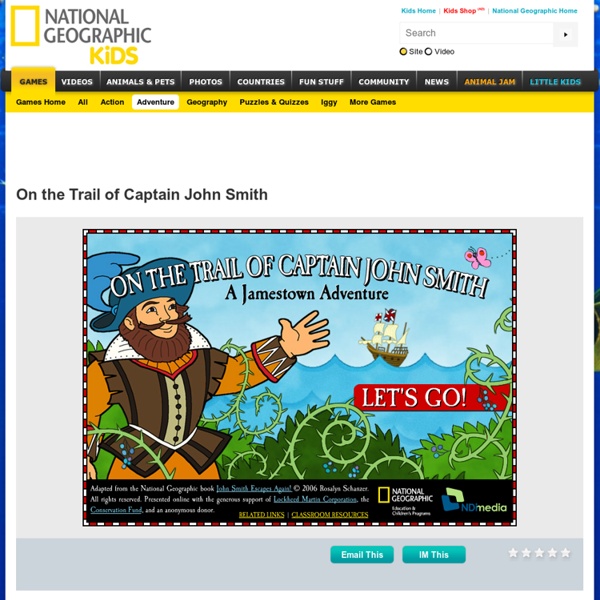 History Globe In 1606, some 105 adventurers set off from England to try and establish the first permanent English colony in the New World. They settled in what is now the state of Virginia and called their colony first James Fort, and then James Towne, in honor of James I, the King of England. The early years of the colony were nearly a total disaster. Almost half of the settlers died due to poor choices in settlement location, management of resources, and quarrels with the indigenous Powhatan Indians. You are the Captain of the Jamestown Colony: Can you do any better than the real colonists?

13 Colonies Trades and Jobs Cooper Coopers were tradesman who made casks, buckets, barrels, and containers for flour, gunpowder, tobacco, shipping, wine, milk, and other liquids. One kind of container, the hogshead, was used to ship huge quantities of tobacco from the colonies to England. Because the demand for containers was high, colonial coopers made millions of such containers every year. Although coopers are traditionally known for creating barrels (casks), it was actually the “tight cooper” who made them. Other coopers began specializing in making specific types of containers that they could mass produce quickly. Flight to Freedom: Introduction Slavery, according to historian and sociologist Orlando Patterson, was social death. This was especially so of the slavery practiced in the United States from its very founding as a colonial empire in 1609, to 1865, when ended the bloody struggle which abolished the institution and united the nation. During the three and one-half centuries of slavery's existence, millions of African-descended people were torn from their homes, separated from family and community, and brutally put to the lash for profit. These Africans resisted. In nearly every conceivable way, they registered their protest against their enslavement.

The Thirteen American Colonies The Thirteen American Colonies Part 1: Coming to America The first colonies in North America were along the eastern coast. Settlers from Spain, France, Sweden, Holland, and England claimed land beginning in the 17th century. 13 Colonies Map: 13 colonies names matching map game Select and drop the colony name on the dot Social Studies 13 Colonies Timeline13 Colonies Facts To link to this page, copy the following code to your site: <a href=" Colonies </a> Colonial Kids As of July 1, 2013 ThinkQuest has been discontinued. We would like to thank everyone for being a part of the ThinkQuest global community: Students - For your limitless creativity and innovation, which inspires us all. Teachers - For your passion in guiding students on their quest. Partners - For your unwavering support and evangelism.

Teach Dear America Colonial settlers came to America for many reasons. Some came for religious freedom. Some came to make money. They settled into 13 colonies, areas that are now the states known as New York, New Jersey, Pennsylvania, Virginia, North Carolina, South Carolina, Massachusetts, New Hampshire, Maryland, Georgia, Connecticut, Rhode Island, and Delaware. There were other scattered colonies like St. Augustine in what is now known as Florida.

English Lesson Plans on American Presidents “I am certain that after the dust of centuries has passed over our cities, we, too, will be remembered not for victories or defeats in battle or in politics, but for our contribution to the human spirit.” ~ John F. Kennedy 43 Ready-Made Lesson Plans Our American Presidents lesson section is finally complete! Quick View Comparison: Pilgrims, Puritans, Quakers for Kids - Who were they and what did they believe? Pilgrims: A small group of people arrived in the New World from England on a ship named the Mayflower. They landed at Plymouth Rock, Massachusetts. Back in England, everyone had to belong to the Church of England. The Pilgrims did not want to belong to the Church of England.