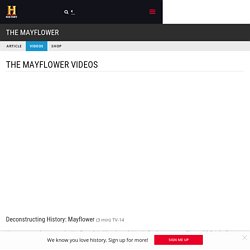 There will be new episodes and web exclusives added every day. How quickly does a new episode get added after it airs on TV? The Roanoke Colonists: Lost, and Found? MERRY HILL, N.C. — Under a blistering sun, Nicholas M. 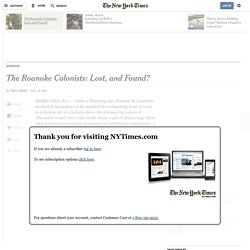 Luccketti swatted at mosquitoes as he watched his archaeology team at work in a shallow pit on a hillside above the shimmering waters of Albemarle Sound. On a table in the shade, a pile of plastic bags filled with artifacts was growing. Fragments of earthenware and pottery. A mashed metal rivet. A piece of a hand-wrought nail. They call the spot Site X. HORRIBLE HISTORIES - The Wives of Henry VIII (Terrible Tudors) 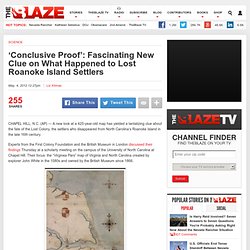 (AP) — A new look at a 425-year-old map has yielded a tantalizing clue about the fate of the Lost Colony, the settlers who disappeared from North Carolina’s Roanoke Island in the late 16th century. Experts from the First Colony Foundation and the British Museum in London discussed their findings Thursday at a scholarly meeting on the campus of the University of North Carolina at Chapel Hill. Their focus: the “Virginea Pars” map of Virginia and North Carolina created by explorer John White in the 1580s and owned by the British Museum since 1866. "La Virginea Pars", a map of the east coast of North America (c. 1585-87) produced by the Elizabethan artist and gentleman, John White (P&D 1906,0509.1.3, c. British Museum,) © Trustees of the British Museum (Photo and caption via First Colony Foundation) “Their intention was to create a settlement. 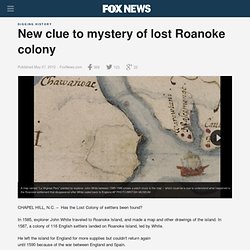 In 1585, explorer John White traveled to Roanoke Island, and made a map and other drawings of the island. In 1587, a colony of 116 English settlers landed on Roanoke Island, led by White. He left the island for England for more supplies but couldn't return again until 1590 because of the war between England and Spain. Mystery at Roanoke — History.com Video. The Story of Us — Life in Jamestown. Jamestown Founded in 1607. Jobs in Jamestown.