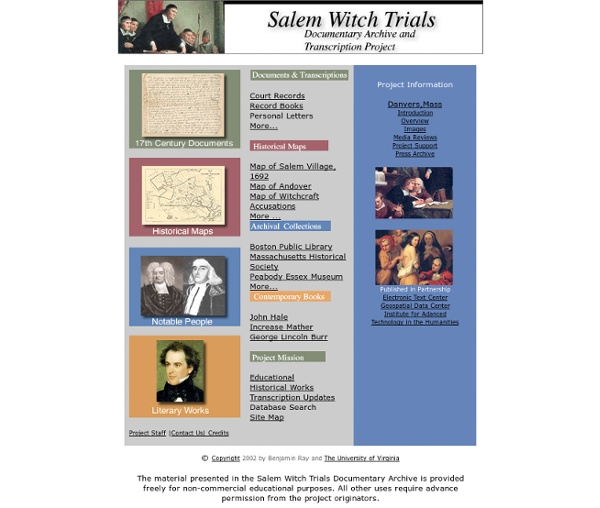 The Salem Witch Trials, 1692 The Salem Witch Trials, 1692 The seeds of the hysteria that afflicted Salem Village, Massachusetts were sown in January 1692 when a group of young girls began to display bizarre behavior. The tight-knit community was at a loss to explain the convulsive seizures, blasphemous screaming, and trance-like states that afflicted the youngsters. The physicians called in to examine the girls could find no natural cause of the disturbing behavior. In February the village began praying and fasting in order to rid itself of the devil's influence. In March the afflicted girls accused Martha Corey. Friday March 11, 1692 was a day of fasting and prayer in Salem. "On, Monday, the 21st. of March, the magistrates of Salem appointed to come to examination of Goodwife Corey. The number of the afflicted persons were about that time ten, viz. four married women: Mrs. The afflicted persons asked her why she did not go to the company of witches which were before the meeting house mustering.

Salem Witchcraft: the Events and Causes of the Salem Witch Trials By Tim Sutter © 2000-2003 What caused the Salem witch trials of 1692? This question has been asked for over 300 years. Although it is a simple question, it does not have an easy answer. The answer is difficult because there are numerous factors and events that helped create and influence the trials. Salem Politics Salem Village had a very colorful history before the famous witch trials. Many of the Salem Village farming families believed that Salem Town’s thriving economy made it too individualistic. The Putnams were the leaders of the separatist group primarily because they owned the most farmland in Salem Village. Contracts for ministers during this period often provided them with a modest salary, use of a house, and free firewood. In October of 1691 a new Salem Village Committee was elected that was comprised mostly of Parris’ opponents. Cold Winter Days The Rev. After chores were done, there was little entertainment for Betty and Abigail. Salem Witchcraft Aftermath The Rev.

Anne Bradstreet Salem Witch Craft Trials The following is taken in part from: The "Cory Family Newsletter", Volume 7, number 3, Sep 1992, "The History of Salem", Volume III, pages 286-293, "The Witchcraft Episode", pages 36-57, "Salem In The Seventeenth Century", Chapter XXV, "The Witches at Salem, 1692", by Dick Eastman on the Compuserve Genealogy Forum "Witches and Wizards", by Robert Ellis Cahill former Essex County (Mass.) Sheriff and Keeper of the Salem Jail. The opprobrious epithet of witch-city which has tenaciously clung to Salem since 1692 is due to the fact that the witch trials and executions took place in that town. Difficulties and acrimonious disputes over church affairs had long prevailed in this community, which reached a climax when the Rev. Parris' difficulties began at once. In the long and bitter winter of 1691-92, some young women and girls at Salem Village had some meetings to learn palmistry and fortune-telling from Tituba. This group, know as the afflicted children, included: In late February Mr. . . .

mental_floss Blog » The Quick 10: 10 Ways to Identify a Witch Today is a rather painful day in American history - the day the first three accused women were brought before the court in the Salem Witch Trials. As we know today, some of the measures taken to "prove" a person's guilt or innocence were absolutely ludicrous. But in case you'd like to employ some of them for yourself, here are 10 ways to identify a witch according to those running the Salem Witch Trials. 1. Make a witch cake. 2. 3. 4. 5. 6. 7. 8. 9. 10. Salem Witch Trials of 1692 Reverend Gentlemen, The innocency of our case, with the enmity of our accusers an our judges and jury, whom nothing but our innocent blood will serve, having condemned us already before our trials, being so much incensed and enraged against us by the devil, makes us bold to beg and implore your favourable assistance of this our humble tradition to his excellency, that if possible our innocent blood may be spared, which undoubtedly otherwise will be shed, if the Lord doth not mercifully step in; the magistrates, ministers, juries and all the people in general, being so much enraged and incensed against us by the delusions of the devil, which we can term no other, by reason we know in our own consciences we are all innocent persons. Here are five persons who have lately confessed themselves to be witches, and do accuse some of us being along with them at a sacrament, since we were committed into close prison, which we know to be lies. These actions are very like the popish cruelties.

Salem Massachusetts - Salem Witch Trials Chronology What evil spirit have you familiarity with? None. Have you made no contract with the devil? No. Dialogue based on the examination of Sarah Good by Judges Hathorne and Corwin, from The Salem Witchcraft Papers , Book II, p.355 January 20 Nine-year-old Elizabeth Parris and eleven-year-old Abigail Williams began to exhibit strange behavior, such as blasphemous screaming, convulsive seizures, trance-like states and mysterious spells. Mid-February Unable to determine any physical cause for the symptoms and dreadful behavior, physicians concluded that the girls were under the influence of Satan. Late February Prayer services and community fasting were conducted by Reverend Samuel Parris in hopes of relieving the evil forces that plagued them. Pressured to identify the source of their affliction, the girls named three women, including Tituba, Parris' Carib Indian slave, as witches. March 1 March 12 Martha Corey is accused of witchcraft. March 19 Rebecca Nurse was denounced as a witch. March 21 March 24