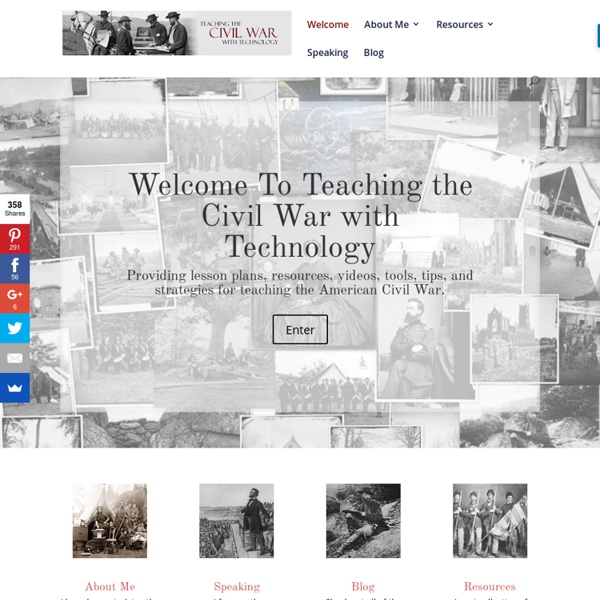 The purpose of this website is to provide you with lesson plans, tools, tips, and strategies for teaching the American Civil War. Overview of the need to teach the American Civil War “The world will little note nor long remember what we say here, but it can never forget what they did here.” This simple sentence was spoken on November 19, 1863, by President Abraham Lincoln when he gave the now famous Gettysburg Address and it reminds us of how important it is that we take every opportunity to teach our students about the American Civil War. The reason for this can be summed up by the late author and historian Shelby Foote: “Any understanding of this nation has to be based and I mean really based, on an understanding of the Civil War.

Overview - The 54th Massachusetts Infantry attacking Fort Wagner Painting by Rick Reeves On June 16, 1864, President Abraham Lincoln made one of his rare wartime departures from Washington. He spoke in Philadelphia at a fund-raising fair for the United States Sanitary Commission, a national soldiers' aid society. The preceding six weeks had seen the bloodiest fighting in the Civil War so far, at the carnage-strewn Virginia battlefields of The Wilderness, Spotsylvania, Cold Harbor, and Petersburg.

Politics Explained FEUDALISM: You have two cows. Your lord takes some of the milk. PURE SOCIALISM: You have two cows. The government takes them and puts them in a barn with everyone else's cows. You have to take care of all of the cows. Henry O. Nightingale diaries MSS.002 Description Henry O. Nightingale (1844-1919) and his family emigrated from Hawkhurst, County Kent, England, to the United States in 1849. He, his parents, and his younger brother arrived in New York from London aboard the Margaret Evans on June 30 when Henry was 5 years old.

hughesDV's Channel Upload Tip the Teacher Subscription preferences Exhibitions: The Civil War and American Art / American Art November 16, 2012 – April 28, 2013 Explore View slide show and comments Buy the book Watch the video trailer Listen to the podcast with commentary by exhibition curator Eleanor Harvey Check out the exhibition galleries on Flickr See selected artworks in historical context with our timeline Attention Educators! Download our Teacher Guide Watch webcast presentations from the symposium Effects of the Civil War on American Art Attend exhibition-related public programs Go behind-the-scenes with the museum's blog, Eye Level Who is talking about the exhibition? See if the exhibition is visiting your hometown Eastman Johnson, The Girl I Left Behind Me, ca. 1872, Smithsonian American Art Museum, Museum purchase made possible in part by Mrs.

Economics Login | Register Home » Learning Zone » Economics » Economics Economics Follow WWII as it happened, tweet by tweet Alwyn Collinson has undertaken an impressive and unique project, that will bring to life one of the most significant events in history to life, completely through Twitter. He is recreating each day of WWII through Twitter, by updating the account several times each day with a significant event from the war, showing how it progressed. The account is being rigorously updated by Alwyn, which will hopefully continue throughout the 6 year project. The updates include news such as how many have been wounded, quotes from prominent politicians and other public figures, as well as detail into how people are preparing for war : It is a seriously impressive project and one of the most unusual uses of Twitter I've seen. The project is being run as a unique way to unite people today with people back then, by communicating the details of day to day life.

Propaganda: Analysis & Examples What is propaganda? Information, ideas, or rumors designed to influence the way you think and act; propaganda may "stretch the truth" or it may not tell you "the whole truth, and nothing but the truth." Kinds of persuasive techniques: Name-calling and glittering generalities euphemisms transference testimonials humor plain folks appeal bandwagon fear repetition emotional appeal faulty cause and effect comparison and contrast. To learn more about kinds of propaganda, go to: Official US Executive Branch Web Sites - Newspaper and Current Periodical Reading Room (Serial and Government Publications Division, Library of Congress) This page contains Executive Branch sites only. With the time we have available, it is not possible to keep this page totally comprehensive. Agencies are often included because they requested to be listed. For more government sites, see: Legislative, Judicial or Government Resources in general. Executive Office of the President (EOP): Executive Agencies: