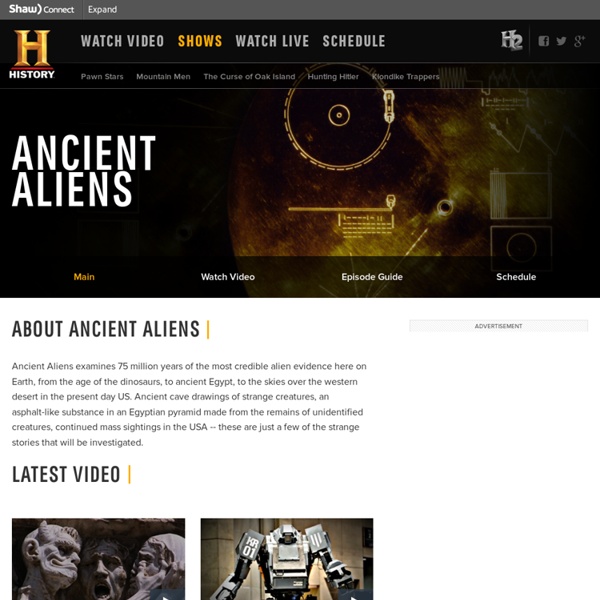 Ancient Aliens examines 75 million years of the most credible alien evidence here on Earth, from the age of the dinosaurs, to ancient Egypt, to the skies over the western desert in the present day US. Ancient cave drawings of strange creatures, an asphalt-like substance in an Egyptian pyramid made from the remains of unidentified creatures, continued mass sightings in the USA -- these are just a few of the strange stories that will be investigated.

Related:  α CMa • Documentaries 2 see before u wake up

Sirius - A Triple Star System How true is it in terms of astronomy? from The DogonAndSirius Website Sirius C exists We should not be surprised. To quote a conservative source, the Harvard Bright Star Catalog: "C, companion to B at 1.4" suspected but not confirmed" John Pilger Documentaries "We were sold this war on the basis of Iraq possessing a massive arsenal of weapons of mass destruction, which was never found, and won't be found, because there was no massive arsenal of weapons. We were also promised a need for war on the basis of active cooperation between Iraq and Al-Qaeda and the fact that it was just a matter of time before some of these weapons from this massive arsenal were passed to this terrorist group...There was no hard intelligence to establish there was a link between Iraq and Al-Qaeda." John Pilger dissects the truth and lies in the 'war on terror'. Award-winning journalist John Pilger investigates the discrepancies between American and British claims for the 'war on terror' and the facts on the ground as he finds them in Afghanistan and Washington, DC. In 2001, as the bombs began to drop, George W. Bush promised Afghanistan "the generosity of America and its allies".

INFORMATION OR DISINFORMATION - MOON & EXO PLANETS.2010_YouRmomSnutZ - torrent This is a TORRENT File how to download a torrent: Install this Program to download torrents + 705 new pictures!!! Whooeee!!! Can you smell that??? That is the Fire of real progress burning!!!

Giorgio A. Tsoukalos Giorgio on Facebook! Follow Giorgio on Twitter! Gold Flyer Pin as worn by Giorgio! Get your own right here. Giorgio A. Tsoukalos is the star and Consulting Producer of ANCIENT ALIENS - THE SERIES (2010-2012) and publisher of Legendary Times Magazine, the only Ancient Astronaut publication in the world. The Mysterious Connection Between Sirius and Human History Since ancient times and across multiple civilizations, Sirius, the dog star, has been surrounded with a mysterious lore. Esoteric teachings of all ages have invariably attributed to Sirius a special status and the star’s importance in occult symbolism is an attestation of that fact. What makes Sirius so special? Sprword.com - Spread the Word Real Scientific Evidence of Controlled Implosion "The preconceived notion of NIST is that there's no evidence for explosives, as in there is no point in looking. That is the most unscientific thing which you can possibly think of.

David Hatcher Childress Biography[edit] Born in France to American parents, and raised in Colorado and Montana, United States, Childress went to University of Montana-Missoula to study archaeology, but left college in 1976 at 19 to begin travelling in pursuit of his archaeological interests.[1][b] After several years in Asia and then Africa, Childress moved in 1983 to Stelle, Illinois, a community founded by New Age writer Richard Kieninger; Childress had been given one of Kieninger's books while touring Africa.[1] Childress chronicled his explorations in the 1970s, 1980s and 1990s in his Lost Cities and Ancient Mysteries series of books. Childress's first book, A Hitchhikers Guide to Africa and Arabia, was published in 1983 by Chicago Review Press. In 1984, Childress moved to Kempton, Illinois and established a publishing company named Adventures Unlimited Press,[1][2] which is a sole proprietorship. Criticism[edit]

I agree! It's impossible to watch this series without raising your eyebrows and saying, "Hmmm..." Some of it is a little 'out there' but much of it seems to make very good sense! by hippiegal Nov 23

alot of questions are being ignored...this really shows another side to our past that is blatently there in front of our faces. by marcfawsitt Nov 11