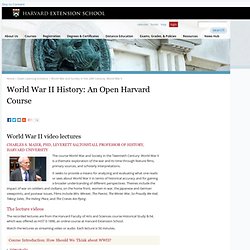 It seeks to provide a means for analyzing and evaluating what one reads or sees about World War II in terms of historical accuracy and for gaining a broader understanding of different perspectives. Themes include the impact of war on soldiers and civilians, on the home front, women in war, the Japanese and German viewpoints, and postwar issues. Films include Mrs. Miniver, The Pianist, The Winter War, So Proudly We Hail, Taking Sides, The Hiding Place, and The Cranes Are Flying. The lecture videos The recorded lectures are from the Harvard Faculty of Arts and Sciences course Historical Study B-54, which was offered as HIST E-1890, an online course at Harvard Extension School. Watch the lectures as streaming video or audio. Course Introduction: How Should We Think about WWII? Hitler vs. America’s War. University of Oregon. Office of the Dean of Personnel Administration. National Japanese American Student Relocation Council Records 1942-1946. Conversations with History - James M. McPherson. 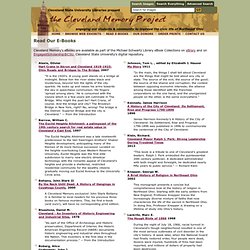 A young poet stands on a bridge at midnight. Below him the river slides black and mysterious, beyond him the lights of the city sparkle. He looks up and raises his arms towards the sky in speechless communion. His fingers 'spread among stars.' Barrow, William C. The Euclid Heights Allotment was a late nineteenth predecessor to the Van Sweringen brothers' Shaker Heights development, anticipating many of the themes of its more famous successor. Bellamy, John Stark II By the Neck Until Dead: A History of Hangings in Cuyahoga County, 2000 A Cleveland Memory exclusive! Bluestone, Daniel M. 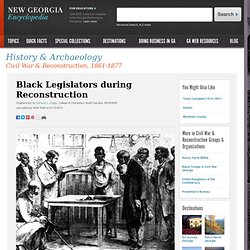 He was the most successful black politician in organizing the black Republican vote and attracted other ministers into politics. He was a delegate to the Georgia constitutional convention of 1867 and was elected to two terms in the Georgia legislature, beginning in 1868. Campbell, a native of New Jersey, was a minister in the African Methodist Episcopal Zion Church. In 1864 he was appointed an agent of the Freedmen's Bureau on the Georgia Sea Islands.

He later moved to the mainland. Born in South Carolina, Bradley was a shoemaker in Augusta. America in Vietnam Page 00. From Revolution to Reconstruction: Outlines: Outline of American History (2005) Congressional Research Service Reports: About this Collection: UNT Digital Library. About This Collection The Congressional Research Service (CRS) does not provide direct public access to its reports, requiring citizens to request them from their Members of Congress. 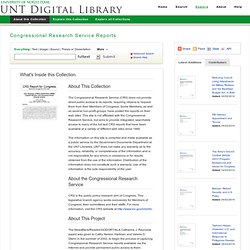 Some Members, as well as several non-profit groups, have posted the reports on their web sites. This site is not affiliated with the Congressional Research Service, but aims to provide integrated, searchable access to many of the full-text CRS reports that have been available at a variety of different web sites since 1990. The information on this site is compiled and made available as a public service by the Government Documents Department at the UNT Libraries. Calisphere - A World of Digital Resources. 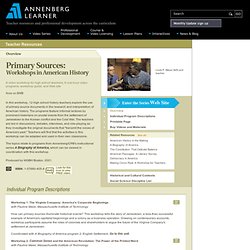 The Virginia Company: America's Corporate Beginnings with Pauline Maier, Massachusetts Institute of Technology How can primary sources illuminate historical events? This workshop tells the story of Jamestown, a less-than-successful example of America's capitalist beginnings and a colony as a business operation. Drawing on contemporary accounts, workshop participants assume the roles of colonists and shareholders to argue the future of the Virginia Company's settlement at Jamestown. Coordinated with A Biography of America program 2: English Settlement. 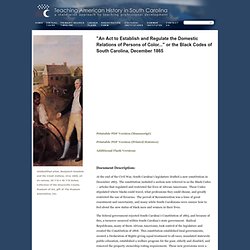