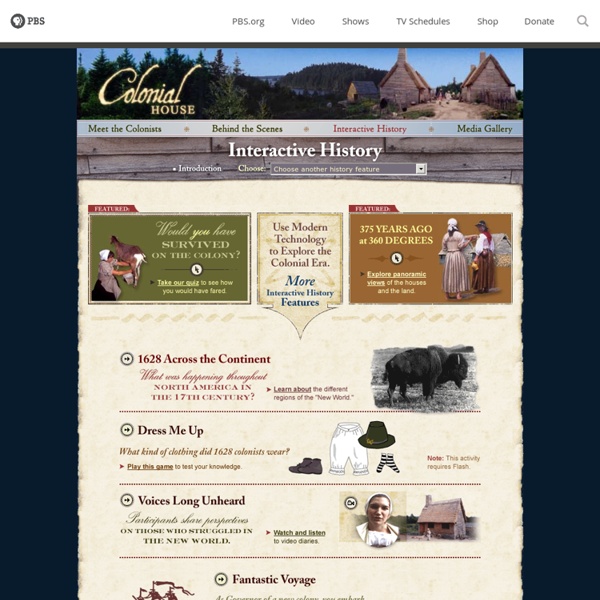 Quick View Comparison: Pilgrims, Puritans, Quakers for Kids - Who were they and what did they believe? - 1 Pilgrims: A small group of people arrived in the New World from England on a ship named the Mayflower. They landed at Plymouth Rock, Massachusetts. Back in England, everyone had to belong to the Church of England. The Pilgrims did not want to belong to the Church of England. They were seeking religious freedom from the Church of England. Puritans: About 10 years later, a large group of people called the Puritans arrived in the New World, also from England. Alike: Both groups spoke English. Quakers: There was another religious group in the colonies called the Quakers. The Thirteen Colonies The 13 Colonies - good information about each state 50 States - current information, flags, some history Daily Life in the Colonies (Interactive) A Colonial Family and Community (Interactive) Food in Colonial Times Colonial Clothing (Interactive) 18th Century Clothing in Colonial Williamsburg Colonial Life - Meet the People Presidential Information An Outline of American History - The Colonial Times

Southern Colonies - The 13 Colonies for Kids Life in the Southern Colonies Life was very different in the rural southern colonies of Virginia, Maryland, North Carolina, South Carolina, and Georgia. The weather in the south provided a long growing season, which allowed crops like rice, cotton, and tobacco to flourish. The south also exported indigo (a blue dye made from native plants). To produce enough rice or cotton or tobacco to make a profit took a great deal of land and labor. In the south, huge plantations developed, owned and governed by one family. For labor, the plantation owners first used indentured servants, people who had exchanged passage to the New World for a great deal of work when they arrived. The economic and social structure of the rural southern colonies rested on great plantations and smaller farms.

History Globe In 1606, some 105 adventurers set off from England to try and establish the first permanent English colony in the New World. They settled in what is now the state of Virginia and called their colony first James Fort, and then James Towne, in honor of James I, the King of England. The early years of the colony were nearly a total disaster. Almost half of the settlers died due to poor choices in settlement location, management of resources, and quarrels with the indigenous Powhatan Indians. You are the Captain of the Jamestown Colony: Can you do any better than the real colonists? You will have a copy of the London Company's Instructions to help guide you. Scoring Factors: After you make all your decisions, you will receive a report on the state of your colony based on these factors: Food: How well can you provide it for your colonists? Make History: You will get to compare your colony to the historical Jamestown at the end. Good luck and Godspeed!

“A Push” in the Right Direction Aug 6 2012 Introduction FDR once said, “Be sincere, be brief, be seated.” In recent years I have attempted to find ways to “get out of the way” of student learning more, and not be the omnipotent source of information and ideas. This past year, this led to my adventures in the world of tweeting. I began this year with lofty AP U.S. It was in the midst of this mid-season reflection that I remembered two important tenants I’ve tried to hold on to in teaching: Students need authentic assessment.Just because I taught it, doesn’t necessarily mean they learned it. Then I remembered an idea I had before the year began: the @apushhelp Twitter feed. The purpose of this assignment was twofold. I am by no means a Twitter regular. The Meat and Potatoes Students were required to sign up for up to one week a quarter. I wanted the kids to demonstrate their knowledge in a way that benefited other teachers and students. Students had to leave room for a “hashtag” for each tweet. Final Analysis

New England Colonies - The 13 Colonies for Kids The New England colonies were composed of the colonies of New Hampshire, Rhode Island, Connecticut, and Massachusetts. In the New England colonies, land was given to a colony by the crown (the king or queen of England.) In these early days of settlement, a colony was not a state. A colony was a business. Each colony was in the business of sending riches back to England in exchange for money, tools, and supplies they needed in their colony. Each colony had a central government. Towns varied greatly in size. The core of the "town" was the village. The poor were assigned the worse farm plots and lived at the edge of the village. The "town" approach did continue into the early 18th century, but it never got much beyond the New England colonies. The tight hold the New World towns initially held on the early settlers through the establishment of colonial central government approved "towns" soon disappeared.

First, Second, and Third World And why is our music called world music? I think people are being polite. What they want to say is that it's third world music. Like they use to call us under developed countries, now it has changed to developing countries, it's much more polite. Miriam Makeba The First, the Second, and the Third World. To close the gap of information you will find here explanations of the terms. The use of the terms First, the Second, and the Third World is a rough, and it's safe to say, outdated model of the geopolitical world from the time of the cold war. First there was the three worlds model The origin of the terminology is unclear. __ Definitions The term "First World" refers to so called developed, capitalist, industrial countries, roughly, a bloc of countries aligned with the United States after World War II, with more or less common political and economic interests: North America, Western Europe, Japan and Australia. Countries of the "First World" Countries of the "Second World" see

Grim Life Cursed Real Pirates of Caribbean Stefan Lovgrenfor National Geographic News July 11, 2003 Pirates have been figures of fascination and fear for centuries. The most famous buccaneers have been shrouded in legend and folklore for so long that it's almost impossible to distinguish between myth and reality. Hollywood movies—filled with buried treasures, eye patches, and the Jolly Roger—depict pirate life as a swashbuckling adventure. In the latest flick, Disney's Pirates of the Caribbean: The Curse of the Black Pearl, which sails into theaters today, the pirate hero, played by Johnny Depp, is a lovable rogue. But what was life really like for an early 18th-century pirate? The life of a pirate was never as glorious and exciting as depicted in the movies, said David Moore, curator of nautical archaeology at the North Carolina Maritime Museum in Beaufort. Valuable Loot When the money finally arrived, Caesar was let go.

The Rise of Hitler: Mr. Men project The following activity is a great way of rounding off or revising the Rise of Hitler with IGCSE students. They produce a 'Mr. Men' book about the topic and then read these to primary school / Year 7 students in a team challenge. A. Pre-activity preparation for Year 11 Prior to this activity, Year 11 students should have finished studying the Rise of Hitler. Pre-activity preparation for Year 6 Year 6 students should have spent some time (at least an hour or two) working through the tasks and ideas in this preparatory worksheet. B. Setting up the class Year 6 will be divided into groups. Year 11 form a 'queue' of storytellers. The First Story Each group listens to the story read to them by the storyteller. Subsequent Stories When a team has finished with their storyteller, the storyteller goes to the back of the queue of storytellers. Close the lesson by asking Year 6 which books they enjoyed most / which readers they found read the best. These notes can be printed off as a .pdf file here.