When is Thanksgiving? Colonizing America: Crash Course US History #2 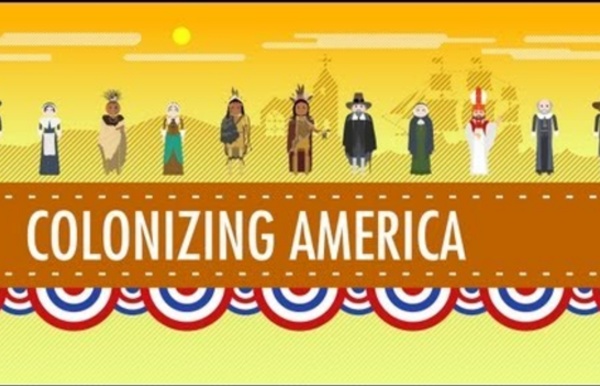 The Roanoke Colonists: Lost, and Found? MERRY HILL, N.C. — Under a blistering sun, Nicholas M. Luccketti swatted at mosquitoes as he watched his archaeology team at work in a shallow pit on a hillside above the shimmering waters of Albemarle Sound. On a table in the shade, a pile of plastic bags filled with artifacts was growing. Fragments of earthenware and pottery. A mashed metal rivet. ‘Slam-dunk’ find puts hunter-gatherers in Florida 14,500 years ago Big game hunters of the Clovis culture may have just gotten the final blow to their reputation as North America’s earliest settlers. At least 1,000 years before Clovis people roamed the Great Plains, a group of hunter-gatherers either butchered a mastodon or scavenged its carcass on Florida’s Gulf Coast. Stone tools discovered in an underwater sinkhole in the Aucilla River show that people were present at the once-dry Page-Ladson site about 14,550 years ago, reports a team led by geoarchaeologists Jessi Halligan of Florida State University in Tallahassee and Michael Waters of Texas A&M University in College Station. The Clovis people appeared in North America around 13,000 years ago. Radiocarbon dating of twigs, seeds and plant fragments from submerged sediment layers provides a solid age estimate for six stone artifacts excavated by scuba divers, the team reports May 13 in Science Advances. Five of those finds consist of thin pieces of stone hammered off chunks of rock.

American Passages - Unit 3. Utopian Promise: Authors Authors: Anne Bradstreet (c. 1612-1672) Anne Bradstreet was born in England in 1612 to well-connected Puritan parents. Her father, Thomas Dudley, was unusual in his commitment to teaching his daughter literature, history, and philosophy, and Bradstreet benefited from an extensive classical education such as was usually reserved only for male children. Her sixty years of life were troubled by recurring sickness and ill health, beginning with an attack of smallpox when she was sixteen. Shortly after recovering, she married her father's assistant, Simon Bradstreet. She immigrated to America with her husband and parents in 1630 as part of the group that sailed with John Winthrop on the Arbella .

How to Develop Mindsets for Compassion and Caring in Students Early in his career Dr. Robert Brooks became the principal of a school in a locked-door unit at McLean Psychiatric Hospital. He and his staff of teachers worked with children and adolescents who were severely disturbed and whose behavior showed their turmoil. Within the first few months, Brooks felt demoralized and dreaded work each day. Deconstructing History: Mayflower Video - The Mayflower My TV provider is not listed. Why not? We are currently working on adding more TV providers. Please check back frequently to see if your TV provider has been added. Why do I need to log in to watch some video content? Viewers who verify their subscription to a TV provider get access to a deeper catalog of video content, including more full episodes.

Meet Jane, the 14-year-old eaten when the first British settlers in America turned to cannibalism: The macabre secrets of starving pioneers besieged by Red Indians Skull of a 14-year-old girl, named 'Jane of Jamestown', shows scratch marks Anthropologists from the Smith-sonian National Museum of Natural History analysed her skull and severed leg bones Dr Douglas Owsley said bones evidence of 'survival cannibalism' Human remains date back to the deadly winter of 1609-1610, known as the 'starving time' in Jamestown, when hundreds of colonists died By Annabel Venning for MailOnline Published: 22:35 GMT, 15 May 2013 | Updated: 22:35 GMT, 15 May 2013

Anne Bradstreet Anne Bradstreet was the first woman to be recognized as an accomplished New World Poet. Her volume of poetry The Tenth Muse Lately Sprung Up in America ... received considerable favorable attention when it was first published in London in 1650. Eight years after it appeared it was listed by William London in his Catalogue of the Most Vendible Books in England, and George III is reported to have had the volume in his library. Bradstreet's work has endured, and she is still considered to be one of the most important early American poets. Although Anne Dudley Bradstreet did not attend school, she received an excellent education from her father, who was widely read— Cotton Mather described Thomas Dudley as a "devourer of books"—and from her extensive reading in the well-stocked library of the estate of the Earl of Lincoln, where she lived while her father was steward from 1619 to 1630.