Digital History. An Online Reference Guide to African American History by Professor Quintard Taylor, University of Washington. Independent Lens . NAT TURNER: A Troublesome Property . Slave Rebellions. Slave owners lived in fear of slave revolts, a fear which was far from unfounded: from the Amistad mutiny to the Underground Railroad, American slaves—led by themselves or with the help of abolitionists—staged many instances of revolt and resistance. 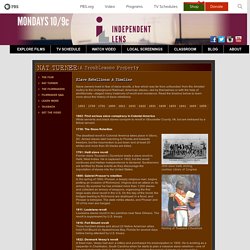 Read the timeline below to learn more about the history of slave rebellions. 1663: First serious slave conspiracy in Colonial America White servants and black slaves conspire to revolt in Gloucester County, VA, but are betrayed by a fellow servant. 1739: The Stono Rebellion The deadliest revolt in Colonial America takes place in Stono, SC. Armed slaves start marching to Florida and towards freedom, but the insurrection is put down and at least 20 whites and more than 40 blacks are killed. 1791: Haiti slave revolt Former slave Toussaint L'Ouverture leads a slave revolt in Haiti, West Indies. 1811: Louisiana revolt Louisiana slaves revolt in two parishes near New Orleans. 1831: Nat Turner’s revolt Sources. American Anti-Slavery and Civil Rights Timeline. Timeline compiled by V. 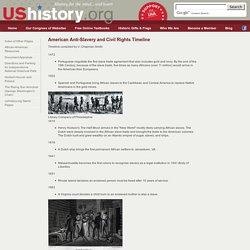 Chapman Smith Portuguese negotiate the first slave trade agreement that also includes gold and ivory. By the end of the 19th Century, because of the slave trade, five times as many Africans (over 11 million) would arrive in the Americas than Europeans. Spanish and Portuguese bring African slaves to the Caribbean and Central America to replace Native Americans in the gold mines. Library Company of Philadelphia Henry Hudson's The Half Moon arrives in the "New World" mostly likely carrying African slaves. 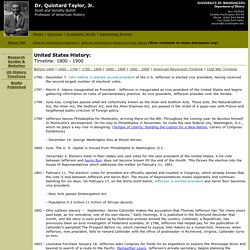 John Adams is elected second president of the U.S. Jefferson is elected vice president, having received the second largest number of electoral votes. 1797 - March 4. Adams inaugurated as President - Jefferson is inaugurated as vice president of the United States and begins gathering information on rules of parliamentary practice. 1798 - June-July. 1799 - Jefferson leaves Philadelphia for Monticello, arriving there on the 8th.

Digital History. Facts Summary Timeline. Westward Expansion summary: The story of the United States has always been one of westward expansion, beginning along the East Coast and continuing, often by leaps and bounds, until it reached the Pacific—what Theodore Roosevelt described as "the great leap Westward. 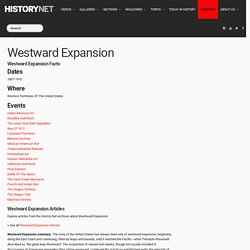 " The acquisition of Hawaii and Alaska, though not usually included in discussions of Americans expanding their nation westward, continued the practices established under the principle of Manifest Destiny. Even before the American colonies won their independence from Britain in the Revolutionary War, settlers were migrating westward into what are now the states of Kentucky and Tennessee, as well as parts of the Ohio Valley and the Deep South. Westward the Course of Empire The debate over whether the U.S. would continue slavery and expand the area in which it existed or abolish it altogether became increasingly contentious throughout the first half of the 19th century. Timeline of Westward Expansion Manifest Destiny. America's Best History - U.S. History Timeline: The 1800's - Exploration. Territorial Expansion, Filibustering, and U.S. Interest in Central America and Cuba, 1849–1861 - 1830–1860. 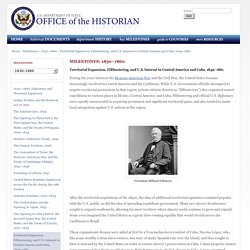 Interest in Central America and Cuba, 1849–1861 During the years between the Mexican-American War and the Civil War, the United States became increasingly involved in Central America and the Caribbean. While U.S. Government officials attempted to acquire territorial possessions in that region, private citizens (known as “filibusterers”) also organized armed expeditions to various places in Mexico, Central America, and Cuba.