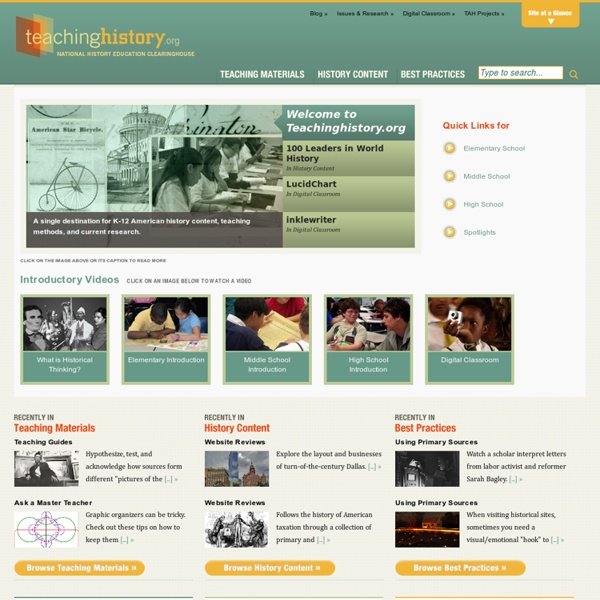 Related:  Once Upon A Time • Educational Websites • Teorie • VÄRLDSHISTORIA • History

China 1911: The Birth of China's Tragedy Jonathan Fenby argues that the failings of China's 1911 revolution heralded decades of civil conflict, occupation and suffering for the Chinese people. Chinese rebel leaders Liu Fuji (left) and Peng Chufan were arrested and beheaded early on October 10th. The Chinese displayed their heads as a warning, ‘killing the chicken to scare the monkeys’, but the Republican government honoured them as martyrs. Collections In this section of the site we bring you curated collections of images, books, audio and film, shining a light on curiosities and wonders from a wide range of online archives. With a leaning toward the surprising, the strange, and the beautiful, we hope to provide an ever-growing cabinet of curiosities for the digital age, a kind of hyperlinked Wunderkammer – an archive of materials which truly celebrates the breadth and variety of our shared cultural commons and the minds that have made it. Some of our most popular posts include visions of the future from late 19th century France, a dictionary of Victorian slang and a film showing the very talented “hand-farting” farmer of Michigan. With each post including links back to the original source we encourage you to explore these wonderful online sources for yourself. Check out our Sources page to see where we find the content.

Teach World History! Custom Search Learning about and understanding World History is crucial for a plethora of reasons. You can’t really comprehend the present or be prepared for the future unless you know something about the past. That means learning about both the spectacular accomplishments of human beings and their evil acts and honest mistakes. That is what World History is all about! About UDL What is Universal Design for Learning? Universal Design for Learningis a set of principles for curriculum development that give all individuals equal opportunities to learn. UDL provides a blueprint for creating instructional goals, methods, materials, and assessments that work for everyone--not a single, one-size-fits-all solution but rather flexible approaches that can be customized and adjusted for individual needs. Why is UDL necessary?

Center for History and New Media - Scribe About New! Scribe 3.5 is available: Download Scribe 3.5 New Features in Scribe 3.5 Improved export to Zotero - Read about Scribe to Zotero Transition Cleans up undefined empty cards on import from previous versions BA (Honours) English Language and Literature On this page Description This degree course offers a stimulating and wide-ranging introduction to English language and literature.

The “Best” Resources For Learning About The Israeli-Palestinian Conflict (This post was originally published during the 2008 Israeli invasion of the Gaza Strip, but it includes broader resources on the conflict and is regularly updated, including the 2014 conflict) I’m emphasizing the quotation marks surrounding the word “Best” in the title of this post. In light of what is happening in Gaza and Israel right now, and its potential for even greater violence, I thought I would begin to put together some resources that would be handy when we go back to school in a week. I’ll certainly be adding more to this list as time goes on, but at least it’s a start. It’s not that easy finding good material out there that’s accessible to English Language Learners, which is a requirement for anything to be included in a “The Best…” list or, in fact, for pretty much anything that I post about here.

Cave painting, contemporary art and everything in between Smarthistory offers more than 1500 videos and essays on art from around the world and across time. We are working with more than 200 art historians and some of the world's most important museums to make the best art history resource anywhere. Use the "subject" pulldown menu (go to "Arts and Humanities") at the top of this window or click on the headings below to access our content: Art history basics Immigration to the US - , 1789-1930 Immigration to the United States, 1789-1930, is a web-based collection of historical materials from Harvard's libraries, archives, and museums that documents voluntary immigration to the United States from the signing of the Constitution to the onset of the Great Depression. Concentrating heavily on the 19th century, Immigration to the US includes over 400,000 pages from more than 2,200 books, pamphlets, and serials, over 9,600 pages from manuscript and archival collections, and more than 7,800 photographs. By incorporating diaries, biographies, and other writings capturing diverse experiences, the collected material provides a window into the lives of ordinary immigrants. In addition to thousands of items that are now accessible to any Internet user, the collection includes contextual information on voluntary immigration and quantitative data.

Astronomical Insignificance of Maya Date 13.0.0.0.0. - by Vincent H. Malmström In effect, stated in terms more familiar to those of us using the Gregorian calendar, it would be like saying that the beginning of the present world took place on a day numbered “4” which fell on a Saturday about the middle of December, with no thought being given to what had transpired on the first six days of the week or during the first eleven months of the year! This seeming non sequitur appears not to have disturbed either the Olmecs or the Maya. In 1582 when the Dutch chronologist Joseph Scaliger devised a similar system for counting days consecutively from a fixed beginning point, he made sure that his tally conformed to the logic and constraints of the western European culture to which he was an heir. Accordingly, his count began on the first day of the week (Sunday) and on the first day of the first month of the year (January 1).