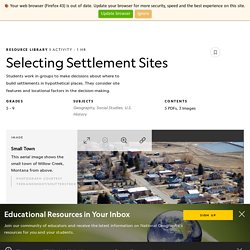 Brainstorm factors that would influence the location of a settlement. Have a whole class discussion about the settlement of students’ town. Write this question on the board: Why do you think our town is here? Students will have a variety of ideas related to industry, natural resources, access to transportation, food, water, and more. List their ideas below the question. Brainstorm the needs people likely had when deciding to build a town 100-200 years ago, before air and car travel were commonplace. 2. Explain that extensive settlement in the United States took place during the 1800s. Distribute a copy of the worksheet Site Map: 1800 to each student. Engage the whole class in a discussion about their choices and their reasons, modeling the process they will use in small groups later. 3.

Distribute to each student three worksheets: Site Map: 1830, Site Map: 1860, and Site Map: 1890. 4. Divide students into small groups and have them refer to the three site maps from Step 3 together. State of Affairs Between the Native Americans and the European Settlers. K-12 Objectives | Materials Needed | Procedures | Assessment | Resources | Standards Discipline: American History Specific lesson topic: Using online primary resources to examine relations between the Native Americans and the European settlers during the Age of Discovery Methodology: Primary Sources K-12 Objectives: Students will use primary sources to examine the past. 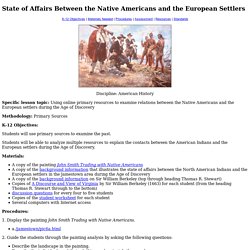 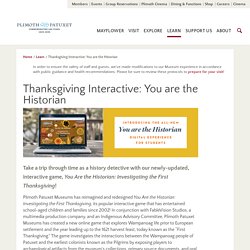 Plimoth Patuxet Museums has reimagined and redesigned You Are the Historian: Investigating the First Thanksgiving, its popular interactive game that has entertained school-aged children and families since 2002! In conjunction with FableVision Studios, a multimedia production company, and an Indigenous Advisory Committee, Plimoth Patuxet Museums has created a new online game that explores Wampanoag life prior to European settlement and the year leading up to the 1621 harvest feast, today known as the “First Thanksgiving.

" A History of Thanksgiving. Pilgrim Hall Museum - About the Pilgrims. Sargent’s “Landing of the Pilgrims" The Pilgrims have become larger than life figures in American history, their story an enduring narrative of America’s founding. 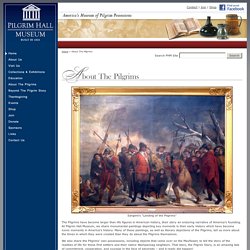 At Pilgrim Hall Museum, we share monumental paintings depicting key moments in their early history which have become iconic moments in America’s history. History Globe. In 1606, some 105 adventurers set off from England to try and establish the first permanent English colony in the New World. 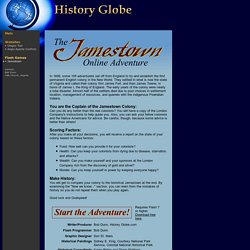 They settled in what is now the state of Virginia and called their colony first James Fort, and then James Towne, in honor of James I, the King of England. The early years of the colony were nearly a total disaster. Almost half of the settlers died due to poor choices in settlement location, management of resources, and quarrels with the indigenous Powhatan Indians. You are the Captain of the Jamestown Colony: Can you do any better than the real colonists? You will have a copy of the London Company's Instructions to help guide you. Scoring Factors: After you make all your decisions, you will receive a report on the state of your colony based on these factors: Food: How well can you provide it for your colonists? Make History: You will get to compare your colony to the historical Jamestown at the end. Good luck and Godspeed! National Portrait Gallery. Pocahontas c. 1595–1617 | Born near present-day Richmond, Virginia (left image) Unidentified artist, after Simon van de Passe | Oil on canvas, after 1616 | Transfer from the National Gallery of Art; gift of the A. 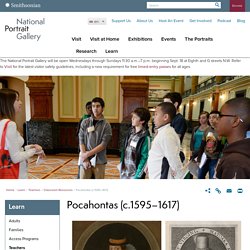 W. Mellon Educational and Charitable Trust, 1942 (right image) Simon van de Passe, 1595–1647 | Engraving on paper, 1616 Pocahontas, the Indian princess who allegedly saved the life of English colonist John Smith, survives and flourishes as an example of an early American heroine. While Smith certainly embellished the story of his rescue, the importance of Pocahontas to relations between colonists and Native Americans is undisputed. Following her conversion to Christianity and marriage to Englishman John Rolfe, Pocahontas journeyed to England with her family to demonstrate the ability of new settlers and native tribes to coexist in the Virginia colony. In 1616, while in England, Pocahontas sat for her portrait, which was engraved by Simon van de Passe. Historic Jamestowne. Historic Jamestowne. K-12 Articles about Exploration. From Slavery to Freedom in Colonial Times. Smithsonian's History Explorer. Grade Range: 5-8 Resource Type(s): Reviewed Websites, Primary Sources, Lessons & Activities Duration: 90 minutes Date Posted: 10/12/2016 This historical investigation is aligned with the C3 Framework and from C3teachers.org. 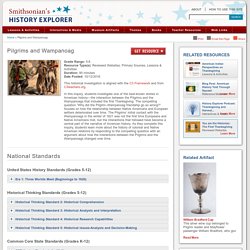