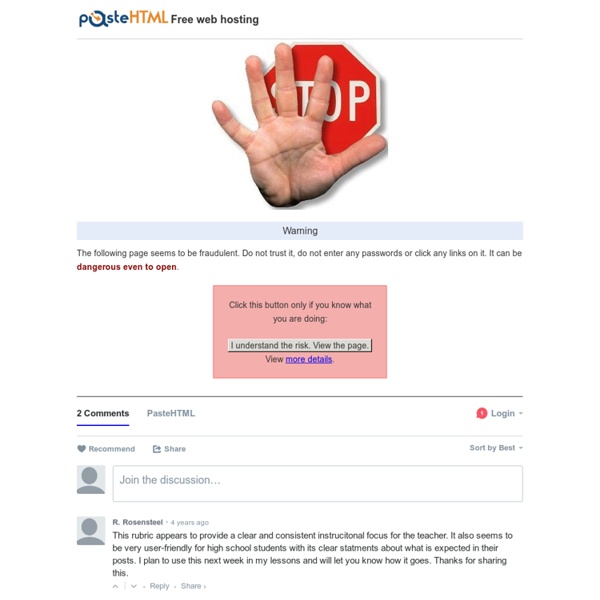 Edmodo Scavenger Hunt Video Playlist I finally decided to do something that I been putting off for too long - finishing my scavenger hunt videos (I only had three left to record, and it took me less than 5 minutes - shesh) and adding the last 8 mini-videos to my MentorMob playlist. So I did it today! I decided to do an edmodo scavenger hunt because some of my students will be familiar with edmodo (because I had them last year and we used it) and some of my students have most likely never heard of it (Some of my students last year did talk about it to students who weren't in my class). I decided to break the scavenger hunt into steps (18 to be exact) and include a checklist on paper so my students could check it off as they go and get a visual of their progress. Most of the videos are under 2 minutes (Step 12 or 13- can't remember which - is 5 minutes). Create your own Playlist on MentorMob! On a side note, I love mentor mob. I'm going to be working on Unit C - Pronouns and continuing to create my flipped class units.

Supreme Court Says Police Can Take DNA Samples WASHINGTON — The police may take DNA samples from people arrested in connection with serious crimes, the Supreme Court ruled on Monday in a 5-to-4 decision. The federal government and 28 states authorize the practice, and law enforcement officials say it is a valuable tool for investigating unsolved crimes. But the court said the testing was justified by a different reason: to identify the suspect in custody. “When officers make an arrest supported by probable cause to hold for a serious offense and they bring the suspect to the station to be detained in custody,” Justice Anthony M. Justice Antonin Scalia summarized his dissent from the bench, a rare move signaling deep disagreement. But the Fourth Amendment forbids searches without reasonable suspicion to gather evidence about an unrelated crime, he said, a point the majority did not dispute. The case featured an alignment of justices that scrambled the usual ideological alliances. Monday’s ruling, Maryland v.

Wikis These four friends are going on a camping trip. They need to bring the right supplies because they're backpacking. The group needs to plan and plan well, so coordination is key. They're all computer users, so they start planning with an email. It's start with one, but then becomes a barrage. Email is not good at coordinating and organizing a group's input. The important information is scattered across everyone's inbox. There is a better way. Most wikis work the same. The buttons are really important. Here are our camping friends and here is a wiki website. Once you're finished editing, you click save and the document becomes a webpage once again, and is ready for the next person to edit it - easy! Edit - Write - and Save. Mary signs up for a wiki site and then sees the new site for the first time. Now it's John's turn. Henry visits the wiki, clicks edit and he can edit the page. Frank saves the page and realizes something awesome. But wait!

Guide to the Constitution We the People of the United States, in Order to form a more perfect Union, establish Justice, insure domestic Tranquility, provide for the common defense, promote the general Welfare, and secure the Blessings of Liberty to ourselves and our Posterity, do ordain and establish this Constitution for the United States of America. Article I: Legislative Essays » Section 1 All legislative Powers herein granted shall be vested in a Congress of the United States, which shall consist of a Senate and House of Representatives. Section 2 The House of Representatives shall be composed of Members chosen every second Year by the People of the several States, and the Electors in each State shall have the Qualifications requisite for Electors of the most numerous Branch of the State Legislature. When vacancies happen in the Representation from any State, the Executive Authority thereof shall issue Writs of Election to fill such Vacancies. Section 3 Section 4 Section 5 Section 6 Section 7 Section 8 Section 9 G°.

Project Based Learning You remember what it was like in school. IT WAS BORING! You sat in class, memorized as much as you could and tried to pass a test at the end. But is that good enough? These days school can be more interesting and effective by focusing students on work that matters. Most adults live in a world of projects. Let’s take a look at this Project Based World. Claire came out of the project looking like a rock star and she learned a lot about green products. The world needs more Claires. The answer is Project Based Learning or PBL. Here’s what I mean. Mr. After dividing the class into teams, he got them started on the project. The project teams showed off their final work to an enthusiastic audience of parents and their children at a nearby elementary school. His students practiced critical thinking, collaboration and communication. I'm Lee LeFever, and this has been Project Based Learning Explained by Common Craft.

Watching #flipclass videos: F.I.T.C.H. I made a short video for next year's students on how to get the most out of a "Flip Class" video. For their summer packet this year, they are going to be doing some "flip class-y" things... rather than just being given a packet of review problems to do, they are going to be given that packet, have videos to go along with each lesson, and then submit a reflection similar to a WSQ online. I'm hoping this will help ease my students in to next year's class. We will have six sections of Math Analysis in the fall, split between me and another teacher. You can see what I have set up for them at my student site (still under construction for next year) - kirchmathanalysis.blogspot.com You can see the letter that explains what I am having them do here. I decided to come up with an acronym (I love acronyms!) F - Focused, Serious Attitude. I - Involved in the process.

Your meat addiction is destroying the planet “Jesus,” Molly said, her own plate empty, “gimme that. You know what this costs?” She took his plate. “They gotta raise a whole animal for years and then they kill it. This isn’t vat stuff.” She forked a mouthful up and chewed.” – William Gibson, Neuromancer (1984) On Monday, August 5th, 2013, at a television studio in London in front of around 100 people, Dr. Sticky TOC engaged! For Brin, a billionaire who wears Google Glass in the promo video for the Cultured Beef project, maybe that’s true: he’s already living in a future where man can augment himself and surpass any obstacle. If they succeed, they would be part of a long and concerted effort to change the way that we, the human race, eat every single day. A growing consensus among scientists, doctors, environmentalists, and animal rights activists suggest that our current system of food — specifically meat — production is not sustainable. And yes, that sounds like science fiction, Sergey. The Hunters The hunters The Factory The factory

AISD: Social Studies - High School Austin Bar Association's Law-Related Education Program Available in 6th Six Weeks: April 23 - May 11 As you make your instructional plans for coverage of the Judicial Branch in the third six weeks period of each semester, remember to consider the opportunity to bring those from the legal profession into your classroom. This program examines the historical evolution of trial by jury and reinforces the importance of jury duty in our society. Click Here to examine the Pick Me! Recommended Resource The constitutionality of the Voting Rights Act is before the Supreme Court of the United States in Shelby v Holder, with a decision expected in June. The Center for Civic Education is a nonprofit, nonpartisan educational corporation dedicated to promoting an enlightened and responsible citizenry committed to democratic principles and actively engaged in the practice of democracy in the United States and other countries. Have you seen the latest NY Times interactive, Our Courts Imagine: In Model UN,