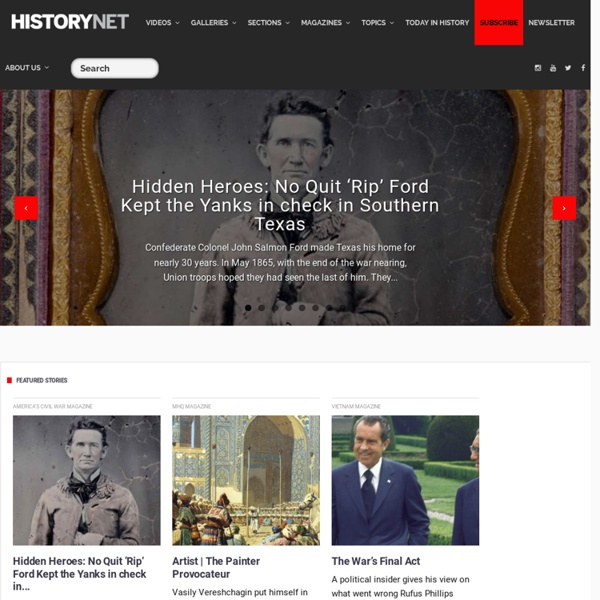 World History Timeline Embed Code Embeded for hosted site: Click the code to copy The Real History That Inspired “Star Wars” - History in the Headlines Filmmaker George Lucas may have set “Star Wars” in a galaxy far, far away, but real-life characters and events from this planet’s history inspired his creation of the sci-fi saga. Explore how history—some of it a long time ago and some much more recent—has been a powerful force in shaping one of Hollywood’s top movie franchises. When George Lucas developed the storyline for “Star Wars” and crafted his heroes and villains, he tapped into elements of theology, mysticism and mythology as well as his knowledge of classic films. And befitting a story set a “long time ago,” real-life history also played a central role in shaping the filmmaker’s space opera.

13 Mysterious Historical Monuments People who lived thousands of years before us created some striking buildings. These buildings were so extensive that scientists have been looking for centuries for answers to who, why, and most importantly, how they were built. There are all different kinds of theories, from practical to extraterrestrial. The Bright Side’s team also wanted to touch on these ancient secrets and make a list of places where ancient charm and a shade of a mystery surround them. Stonehenge, England The War of 1812 For two and a half years, Americans fought Against the British, Canadian colonists, and native nations. In the years to come, the War of 1812 would be celebrated in some places and essentially forgotten in others. But it is a war worth remembering—a struggle that threatened the existence of Canada, then divided the United States so deeply that the nation almost broke apart. Some of its battles and heroes became legendary, yet its blunders and cowards were just as prominent.

European Views of the Americas: 1493-1750 Content Includes: More than 32,000 records Coverage of European exploration and portrayals of Native American peoples Subjects include: British in America Commerce Discoveries Dutch in America French in America Great Britain—Colonies Jesuits (and other religious orders) in America Pirates Slave trade This free historical archive is a comprehensive guide to printed records about the Americas written in Europe before 1750 from European Americana: A Chronological Guide to Works Printed In Europe Relating to the Americas, 1493-1750. Try it now for free. This authoritative bibliography is well-known and respected by scholars worldwide, and a valuable index for libraries, researchers and individuals interested in European works that relate to the Americas. It was co-developed by John Alden and the Curator of European Books at The John Carter Brown Library, Dennis Landis. Titles include:

Get the History of the World in 46 Lectures, Courtesy of Columbia University When you dive into our collection of 1,300 Free Online Courses, you can begin an intellectual journey that can last for many months, if not years. The collection lets you drop into the classrooms of leading universities (like Stanford, Harvard, MIT and Oxford) and essentially audit their courses for free. You get to be a fly on the wall and soak up whatever knowledge you want. All you need is an internet connection and some free time on your hands. Today, we're featuring two courses taught by Professor Richard Bulliet at Columbia University, which will teach you the history of the world in 46 lectures.

National Screening Room Film, Video American scrapbook Dramatized incidents show various phases of life in the United States: the use of the centralized traffic control to direct the passing of two trains on a single track; the use of modern transit systems in the mass transportation of people; the enjoyment of fishing as a sport; the quiz program; modern applications of the principle of jet propulsion. Contributor: Copyright Collection (Library of Congress) - General Electric Company Date: 1954 Film, Video Manchukuo Manchuria Depicts the Japanese occupation of Manchukuo. Describes the mechanization of industry. Includes scenes showing coal and iron mines, steel mills, railroads, government buildings, new housing, native Chinese life, shops and trade, the Russian influence in Harbin, the raising of soy beans, schools, and hospitals.

History & Politics Out Loud Welcome to WyzAnt's Audio History section! Here, you can listen to famous speeches made by influential leaders of the twentieth and twenty-first centuries. We're offering original audio tapes of how JFK dealt with the Cuban Missile Crisis.