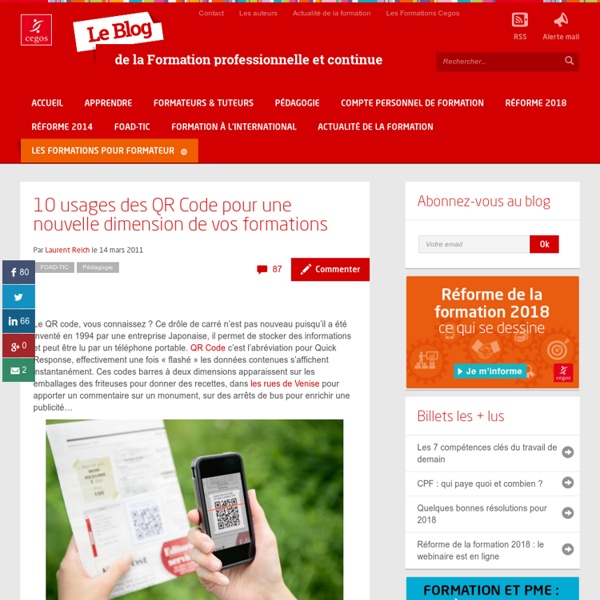 European Youth Portal Welcome to the Ideas Lab! This new initiative from the European Commission creates a space where young people across Europe can generate new ideas and solution on a wide range of topics. These ideas will then be rated by other young people online, before the ideas are sent to policy and decision-makers for evaluation, feedback, and hopefully even to be turned into reality. Over 600 young people took part in 40 national Ideas Labs events during March and April this year, and created new ideas under the four topics listed below. Mobile learning #9: A Dummies Guide to QR codes Wondering what the attractive geometric design on the left is? You’re not the only one. Until recently I had assumed that these designs were simple decoration. It turns out I’m not the only one who is unfamiliar with these so-called QR codes (Quick Response codes). A University of Bath study in 2008 found that only 13% of university students interviewed knew what QR codes are! This instantly makes me feel a lot less stupid.

5 Real Ways To Use QR Codes In Education QR codes… Disposable fad? Or useful technology? Opinions on whether QR codes are of real value is a hotly debated topic. 5 Innovative Ways to Teach Your Skills Online The Global Innovation Series is supported by BMW i, a new concept dedicated to providing mobility solutions for the urban environment. It delivers more than purpose-built electric vehicles — it delivers smart mobility services. Visit bmw-i.com or follow @BMWi on Twitter. Through projects like Khan Academy, MIT OpenCourseWare and University of the People, the Internet has made it easier for anyone to be a student.

Innovative uses of QR codes QR codes are pretty much here to stay as an accepted form of marketing, cleverly integrating the offline with the online. We previously asked whether QR codes were just a fad, but now they've reached the mainstream in such a way, it's hard to imagine a bus shelter that doesn't have at least on QR code in the corner. But QR codes are capable of so much more than just being printed on something. News Detail - e-Skills The webinar will present educational robotics and coding and will also showcase how to integrate it in the science and mathematics school curricula. A special emphasis will be placed on engaging students across cultures, linguistic and social barriers, age, learning styles and gender. Educational robotics is a methodology that involves the use of robotics to generate competences inside the regular curricula. It aims to involve students of all ages - from kindergarten to upper secondary school - in the study of STEM subjects with a new approach. It can easily find a place in traditional maths and science curricula, increasing learning motivation, communication, and the development of mathematical, scientific and digital skills. Robotics has also the potential to engage students across cultures, linguistic barriers, age, learning styles and gender.

10 maneras de utilizar los códigos QR en un salón de clases de Historia Kerry ⋅ EdTech, History ⋅ History, QR Code ⋅ Photo by DavidPitkin This post comes with a huge acknowledgement to several people in my PLN – who, through constant tweeting about QR Codes, have forced me to take a look at their worth. Four Ways QR Codes Could Revolutionize Education - Education Quick Response (QR) codes are beginning to pop up on city buses, in museum exhibits, and just about anywhere people need easy access to information. But we're only beginning to scratch the surface of how they can be used to improve the formal educational experience. As the number of Americans, particularly students, with smartphones continues to grow, here are four ways QR codes could revolutionize learning in the next decade. 1. Digital portfolios for students.

ITworldEdu 2011 Award: Rewarding best educational technology solutions developed and applied in schools and companies Within the ITworldEdu 2011, the fourth edition of the Great Meeting Point towards Excellence in Educational Technology, the ITworldEdu Award is announced aiming the next goals : Recognizing the growing effort of the educational field in the creation and assessment of new digital resources.Recognizing the technological and teaching entrepreneurship initiatives and proposals for educational innovation in education by the demand sector.Stimulating and informing technological suppliers, as well as the entire education sector, about the high-quality, creative and innovative tools that really work in the classroom, enabling personalized learning and facilitating teaching and managing. Thus, the ITworldEdu 2011 Award, besides offering recognition to teachers and schools, starts a new category aimed at the business. Deadline: September, 30th

101 Uses For Quick Response (QR) Codes: Creating Audience Engagement With The Next Killer US App - a Blog by GREAT! CEO & IDEAologist Dan Smigrod [@smigrod, @uSCANme] - That's GREAT! June 12, 2010 • Atlanta, GA USA – 2010 is the year of quick response (QR) code in the United States. By December 31, 2010, a major broadcast or cable TV network and one or more national brands – or Facebook – will do for QR codes in the U.S. what American Idol did for mobile texting. If you work at a major broadcast or cable network or major U.S. consumer brand and are first (in a big, useful, powerful way), you’ll also benefit from a massive amount of traditional consumer and trade media coverage; social media and word-of-mouth buzz. Wedding Bride Meets Quick Response (QR) Scan Code • Scan the code to see video shout-outs for Fashion & Glamour Photographer Dan Smigrod • Text SCAN to 43588 for a free scanner app This means you need to get started – today!

52 Of The Best Apps For Your Classroom In 2015 52 Of The Best Apps For Your Classroom In 2015 by TeachThought Staff This post was sponsored by CK-12, a non-profit foundation that creates and aggregates high quality curated STEM content. What are the best apps for your classroom? QR Codes in Books - Do They Work? QR codes often get a bad rap these days. The ugly little boxes appear everywhere and to many, they seem to be a waste of time and space. But the reality of QR codes is like any tool - the value is determined by how it’s used. When used effectively, QR codes bridge online and offline worlds by making it easier to use a mobile phone to visit a webpage, for example. This three-minute video explains QR codes: Email readers can watch the video here.

50 QR code resources for the classroom As mobile learning and technology is more readily integrated within classroom settings, QR codes can be used as an interesting method to capture a student's attention and make lesson material more interactive. Quick response codes, also known as 'QR' codes, are simple, scannable images that are a form of barcode. By scanning a QR code image through a mobile device, information can be accessed including text, links, bookmarks and email addresses. In the classroom, QR codes can be used in a variety of ways -- from conducting treasure hunts to creating modern CVs.