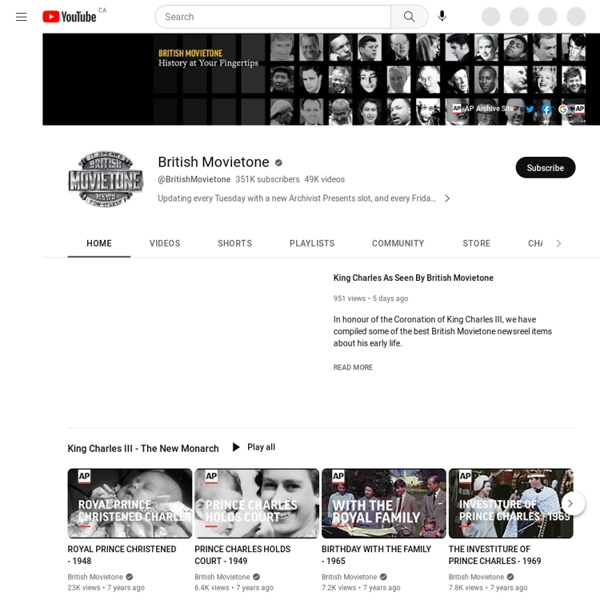 British Movietone is arguably the world's greatest newsreel archive, spanning the period 1895 to 1986. Discover British Movietone’s newsreel archive, which contains many of the world’s enduring images and is rich in coverage of news events, celebrities, sports, music, social history, science, lifestyle and quirky, via this channel. British Movietone also offers a weekly series called 'The Archivist Presents' where a treasure from the archive is shared by our archivist Jenny and ‘Movietone Moments’, a weekly selection of topical stories providing context to events in the news and marking anniversaries and birthdays.

Primary Source Sets Digital Public Library of America (DPLA) Primary Source Sets are designed to help students develop critical thinking skills by exploring topics in history, literature, and culture through primary sources. Drawing online materials from libraries, archives, and museums across the United States, the sets use letters, photographs, posters, oral histories, video clips, sheet music, and more. Each set includes a topic overview, ten to fifteen primary sources, links to related resources, and a teaching guide. Women's March Is The Biggest Protest In US History As An Estimated 2.9 Million March Millions of Americans have taken to the streets from New York to Los Angeles and everywhere in between as the Women’s Marches on Washington is estimated to be the biggest one-day protest in US history. UConn professor Jeremy Pressman is keeping a running total of crowd estimates across the United States in a Google document. An estimated 60,000 people marched in Atlanta. 250,000 are marching in Chicago.

The Industrial Revolution and the changing face of Britain An exhibition at the Barber Institute of Fine Arts (2008-9) During the late 18th and early 19th centuries, Britain experienced change in all aspects of life, as a result of the Industrial Revolution. Scientific advances and technological innovations brought growth in agricultural and industrial production, economic expansion and changes in living conditions, while at the same time there was a new sense of national identity and civic pride.

Ancestral Lines 2 clicks please Evolutionary biologists use a cladogram, the treelike diagram of evolutionary branches or clades, to organize species into lines of evolutionary descent across time. Biologists use three types of evidence to deduce evolutionary connections: genetics, morphology, and geologic dating. (Behavior, normally a key part of evolutionary studies, can only be inferred in extinct species — for example, by examining the ecology in which the species flourished and the species adaptations for eating and locomotion.) Moving Image Archive Anime (/ˈænəˌmeɪ/) (Japanese: アニメ) is a style of hand-drawn and computer animation originating in, and commonly associated with, Japan. The word anime is the Japanese term for animation, which means all forms of animated media. Outside Japan, anime refers specifically to animation from Japan or as a Japanese-disseminated animation style often characterized by colorful graphics, vibrant characters and fantastical themes. The culturally abstract approach to the word's meaning may open...

Women’s March Los Angeles draws estimated 750K: ‘This is what we do as Americans’ Fired up by what they call an election cycle that left them insulted and their rights threatened, hundreds of thousands of women — and the men who support them — gathered in downtown Los Angeles on Saturday as part of a nationwide act of solidarity to send a message to President Donald Trump’s administration. An estimated 750,000 people brought that message to L.A.’s packed streets in a loud but peaceful stand for equal rights and a defense of civil liberties. • Live Coverage: Women’s March Los Angeles and other protests On the half-mile route from Pershing Square to City Hall, they held up signs, some with graphic images and language directed at Trump, who took the office on Friday. Others read “Love not hate makes America great!”

Map of London Social and Functional Analysis 1943 [Updated] This map of London districts, was intended to be used as a grand “masterplan” of how a post-WW2 London could look. Each district appears as a simplified “blob” with rounded edges – many districts are simple ovals. Specific single “University”, “Government”, “Press” and “Law” districts are all defined. Blue dots mark out the main shopping streets, with town halls marked with larger red dots.

Photo: Stefan Ruenzel Crowds of incontestable size spelled out "Resist!!" with their bodies this morning while sitting and standing on the sands of Ocean Beach. The message, aimed at what many perceive to be an increasingly authoritarian American government, was organized on Facebook by Brad Newsham of Oakland who began creating such visual events in 2006 and commissioned a helicopter photographer for $1,000 an hour for the event. "I'm 65 years old, I should tell you I got a new hip since the last one," Newsham told SFist by phone as he was leaving the Ocean Beach adjacent Beach Chalet restaurant.