Life in Elizabethan England: Maps - Europe. London-large.gif (GIF Image, 1500 × 1071 pixels) - Scaled (68%) Sexycodicology: Amazing manuscript in the shape... Hidden secrets revealed in 1491 world map that may have guided Columbus. A map of the world produced in 1491 by Henricus Martellus has been subjected to multispectral imaging, which has revealed hidden details on the map not previously visible, including numerous Latin descriptions of regions and people. 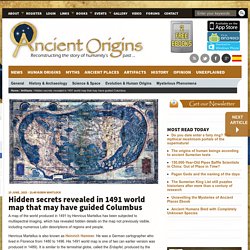 Henricus Martellus is also known as Heinrich Hammer. He was a German cartographer who lived in Florence from 1480 to 1496. His 1491 world map is one of two (an earlier version was produced in 1489). General Braddock’s Defeat on the Monongahela in 1755 Part 2. An account of General Braddock’s expedition to Fort Duquesne in 1755 in 15 parts: Part II: The deterioration in relations between Britain and France in America The French & Indians launch their attack on the British & American troops; Braddock falls shot while George Washington attempts to assist him.Click here or image to buy a print The appointment of Robert Dinwiddie as Lieutenant Governor of Virginia: On 4th July 1751 the new Lieutenant Governor of Virginia was appointed, Robert Dinwiddie. 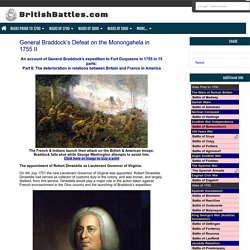 Dinwiddie had served as collector of customs duty in the colony, and was known, and largely disliked, from this service. Dinwiddie would play a major role in the action taken against French encroachment in the Ohio country and the launching of Braddock’s expedition. Robert Dinwiddie: portrait by an unknown artist Dinwiddie was also a member of the Ohio Company. The British North American colonies were an extraordinary muddle of conflicting interests.

British strategy in North America: Family Tree King Alfred to Elizabeth II. Historical Timeline. Merchant Networks Timelines0. 1629: In 1629, many Englishmen with vehement Puritan views backed the Providence Island Company, to be theirs exclusively, and in 1629 the Earl of Warwick, Sir Nathaniel Rich, Lord Saye and Sele, and another puritan, the third Earl of Lincoln (Thomas Clinton, 1571-1619), patronized the Massachusetts Bay Company. 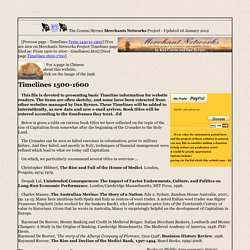 (Third Earl Lincoln: Who's Who /Shakespeare, p. 152. GEC, Peerage, Lincoln, p. 695, Clinton, p. 318.) So, American puritan ports siphoned off religious exiles (and later, undesirables). Waking Times ~ The 500 Year Old Map that Shatters the Official History of the Human Race. This post goes right along with some themes I’ve shared lately, including: other mysterious explanations for climate change; how this planet is fully capable of reorganizing her surface area such that ley lines co-opted by Masonic Temples, wifi towers and other mis-uses of their power will shift, creating new flows and intersections of power where people have healed the land; embracing The Great Uncertainty (also known as The Mystery), because truly, we do not know all the answers; my contention that squelching research in Antarctica was one of the real reasons for the government shut down charade of 2013; and an old theme about humanity having experienced a devolution rather than an evolution. 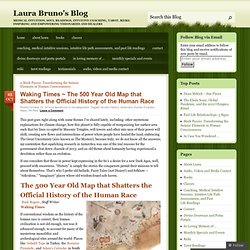 If one considers that those in power kept expressing in the 60’s a desire for a new Dark Ages, well, proceed with awareness. “History” is simply the stories the conquerors permit their minions to tell about themselves. That’s why I prefer old ballads, Faery Tales (not Disney!) Timelines of Asia TOC:  India, China, Japan. Ancient Philosophy Timeline.

Old Maps Online. 16 maps that Americans don't like to talk about - Vox. If there was a single moment when the US became a global power, it was the war with Spain. 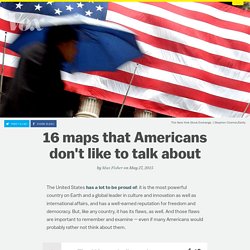 The Spanish Empire had been crumbling for a century, and there was a ferocious debate within the US over whether America should replace it as a European-style imperial power, or if as a democracy the US should instead liberate peoples from imperialism. The debate centered on Cuba: pro-imperialists wanted to purchase or annex it from Spain (pre-1861, the plan was to turn it into a new slave state); anti-imperialists wanted to support Cuban independence. In 1898, Cuban activists launched a war of independence from Spain, and the US intervened on their side. Historical European martial arts. Historical European martial arts (HEMA) refers to martial arts of European origin, particularly using arts formerly practised, but having since died out or evolved into very different forms. 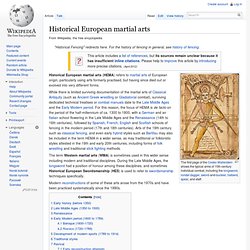 While there is limited surviving documentation of the martial arts of Classical Antiquity (such as Ancient Greek wrestling or Gladiatorial combat), surviving dedicated technical treatises or combat manuals date to the Late Middle Ages and the Early Modern period. For this reason, the focus of HEMA is de facto on the period of the half-millennium of ca. 1300 to 1800, with a German and an Italian school flowering in the Late Middle Ages and the Renaissance (14th to 16th centuries), followed by Spanish, French, English and Scottish schools of fencing in the modern period (17th and 18th centuries). The term Western martial arts (WMA) is sometimes used in this wider sense including modern and traditional disciplines. Early history (before 1350)[edit] Fol. 4v of the I.33 Renaissance[edit]