History of Psychology Simulation, Online Psychology Laboratory. 1500-1600: Renaissance and Reformation. Timeline: Solitary Confinement in U.S. Prisons. Smith.cogpsychhistory. 01 history. Marital duels (Female Single Combat Club) Trial by combat (or judicial duel, judicial combat) was a method of Germanic law to settle accusations in the absence of witnesses or a confession in which two parties in dispute fought in single combat; the winner of the fight was proclaimed to be right. 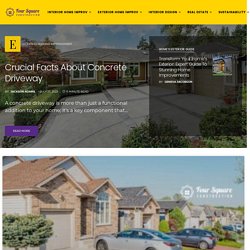 In essence, it was a judicially sanctioned duel. Ancient Classical Roots of Psychology. John W. 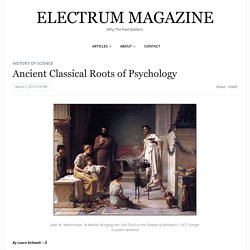 Waterhouse, “A Mother Bringing Her Sick Child to the Temple of Asklepios”, 1877 (Image in public domain) By Laura Rehwalt – How old is the idea of psychiatry and how long has psychotherapy been practiced? Most likely the Greeks and Romans had an inkling, even if these two words are fairly modern. And given that Plato and Galen had a few things to say as well, it should not surprise us that doctors have known for thousands of years that mind and body are connected. Some forms of mental health therapy and psychological diagnoses can be traced back to antiquity. Roman Empire Psychology. History. Narrative Psychology: Wilhelm Wundt (Theorists) Sensation: Thresholds and Psychophysics. Sensory Thresholds and Psychophysics Sensation occurs when sensory areas in the cerebral cortex receive nerve impulses, usually when body sensors such as the touch receptors of the skin are stimulated. 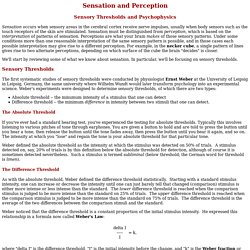 We'll start by reviewing some of what we know about sensation. Sensory Thresholds The Absolute Threshold If you've ever had a standard hearing test, you've experienced the testing for absolute thresholds. Weber - Fechner Law. The Weber-Fechner law states that the amount of change needed for sensory detection to occur increases with the initial intensity of stimulus, and is proportional to it. 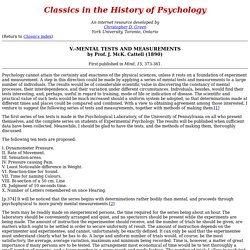 Green York University, Toronto, Ontario (Return to Classics index) The History of Psychology. This is an e-text about the historical and philosophical background of Psychology. 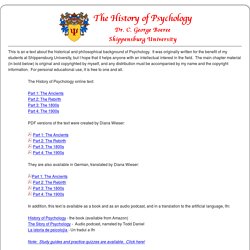 It was originally written for the benefit of my students at Shippensburg University, but I hope that it helps anyone with an intellectual interest in the field. The material is original and copyrighted by myself, and any distribution must be accompanied by my name and the copyright information. For personal educational use, it is free to one and all. The History of Psychology. Functionalism Functionalism, an early school of psychology, focuses on the acts and functions of the mind rather than its internal contents. 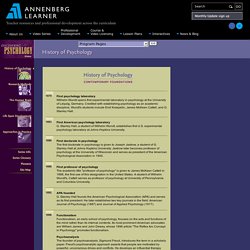 Its most prominent American advocates are William James and John Dewey, whose 1896 article "The Reflex Arc Concept in Psychology" promotes functionalism. Psychoanalysis The founder of psychoanalysis, Sigmund Freud, introduces the term in a scholarly paper. Freud's psychoanalytic approach asserts that people are motivated by powerful, unconscious drives and conflicts. 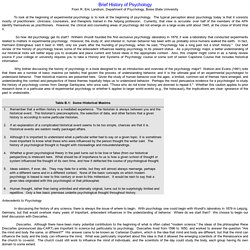 Eric Landrum, Department of Psychology, Boise State University. Fourforces.pdf. Dangerous Times: When Paranoids Do Politics. Writing in European Neurology, the historian Juerg Kesselring says that Stalin met all the clinical standards for paranoia: Excessive sensitivity to rejection; bearing on slights, suspicion; tendency to distort experiences; neutral or friendly actions of others misinterpreted as hostile or contemptuous; unjustified suspicions regarding sexual fidelity of spouse or sexual partner; contentious and continued insistence on their own rights; inflated self-esteem and frequent, excessive self-absorption. 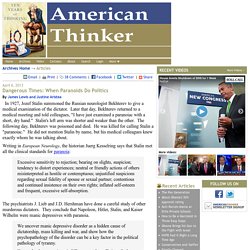 The psychiatrists J. Lieb and J.D. Hershman have done a careful study of other murderous dictators. They conclude that Napoleon, Hitler, Stalin, and Kaiser Wilhelm were manic depressives with paranoia. Which brings me to some truly crazy folks in Europe today. Grillo likes to perform Hitler-like rants (see YouTube). Germany's Der Spiegel has called Grillo "the most dangerous man in Europe. " Paranoid personalities may act very rationally outside their delusional beliefs. What about Beppe Grillo? Resources. Origins Timeline. History of Psychology 387 BC to Present at AllPsych Online. Human Intelligence: Map. Interactive Map To download this map image in its entirety, click here. 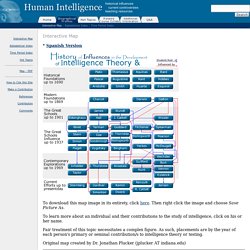 Then right click the image and choose Save Picture As. To learn more about an individual and their contributions to the study of intelligence, click on his or her name. Fair treatment of this topic necessitates a complex figure. As such, placements are by the year of each person's primary or seminal contribution/s to intelligence theory or testing.

Original map created by Dr. Home | Interactive Map | Alphabetic Index | Time Period Index Hot Topics | Map - PDF | References | Contributors | Comments For further information please contact Content questions: Dr. Classics in the History of Psychology. The History and Bases of Psychology. The History and Bases of Psychology The goal of this chapter is provide an overall view, a "big picture" framework, for the introductory level study of psychology. Such a "big picture" framework is not only beneficial but also very necessary owing to the diversity of scientific interests within Psychology. Otherwise, the width of psychology's scope might lead you to utter, as an old saying goes, you can't see the forest for the trees. Psychology has grown dramatically in its range of interests since its founding, incorporating the natural and social sciences as well as the liberal arts and humanities.

Because of the great breadth and depth of psychology, this text, as any other Introductory Psychology text, will not be able to do delve in-depth in all aspects of the field. Every topic covered will be simplified and some topics will, unfortunately, be omitted. Modern Psychology Timeline of Events. Timeline: The development of psychology.

Wilhelm Wundt founds the first experimental psychology lab in Leipzig, Germany, marking the moment psychology becomes its own field of study. Sigmund Freud, founder of psychoanalysis, begins treating patients in Vienna, Austria. Freud publishes The Interpretation of Dreams. The British Psychological Society is formed. Ivan Pavlov trains a dog to salivate on hearing the sound of a bell. Epoch 10 - this is sweet! Exploring psychology: Activity 1: Using the timeline. This activity requires you to use the EPoCH timeline to find the answers to the questions listed below. Remember that as well as scrolling from left to right (i.e. backwards and forwards in time) you can also scroll up and down the timeline – revealing the full listing of psychologists and researchers included in the EPoCH resource.

Hint: The EPoCH resource presents information about individual researchers, their contexts and methods as well as details about psychological topics and perspectives. Psychology History. History of Abnormal Psychology. As far as historians can ascertain, Paleolithic people saw no distinction between medicine, magic, and religion.Archeologists have uncovered skulls with holes drilled in them dating back as far as 8,000 B.C.Researchers have determined that, for some, bone healed near these holes indicating that the procedure may have been surgical and that the person survived. Many theories have been developed as a means to explain the purpose behind this surgery, called trephining.Some anthropologists theorize that the holes may have been drilled into the skull as a means of releasing “evil spirits” that were trapped inside the head causing abnormal behavior.Other anthropologists believe that trephining was used to treat medical problems (e.g., removal of a tumor).However, the true purpose for trephining during the Stone Age remains unknown.Trephining continues to be practiced today among certain African tribes for the relief of head wounds.