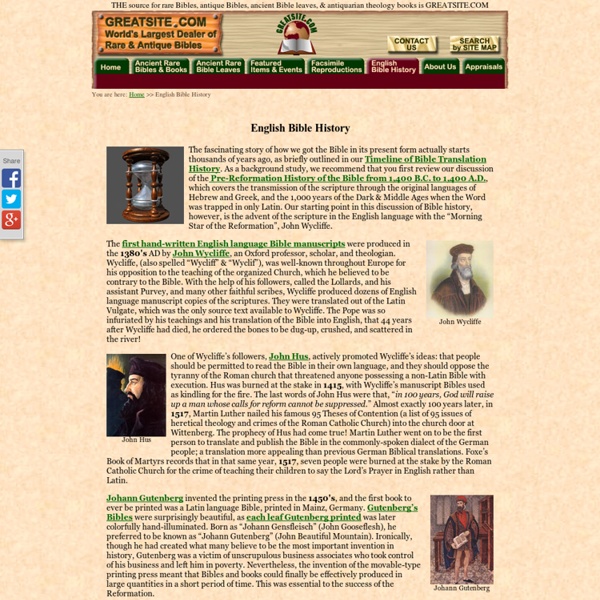 The fascinating story of how we got the Bible in its present form actually starts thousands of years ago, as briefly outlined in our Timeline of Bible Translation History. As a background study, we recommend that you first review our discussion of the Pre-Reformation History of the Bible from 1,400 B.C. to 1,400 A.D., which covers the transmission of the scripture through the original languages of Hebrew and Greek, and the 1,000 years of the Dark & Middle Ages when the Word was trapped in only Latin. Our starting point in this discussion of Bible history, however, is the advent of the scripture in the English language with the “Morning Star of the Reformation”, John Wycliffe. John Wycliffe The first hand-written English language Bible manuscripts were produced in the 1380's AD by John Wycliffe, an Oxford professor, scholar, and theologian. John Hus Johann Gutenberg Thomas Linacre John Colet Erasmus William Tyndale Martin Luther Myles Coverdale John Rogers Thomas Cranmer King Henry VIII Queen Mary Related:  British • Bible Study 1

Map of London Social and Functional Analysis 1943 | Mapping London [Updated] This map of London districts, was intended to be used as a grand “masterplan” of how a post-WW2 London could look. Each district appears as a simplified “blob” with rounded edges – many districts are simple ovals. Specific single “University”, “Government”, “Press” and “Law” districts are all defined. Blue dots mark out the main shopping streets, with town halls marked with larger red dots. The accompanying text reads: A simplification of the communities & open space survey showing the existing main elements of London. Thankfully London has not ended up as ordered and prescribed – and obsolescent – as this map suggests. [Update – Thanks to Andrea Marchesetti for mentioning the below related map, from around the same time and with the same general idea, except with more precise boundaries drawn around the communities.] See more maps featured on Mapping London

The Parables of Jesus: Intro and List The parables of Jesus are found in the three synoptic gospels (Matthew, Mark, and Luke) and the Gospel of Thomas. We will be studying 27 of the parables found in these texts. In our examination of these stories, we'll consider their literary form and placement within each gospel and the ways scholars of the New Testament and early Christianity have analyzed these texts. New Testament scholars believe that Mark's gospel was used as a source by both Matthew and Luke, so their versions of each parable can be usefully compared to the Markan version to see their editing [or redaction] of the Markan source (though it also possible that they had access to another source in addition to Mark). Their activities of preaching, studying, worshipping, and learning together radically shaped the ways the parables were heard and told. Mark 4:1–20, Matthew 13:3–23, Luke 8:5–15, Thomas 9 Mark 4:26-29 [unique to Mark] Mark 4:30-32, Matthew 13:31-32, Luke 13:18-19, Thomas 20 Matthew 13:24-30, Thomas 57 17b.

The History of the Jet Engine - Sir Frank Whittle - Hans Von Ohain By Mary Bellis Dr. Hans von Ohain and Sir Frank Whittle are both recognized as being the co-inventors of the jet engine. Each worked separately and knew nothing of the other's work. Sir Frank Whittle was an English aviation engineer and pilot, the son of a mechanic, Frank Whittle joined the Royal Air Force or RAF as an apprentice. With private financial support, he began construction of his first engine in 1935. The firm of Power Jets Ltd., with which Whittle was associated, received a contract for a Whittle engine, known as the W1, on July 7, 1939. born: June 1, 1907, Coventry, Warwickshire, England died: Aug. 8, 1996, Columbia, Md., U.S. Doctor Hans Von Ohain was a German airplane designer who invented an operational jet engine. Hans Von Ohain joined Ernst Heinkel in 1936 and continued with the development of his concepts of jet propulsion. Hans Von Ohain developed a second improved jet engine, the He S.8A, which was first flown on April 2, 1941. Photo Courtesy U.S.

Who Were the Religious Leaders of Jesus's Day? The Priesthood In first century Palestine there was no separation between church and state. The priests at the temple in Jerusalem not only officiated over the religious life of the Jews, they were also rulers and judges. Herod, who was himself a pawn of Rome, had his own pawns installed in the Jewish priesthood. By the first century the election of the High Priest was more political than religious. “Then many of the Jews who had come to Mary, and had seen the things Jesus did, believed in Him. Josephus recorded that the priesthood went so far as to authorize a daily sacrifice for Caesar in the temple. The priesthood lived in luxury well beyond that of the average man. “…impressive archeological remains of their Jerusalem residences show how elegant their life style had become. The priests lived lavish lifestyles while the average Jewish peasant struggled to survive. The Pharisees The Pharisees rose to prominence in what scholars call the second temple period. The Sadducees The Essenes

Lady Jane Grey and Lord Guilford Dudley Executions 1554 Lady Jane Grey and her husband, Lord Guildford Dudley, were executed on 12 February 1554 at the Tower of London. The account below was found in the anonymous Chronicle of Queen Jane and of Two Years of Queen Mary. The decision to execute her cousin was not easy for Queen Mary I. His [Guildford’s] carcase thrown into a cart, and his head in a cloth, he was brought to the chapel within the Tower, where the Lady Jane, whose lodging was in Partidge’s house, did see his dead carcase taken out of the cart, as well as she did see him before alive on going to his death – a sight to her no less than death. Read More English History Topics The Coronation of Lady Jane Grey, 1553 This account of Jane Grey's coronation was written by Henry Machyn, a London undertaker. February 28, 2015 In "Tudor" Lady Catherine Grey Facts & Information Biography ' I have sent you, good sister Catherine, a book, which although it be not outwardly trimmed with gold, yet inwardly it is more worthy than precious stones.

Year of the Eucharist, encyclical of John Paul II God's most precious gift to His Church: Jesus is really present in the consecrated Host On Thursday, June 10, 2004, when celebrating Corpus Christi with the Diocese of Rome, Pope John Paul II announced that in October, 2004, coinciding with the International Eucharistic Congress of Guadalajara, Mexico, a special Year of the Eucharist will begin, which will end in October 2005 with the ordinary assembly of the Synod of Bishops, whose them will be “The Eucharist: Source and Summit of the Life and Mission of the Church.” The Eucharist is a great mystery — Jesus is really present, body and blood, soul and divinity, in the consecrated Host — but it is also God's greatest gift to mankind, since in it, Christ becomes intimately united to us, by becoming the Bread of Life. On April 17, 2003 — Holy Thursday — Pope John Paul II devoted a whole encyclical letter to the Eucharist, to remind the faithful about the importance of this sacrament, and the right dispositions to receive it.

Kitchener: The most famous pointing finger Image copyright Other A recruitment poster of the stern-eyed Lord Kitchener has become a defining image of World War One. A clever illustrator's psychological trickery has spawned a thousand imitations, writes Adam Eley. It is perhaps history's most famous pointing finger. The image of British war minister Lord Kitchener's index finger unsettlingly aimed at the viewer remains immediately recognisable 100 years after its design. Most people assume this image owes its fame to a government recruiting campaign during World War One. But while an estimated 5.7 million official posters printed in the UK from 1914-18, as few as 10,000 copies of this particular image were made. It was initially intended only as a front cover design for the London Opinion magazine on 5 September 1914, created by professional illustrator Alfred Leete, supposedly in a single day. The slogan was then slightly tweaked to simply "Wants You" and the image was privately produced as a poster shortly afterwards.

Textual criticism - what is it? Question: "Textual criticism - what is it?" Answer: Simply stated, textual criticism is a method used to determine what the original manuscripts of the Bible said. The original manuscripts of the Bible are either lost, hidden, or no longer in existence. What we do have is tens of thousands of copies of the original manuscripts dating from the 1st to the 15th centuries A.D. (for the New Testament) and dating from the 4th century B.C. to the 15th century A.D. There are three primary methods to textual criticism. A second method is known as the Majority Text. The third method is known as the critical or eclectic method. Which method is most accurate? However, in the eastern Christian world, Greek continued to be the dominant language of the church for over 1000 more years. How does the critical / eclectic method work in practice? No matter what method of textual criticism you believe is correct, this is an issue that should be discussed with grace, respect, and kindness. Related Topics:

John Dee John Dee was an eminent Elizabethan mathematician and astrologer. His studies into the Occult took him abroad on many occasions, and this has added weight to the suspicion that he was also a secret government agent (code name 007). He was employed teaching navigation to Naval Captains for 30 years, but is most well known for his active involvement in occult thought and practice.Dee was born near London on the 13th of July 1527. John Dee, seatedIn 1542 at the age of 15, Dee entered Cambridge College and graduated in 1544 with a BA. During the reign of Queen Mary Tudor (Bloody Mary), Dee was arrested and accused of attempting to kill her with sorcery. Queen Elizabeth succeeded her sister in 1558, and Dee found a new era of prosperity, he was even commissioned to predict the best astrological time for her coronation. He began his experiments in trying to contact discarnate entities in 1581, mainly fuelled by strange dreams, feelings and mysterious noises within his home.

Mark 14 Jesus' anointing[edit] Mark states that the Passover was two days away. If the Passover was on Friday (Good Friday) then this happened on Wednesday and is celebrated by Christians as Holy Wednesday. Mark says that Jesus was in Bethany relaxing at the home of Simon the Leper, who has not appeared in the Gospel until now. Simon's relationship to Jesus is not explored, but they must have been friends as this seems a social visit. Mark also states that the chief priests were looking for a "sly" way to arrest Jesus. An unnamed woman, who has a very expensive jar of perfume, made out of "pure nard" according to Mark, comes and breaks the alabaster jar the perfume is in and pours it on Jesus' head. Why are you bothering her? And so it has been. This begins the final section of Mark that probably originally ended at Mark 16:8 with the two Mary's going to anoint Jesus' dead body and finding that they can not because he had risen from the dead, an anointing by God. The Last Supper[edit]