Quality Street Gang - Wikipedia, the free encyclopedia - CometBi. The city where gangs never sleep - Manchester Evening News - Com. "SOME commentators have speculated that the United Kingdom stands on the brink of a US-style gang culture. 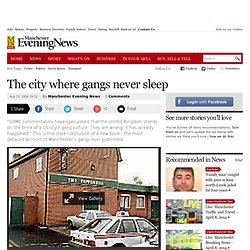 They are wrong; it has already happened. " Flood's children win will payout - Manchester Evening News - Com. A SON and daughter of Manchester gangster Dougie Flood can expect to get a fairer share of his £14m fortune after a bitter court battle. 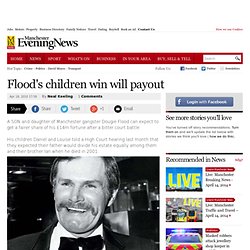 His children Daniel and Louise told a High Court hearing last month that they expected their father would divide his estate equally among them and their brother Ian when he died in 2001. In his will Douglas Firkin-Flood, known locally as Dougie Flood, set up a trust fund with his assets - including the 140-bed Bredbury Hall Hotel in Stockport, and Quaffers nightclub - leaving 60 per cent to Ian, 30 per cent to Daniel, and ten per cent to Louise. Daniel, 45, and Louise, 39, claimed that when the three of them were told of the will's contents they agreed that, to prevent a family row and court battle, they would share the assets equally. Ian, 44, claimed this was a fabrication and there was never an agreement. An independent solicitor will now be appointed with others to be trustees. "Sadly, in a case such as this there can be no real winners.

Dougie was no gangster - Manchester Evening News - CometBird. THE son of a multi-millionaire hotelier has defended his late father over claims he was a gangster who battled the Krays. 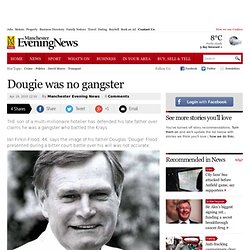 Ian Firkin-Flood, 44, says the image of his father Douglas 'Dougie' Flood presented during a bitter court battle over his will was not accurate. Dougie died in 2001 leaving a £14m fortune from his hotel and leisure business. Stan Bowles explains the problem with modern football. To sit with Stan Bowles and listen to riotous tales of fun and insurrection in the 70s is to be reminded that, for all its modern excesses, football fundamentally has always been a playground of the ego. 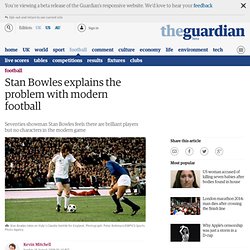 This, after all, was a man for whom the round ball might have been invented as his personal plaything so brilliant was he, a footballer Denis Law once described as "100% talent". Yet he entered into countless battles of the will, won a few, lost more and ultimately squandered his gifts. It is a crime he played only five times for England – but some of the wounds were self-inflicted. He delighted the rest of us – except maybe those fans at Roker Park who went berserk the day in 1973 that he and Tony Hazell knocked over the FA Cup Sunderland had won four days before and had placed with pride on a table by the pitch before their final league game, against QPR.

'Untouchable' underworld leader murdered. One of Britain's most notorious gangland figures has been murdered just days before a documentary is aired in which he bragged of his 'untouchable' position in the underworld. 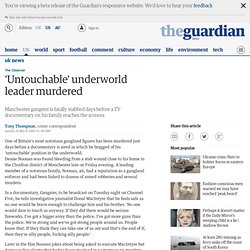 Dessie Noonan was found bleeding from a stab wound close to his home in the Chorlton district of Manchester late on Friday evening. A leading member of a notorious family, Noonan, 46, had a reputation as a gangland enforcer and had been linked to dozens of armed robberies and several murders. In a documentary, Gangster, to be broadcast on Tuesday night on Channel Five, he tells investigative journalist Donal MacIntyre that he feels safe as no one would be brave enough to challenge him and his brother. 'No one would dare to touch us anyway. If they did there would be serious fireworks. Later in the film Noonan jokes about being asked to execute MacIntyre but denies police claims that he has been involved in as many as 25 murders. Dessie Noonan had viewed the programme just a few hours before he died. Day the gangsters buried the hatchet. By MICHAEL SEAMARK and DAVID WILLIAMS Last updated at 09:14 01 March 2007 Had they met on the streets of London in their 1960s heyday, the result would undoubtedly have been violence at its most extreme. 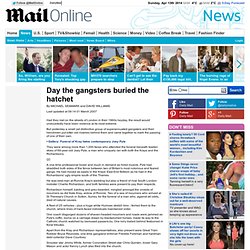 But yesterday a small yet distinctive group of superannuated gangsters and their henchmen put bitter old rivalries behind them and came together to mark the passing of one of their own. They were among more than 1,000 faces who attended the funeral beneath leaden skies of 69-year-old Joey Pyle, a man who uniquely ran with both the Krays and the Richardsons. A one-time professional boxer and much in demand as hired muscle, Pyle had straddled both sides of the fence between two of Britain's most notorious and feared gangs. He was best man at Ronnie Kray's wedding but also a friend of rival South London mobster Charlie Richardson, and both families were present to pay their respects. Born in the East End, he met the notorious Kray twins when they were all young boxers. Joey Pyle: A force in London underworld (From Surrey Comet) - Co. Joey Pyle: A force in London underworld 3:03pm Thursday 15th March 2007 in News Just after 10am, on the last day of February, a dark stretch limousine glided down Lower Morden Lane, the first sign that something extraordinary was happening in the quiet back roads near Morden Park, writes Alexander Carnwath. 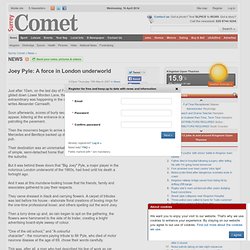 Soon afterwards, scores of burly security men in dark suits began to appear, loitering at the entrance to a small community car park and patrolling the pavement. Then the mourners began to arrive in their hundreds, their dark Mercedes and Bentleys backed up down the road and past the local pub. Star send off for Joey Pyle. Gangland days revisited by window cleaner's murder - Crime, UK -

After the rowdy entertainment the 36-year-old window cleaner went to the home of one of the fighters with friends and guests to celebrate. 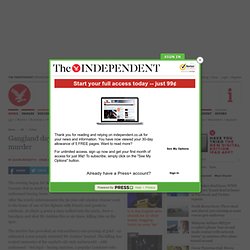 At about 4.30am a man walked into the party, drew a handgun and shot Mr Jenkins five or six times, killing him on the spot. The murder has provoked an extraordinary out-pouring of grief - an estimated 2,000 people attended Mr Jenkins' funeral. The Krays - The Geordie Connection - CometBird. British drug kingpin, Curtis 'Cocky' Warren, found guilty of smu.