Who gains most from this salacious tale? The real reason Iain Duncan Smith resigned and what it means for George Osborne and David Cameron. It is quite true that almost every Budget in recent years has been seen tension between Mr Duncan Smith and senior colleagues, and George Osborne in particular. 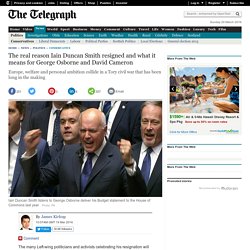 Mr Duncan Smith's explicit reference to the Chancellor in his letter denotes what was one of the most strained relationships in the Cabinet, both institutionally and personally. The Chancellor and his Treasury have been the driving force behind cutting welfare spending, for reasons both economic and political. Seeking to cut overall spending significantly while protecting large items like the NHS and the state pension meant there was no alternative but to cut benefits.

But Mr Osborne has often sought to make political virtue of that economic necessity, portraying cuts as the work of a party that supports workers and punishes shirkers. That rhetoric has long angered Mr Duncan Smith, who seeks a more compassionate attitude towards claimants and saw the Chancellor's stance on welfare as cynical and callous. 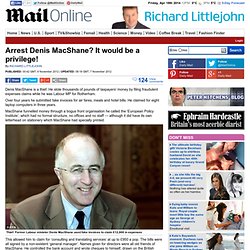 He stole thousands of pounds of taxpayers’ money by filing fraudulent expenses claims while he was Labour MP for Rotherham. Over four years he submitted fake invoices for air fares, meals and hotel bills. He claimed for eight laptop computers in three years. MacShane funnelled money through a bogus front organisation he called the ‘European Policy Institute’, which had no formal structure, no offices and no staff — although it did have its own letterhead on stationery which MacShane had specially printed. True Brits! Meet the new breed of Tory MPs who defied their leader over the EU (and most have had jobs in the real world) By Quentin Letts Published: 00:14 GMT, 2 November 2012 | Updated: 00:17 GMT, 2 November 2012 There is a genre of action films (eg Kelly’s Heroes) in which desperadoes from various unlikely occupations are moulded into a formidable fighting force. 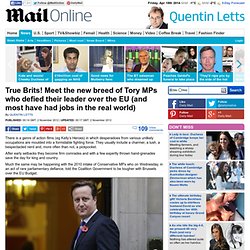 They usually include a charmer, a lush, a bespectacled nerd and, more often than not, a pickpocket. After early setbacks they become firm comrades and with a few expertly thrown hand-grenades save the day for king and country. Much the same may be happening with the 2010 intake of Conservative MPs who on Wednesday, in an act of rare parliamentary defiance, told the Coalition Government to be tougher with Brussels over the EU Budget. Wounded: David Cameron's government was defeated on Wednesday by Tory rebels siding with Labour to demand he negotiate a cut in the EU budget Half the 53 Tories who rebelled were ‘newbies’ — ie MPs who only entered the Commons at the last general election. Computer-geeky: Rebel leader Mark Reckless UnWhippable? John Prescott: How on earth is this dreadful, incompetent philanderer still thriving? Newsnight: Jeremy Paxman 'sacrifices' junior minister Chloe Smith over 'coward' Osborne's Budget U-turn.

Osborne branded a 'coward' for sending Coalition's youngest minister to explain his decision to make a U-turn on the 3p fuel duty riseMiss Smith coughed and spluttered as she failed to say where exactly the £550 million to pay for the cut would come from'Do you wake up and wonder: My God, what am I going to be told today? 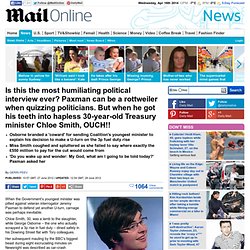 ' Paxman asked her By Gerri Peev Published: 10:57 GMT, 27 June 2012 | Updated: 12:54 GMT, 28 June 2012 Tough going: Minister Chloe Smith was 'sacrificed' by George Osborne by being sent on Newsnight to explain another of his Budget U-turns, it was claimed today When the Government’s youngest minister was pitted against veteran interrogator Jeremy Paxman to defend yet another U-turn, carnage was perhaps inevitable. Chloe Smith, 30, was a lamb to the slaughter, while George Osborne – the one who actually scrapped a 3p rise in fuel duty – dined safely in his Downing Street flat with Tory colleagues.

MPs and their staff make 10,000 changes to Wikipedia pages in bid to hide embarrassing information. Bureau of Investigative Journalism finds 10,000 edits on Wikipedia are directly traceable to within the Houses of ParliamentPages for one in six MPs were edited from within the HousesEdits included removing unflattering facts, adding praise, or slandering political enemies ... and even frivolous edits about Pringles and Harry Potter By Eddie Wrenn Published: 12:39 GMT, 9 March 2012 | Updated: 12:19 GMT, 12 March 2012 Powerful data: But Wikipedia relies on editors to keep the site updated and regulated It is often said that history is written by the victors. 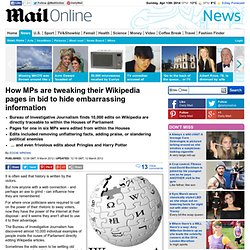 But now anyone with a web connection - and perhaps an axe to grind - can influence how they are remembered. For where once politicians were required to call on the power of their rhetoric to sway voters, now they have the power of the internet at their disposal - and it seems they aren't afraid to use it to their advantage. Other edited entries appear to be simple ego-stroking, such as the entry for Labour MP Fabian Hamilton.