Selling Empire: Posters. The Empire Marketing Board (EMB) produced many posters for billboards. 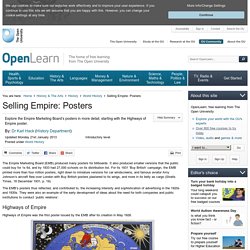 It also produced smaller versions that the public could buy for 1s 6d, and by 1933 had 27,000 schools on its distribution list. For its 1931 ‘Buy British’ campaign, the EMB printed more than four million posters, right down to miniature versions for car windscreens, and famous aviator Amy Johnson’s aircraft flew over London with Buy British posters plastered to its wings, and more in its belly as cargo (Straits Times, 18 December 1931, p. 19). The EMB’s posters thus reflected, and contributed to, the increasing intensity and sophistication of advertising in the 1920s and 1930s. They were also an example of the early development of ideas about the need for both companies and public institutions to conduct ‘public relations’. Highways of Empire Highways of Empire was the first poster issued by the EMB after its creation in May 1926.

It was displayed in January 1927 on massive billboards, 20 feet across by 10 feet high. About the Archives. The AHRC Colonial Film project was made possible through the participation of the BFI National Archive, the Imperial War Museum and the British Empire and Commonwealth Museum. 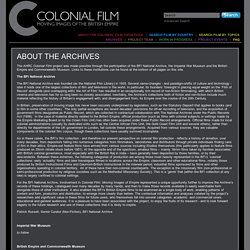 Links to these institutions can be found at the bottom of all pages on this site. The BFI National Archive The BFI National Archive was founded (as the National Film Library) in 1935. Several name-changes - and paradigm-shifts of culture and technology - later it holds one of the largest collections of film and television in the world. In particular, its founders’ foresight in placing equal weight on the ‘Film of Record’ alongside (and overlapping with) ‘the Art of Film’ has resulted in an exceptionally rich record of non-fiction filmmaking, with which British cinema and television has for so long been so closely associated.

In Britain, preservation of moving image has never been securely underpinned by legislation, such as the Statutory Deposit that applies to books (and to film in some other countries). To follow. Byron's Bride of Abydos: poetry reading. HIST103-9.2.2-BritishEmpireDecolonization-FINAL.pdf. ‎www.blackpresence.co.uk/remembrance-day-black-asian-soldiers-in-ww1/ It is often thought that World War One was a European War, fought exclusively by Europeans. 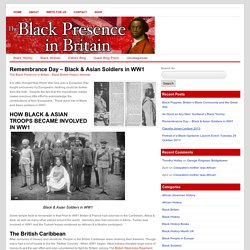 Nothing could be further from the truth. Despite the fact that the mainstream media makes precious little effort to acknowledge the contributions of Non Europeans. There were lots of Black and Asian soldiers in WW1. Black & Asian Soldiers in WW1 Some simple facts to remember is that Prior to WW1 Britain & France had colonies in the Caribbean, Africa & Asia, as well as many other places around the world. The British Caribbean After centuries of slavery and servitude. British West India Regiment By the end of the war over 15,500 West Indians had joined the BWIR and had experienced military service in England, Italy, Egypt, India, France, Belgium, Palestine, Mesopotamia (Iraq) and East Africa. Like Britain, France was a major colonial power. Africans in the French Army WW1 Tirailleurs Senegalais attack the German lines.

America was a racially segregated society. African Americans in WW1 Walter Tull Ghurkas. The Lure of the East. ORIENTALISM REDUX. Turkish Orientalist Images “It is part of morality not to be at home in one's home.” 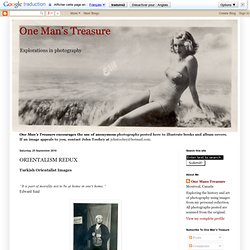 Edward Said His central thesis of Orientalism being that the Orient - specifically the Islamic Middle East - was a European invention; Edward Said had no shortage of evidence to make his point. Descriptions of Constantinople by 18th and 19th century quickly become tiresome in their use of every cliché available. It was dirty of course, sinister, bustling, primitive and so on, and its allures belonged to the senses. Said was most interested in literature and didn’t consider photography, which was a small oversight because European photographers generally sought to confirm all the stories were true. But there’s a problem. If the image of Turks as lazy, dishonest, saturnine and slippery didn’t originate with the people themselves, like a lot of cultures they have always been their own harshest critics. 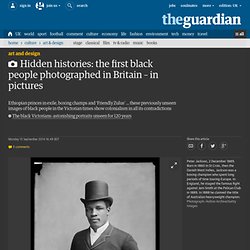 Born in 1860 in St Croix, then the Danish West Indies, Jackson was a boxing champion who spent long periods of time touring Europe. In England, he staged the famous fight against Jem Smith at the Pelican Club in 1889. In 1888 he claimed the title of Australian heavyweight champion. This man was brought to Britain with a Zulu troupe during the Anglo-Zulu War of 1879 and was part of explorer Guillermo Antonio Farini’s exhibition of ‘Friendly Zulus’ in London, 1879.Photograph: Courtesy of Michael Graham Stewart collection. British Empire.