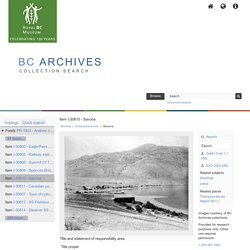 Provided for research purposes only. A Guide to Online Resources for Teaching and Learning about WW1 in Canada. A war effort poster: “Salvage! 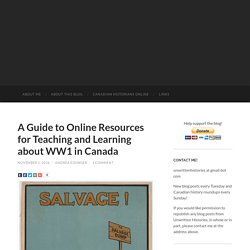 Every Little Helps” / Sia R. Chilvers. Library and Archives Canada, e010696424; Acc. No. 1983-28-190 / CC by 2.0 I’m actually rather surprised to find that no one’s really done this before. Each link will be listed by title, then institution. Catalonia! The colourful story of Jean Caux, the king of the packers - Ashcroft Cache Creek Journal. By BARBARA RODEN November 1, 2016 · 3:03 PM Jean Caux, the packer better known as Cataline. / Ashcroft Museum and Archives When gold was discovered in the then-colony of British Columbia in 1858, thousands of men poured north in search of their fortunes. 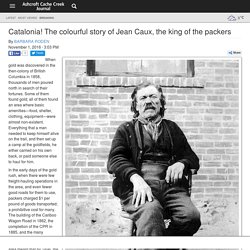 Some of them found gold; all of them found an area where basic amenities—food, shelter, clothing, equipment—were almost non-existent. Everything that a man needed to keep himself alive on the trail, and then set up a camp at the goldfields, he either carried on his own back, or paid someone else to haul for him. In the early days of the gold rush, when there were few freight-hauling operations in the area, and even fewer good roads for them to use, packers charged $1 per pound of goods transported; a prohibitive cost for many. One of the men who came to the area in 1858, along with so many others in search of fortune, was a man named Jean Caux. Cataline died in October 1922, and is buried in the old Hazelton cemetery. 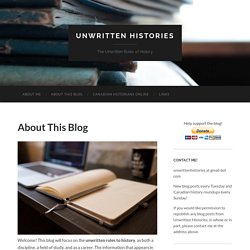 This blog will focus on the unwritten rules to history, as both a discipline, a field of study, and as a career. The information that appears in this blog is the result of thirteen years of doing history at the undergraduate and graduate level as well as six years working as a sessional instructor. Here’s a look at some of the series I’ll be featuring: This is the information that I wish I had known going into university, when I applied for graduate school, during graduate school, and in my early academic career. The kind of information that, as many historians would say, is taken for granted, and consequently rarely discussed.

While I will be focusing on Canadian history, since that’s my background, the information on this site will be useful, no matter your specific field. University of British Columbia Press. About the Book Domestic Reforms tells a complicated story of family and welfare law reform within the context of British Columbia’s transformation from a British colonial enclave to a white settler Canadian province. 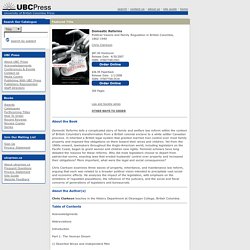 It inherited a British legal system that granted married men control over most family property and imposed few obligations on them toward their wives and children. Yet from the 1860s onward, lawmakers throughout the Anglo-American world, including legislators on the Pacific Coast, began to grant women and children new rights. Feminist scholars have long debated the reasons for these reforms. Why did male legislators choose to depart from patriarchal norms, enacting laws that eroded husbands’ control over property and increased their obligations?

Chris Clarkson examines three waves of property, inheritance, and maintenance law reform, arguing that each was related to a broader political vision intended to precipitate vast social and economic effects. About the Author(s) Home-Historic Photos.